Login to add items to your list, keep track of your progress, and rate series!
Description
1) Oyasumi Darling
Student Kaname just wants to have fun, but his parents won't let him goof off. Staying away from home till they calm down, he barges in on Detective Shiba, a reluctant host who has insomnia. But when Kaname snuggles up to him, Shiba can't keep his eyes open.

2) Love Storm
High school student Rin has horrible taste in boyfriends, they always take his money and the last one was abusive. So when he's rescued by Seiya, Rin's already decided to give up on love. Can Seiya change Rin's mind, even if the sweet seme is an elementary school student?

3) Unstoppable
Seiya's father Takumi ... More...
1) Oyasumi Darling
Student Kaname just wants to have fun, but his parents won't let him goof off. Staying away from home till they calm down, he barges in on Detective Shiba, a reluctant host who has insomnia. But when Kaname snuggles up to him, Shiba can't keep his eyes open.

2) Love Storm
High school student Rin has horrible taste in boyfriends, they always take his money and the last one was abusive. So when he's rescued by Seiya, Rin's already decided to give up on love. Can Seiya change Rin's mind, even if the sweet seme is an elementary school student?

3) Unstoppable
Seiya's father Takumi is a hospital director who loves to tease his live-in lover and super elite secretary Midori. But when a rich father and daughter decide to target Seiya and Takumi, how far will Midori have to go to keep his happy family?

4) I want happiness!
Tatsuya promised his dying mother he would take care of his father and little brother. So when his careless father gets kidnapped by the mob for someone else's debt, Tatsuya has no choice but to make a trade for himself. Morita Kiyonobu hears Tatsuya say he will do anything for his father's freedom and decides to take him up on it...

5) Snow
High class prostitute Shiki is the beloved of the young master of a rich family. But a cold snowy night and a mysterious rounin bring back memories Shiki has tried to forget. Less... 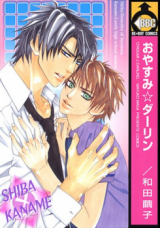 It’s so so
by WhiteIsBlack
December 17th, 2019, 8:34am
Rating: 7.0  / 10.0
The first story is pretty good. The second is goofy and silly. The third is better than the second. I love the fourth story. And the fifth story is sad and short.
Was this comment useful?  Yes

Drawing Style
by kagayaki_kaya
July 31st, 2015, 11:01am
Rating: 7.5  / 10.0
Actually i enjoyed this manga. For the story.
But the drawing styles for "the young age" disturb me. Interrupt my imagination.
For Kaname in Oyasumi Darling: for the head & face with that body is not match. Well the body telling you for the young age. But the face is too adult.
So it bothers me.
And in Love storm. 5 grade with that adult appearance? With that perfomance?
OMG, That's really ruin my imagination.

Well, i gave good score for the story i loved with that drawing style.....
Was this comment useful?  Yes

Polarised
by OmNom
September 8th, 2013, 10:05am
Rating: N/A
There's a significant time gap between the one-shots, thus an obvious quality change as well. I do think the mangaka improved her skills with time, it's mostly visible when you compare the title story with, say, the second one. I won't say this is a terrible manga but rather mediocre at best. In my opinion the title story is the strongest of the bunch, having a decent story line and a super fun characters-combo. The last story is quite engaging as well, despite being a bit short. They're probably the saving graces for the whole manga.
Was this comment useful?  Yes

okay
by Suiren-nyan
May 21st, 2013, 2:00am
Rating: 7.0  / 10.0
Regular yaoi stuff... besides the 2nd -- infamous -- story, lol. Yeah, the guy is 10 or 11 (5th grade in Japan), over 170cm tall and looks about 17-18. He also is more mentally/emotionally mature than his high schooler uke. Ok, obviously a guy like this couldn't exist in rl-- but this is manga and a lot of things that happen in manga couldn't happen in rl, characters often aren't even realistic, etc. So just enjoy this idea or not, please stop looking into this too much (I have seen people arguing on forums if this manga is shota or pedo stuff or not... oh please...) I personally find the idea funny, makes the manga memorable. And it was cute to see the guy wearing a kids backpack

I enjoyed the 1st story-- with the immature 15-year-old uke. He was so funny XD Like his comment after learning about the seme's insomnia... "yay, we can play all night", lol XD
Was this comment useful?  Yes

Holy art style change batman!
by Namiya
January 15th, 2013, 4:07am
Rating: 7.0  / 10.0
The art looks fine in the first chapter, I mean, the seme is totally hot but the uke looks a bit funny and some panels have just terrible anatomy/perspective errors but damn, then you go read chapter 2 and it's such a big step back.... the art is really bad, not nice to look at.
The 2nd story was a horrible excuse to draw a childish spoiled immature seme lol... because no 11 year old is gonna look like that. It's kinda like the movies, you know, where they have 25 year old buff dudes play high schoolers... just worse. Plotwise...well aside from the characters not being very likable, it's alright for an 11 year old to "be in love" and all... I mean kids these days have sex as early as that, so it's not that far fetched... but the looks of Seiya alone ruin it completely anyway.
However, if you read on, the next chapters are about Seiya's smexy father and they are in sensei's better art style again, and there I think, Seiya looks a lot younger already!
Altogether, the stories were not bad, but nothing too memorable either.
I'd recommend it to people who look for a quick, uncomplicated read and anyone who doesn't mind there being a mature looking 11 year old involved......... lol.

Good yet silly
by Mochi__x
August 11th, 2012, 12:57pm
Rating: 8.0  / 10.0
I totally love Kaname XD he's so cute and completely idiotic! Though he is 15... and Shiba is clearly a lot older. (I'm not sure if it mentions his age, but it's definitely a big difference). When Kaname snuggles and dribbles on Shiba I couldn't help but giggle! Hah ^__^
The second chapter is a little far-fetched. I really did enjoy it but there's no way I can believe Seiya is just 11. I mean he isn't even a virgin! Just how old was he when he was "taught" by those nurses?! That's just gross. His relationship with Rin is sweet though, and their age gap isn't that big really (I think it was 5 years?) :]
All the chapters were good, didn't really see the point of the 5th one though. If it was longer then it would've been better but nothing was explained and I was just left thinking "what?"
There's a lot of cute chibis and some silly humour. Also despite Kaname, Seiya and Rin all being under 16, this doesn't come across as shota at all. (Trust me if it was there's no way I would've read it!) So all in all it's a nice, fluffy read ^__^

This is...OUTRAGEOUS
by MangomyTango
September 6th, 2011, 9:46am
Rating: 10.0  / 10.0
Wow!!! The story with the elementary school kid who looks like a high schooler, made me LOL although the humor was quite weird, I couldn't help, but get caught up by all the weirdness xD the expressions are kind of funny too XD the one-shots were a flurry of wtfness and wutness, but I still like it Xd i'm kind of messed.
The art is aight it kind of improved in the sequel. Since I'm a sucker for stories that have an age gap, or just weirdness, I'm giving this a 10.

Um, what?
by varianthart
June 24th, 2011, 11:08pm
Rating: 4.0  / 10.0
This wasn't so good. It wasn't the worst thing I've ever read, but it didn't have a lot going for it. The stories are short and rushed with no character development to speak of. Also, Seiya is 11. Yes. Eleven. This was the youngest character I think I've read about and somehow it was not even remotely shota feeling. There was no way he was eleven, and it wasn't really even funny, just weird. It would have worked a LOT better if they had made him a middle schooler, and the age difference thing still could have been part of the story. Anyway, I digress. This wasn't good, I don't feel I gained anything from reading it. I thought maybe the last story would be the better of the bunch, but it's extremely short so there's not much going on.