Login to add items to your list, keep track of your progress, and rate series!
Description
Nishizuru Yakki is a permanent part-timer, regular customer in a maid-cafe, and 20-year-old virgin. What makes him special is his ability to see ghosts. But ghosts are not monsters, they are mostly harmless. At least our hero can live by simply ignoring them. Yakki never believed in monsters until the day when he meets the girl named Rokka. This cheerful girl appears to have a secret... 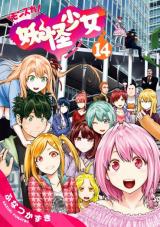 i love it
by akutaishou
October 20th, 2016, 2:00am
Rating: 10.0  / 10.0
MC not like typical beta MC, cool with his word not cliche at all.MC completely original (luffy,naruto,ichigo,gintoki) ORIGINAL!! i mean..story as good as one piece, comedy as good as gintama level, art\ecchi as good as shokugeki so souma.hope will adapted to anime
Was this comment useful?  Yes

A very perverted but good & solid unusual harem manga. Panyanyan
by Swifft
September 11th, 2016, 9:24pm
Rating: N/A
How's it unusual? Mainly with the protagonist, or specifically how he's treated. This is VERY loosely a harem series, since most girls either don't register the MC as a love interest or actually don't like him For a while, the main heroine seems to have more love interests than he does. Personally, I find this to be hilarious. Wrote a long review on the series explaining my opinions. I don't think this series will be for everyone since the otaku loser MC is treated like an otaku loser rather than a harem god, but if that's the convention-break you're looking for, you're in luck. I love this kind of thing. I also think it's a great comedy series with solid action and a pretty OK plot.

Classic but well done
by pomoli
August 5th, 2015, 8:24pm
Rating: 7.5  / 10.0
You'll find everything you think that will be in a generic sexy harem story. But it's well done, and the comedy is actually funny, which is rare in these stories.
Also, the art is excellent. Way too much panchira though, but that was something expected in such a story.

First off, the shounen aspect of this series is the typical MC that supposedly has a lot of potential to become strong. However, every fight is just himself getting beat up to near death state. You know, it's the typical lip service "I will defeat you despite not being able to do anything but I won't give up." Then somehow near the end, he either gets saved by a girl or yell really loud to defeat his opponent. Yeah, you can just yell really loud to power up. Rinse and repeat for every fight.

Second, there's a lot of ecchi. The male MC is the typical pervert that lusts for the silliest of female exposure. However, when the female is willing to let him "peak" for some fan service, he becomes shy and rejects all advances. Uh, what's the point of going after females if you're just going to reject at the last minute??

Third, a lot of the explanations for what's happening with the youkai or his "potential power" is just boring. No matter what is said, it just boils down to the mangaka concluding similar to "just believe my bullshit because I say so." So there's really nothing interesting reading the explanation nor watching the battle because it's all the same at the end. If you watch the first battle, it's the same every other battles.

It was funny for the first few chapters but now it's just boring and very predictable. The only redeeming points were the premise and the pretty art.

I like harem manga.
by TrackKing
March 9th, 2015, 8:21am
Rating: 10.0  / 10.0
Freaking love it. Doesn't take itself seriously, semi- competent mc, cute girls and a supernatural plot line to give it an excuse to call itself a story. People will generally complain because they've seen stuff like this before. Shame on them for expecting someone new from a ecchi harem manga. The whole point of these things are just supposed to be simple to read. Your not going to find a deathnote manga here.

Almost all ecchi harem manga follow the same pattern. The authors main girl that non of the fans like because she's boring is in fact the main characters crush. Then an onslaught of infinitely better girls leap into his lap, while he still try's to chafe the one girl people hate even more because all these badass girls are much better mc's.

It's easy to read, funny, and the main character can fight. Inb4 main character is worthless. Do you not see him taking mad beatings and still standing?

If you want an easy read that updates weekly. This is for you, if your looking for something new and completely original, harem ecchi manga probably isn't for you. They can't all to shokugeki so souma.
Was this comment useful?  Yes

Why does it have to resort to shounen battles?
by great_k
March 8th, 2015, 5:41pm
Rating: 1.0  / 10.0
I was enjoying reading the 1st few chapters of this manga and then we had a super generic shounen battle. MC gets beaten to a pulp but won't give up and wins with 1 hit. LAME!
I was hoping to enjoy this supernatural ecchi comedy series, but it looks like generic shounen battles are gonna happen quite often now that the MC is gonna hunt youkai.
DROPPED!
Was this comment useful?  Yes

Maze Maze Nyan Nyan ♡
by momimomi
March 25th, 2014, 2:35pm
Rating: N/A
After reading the first 4 chapters I can pretty confidently say this is going to be a run-of-the-mill action love comedy (think To Love-Ru). BUT! BUT! BUT! It's written by Funatsu Kazuki! While I tried reading Karei naru Shokutaku because of the awesome art, in the end the food theme was tottaly not my cup of tea. Now, at last Funatsu Kazuki writes the manga which has decent theme and setting. I can enjoy cute girls that do Maze Maze Nyan Nyan. ♡
Was this comment useful?  Yes