Login to add items to your list, keep track of your progress, and rate series!
Description
Takashi has fallen in love with his boss Natsume. He's been through the pain that comes with falling in love with another man many times, yet he can't fight his attraction to Natsume... And now he can no longer be satisfied with his unrequited love. A bitter office romance with a touch of sweetness.

Latest Release(s)
v.1 c.1-3 by Dangerous Pleasure over 12 years ago
Search for all releases of this series 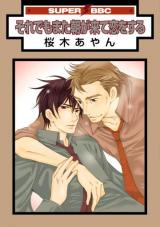 Cute
by varianthart
July 6th, 2012, 11:44pm
Rating: 7.5  / 10.0
Ahh this was cuter than I expected. The story and art were just ok for me, but I really love Natsume. He's very charming, humble and genuine. I would love to have seen him fleshed out just a bit more and given a story which has more to it. Very sweet all the same.
Was this comment useful?  Yes

There is sure a certain age gap between them (Takashi is 25 I think and Natsume is 40 something), but I don't see the typical seme/uke dynamic here. They could have been the same age and it would have still remained the same. They both look manly and act like men, and that's what BL mangas should always be about, and no matter if it was targeted to girls to begin with. I like my men to look like real ones, am I asking too much here!!!!

It is a shame that editors won't publish a long BL story if the two characters are more than 40, what I am talking about!!!! They wouldn't do it even if the two protagonists were only in their 30s, so that's why I have to read one shots or short stories like that to get what I want. Well even in that one, there's only one supposedly "old guy", but still better than none.

I've realized that in BL mangas when I do find oyagis, most of them are shown as perverted and/or despicable as can be, and they often date teenagers or worst, so it is a double NO for me, and that is why it is kind of hard to appreciate such characters in the BL genre.

The story had a nice pace, even for two chapters and a half it was well executed.
Spoiler (mouse over to view)
The boss was attracted to his employee from the beginning, when he invited him several times to go out for a drink, some things he was saying and doing. All these were because he was trying to endear himself to Takashi. He wasn't only teasing him, but it was also an attempt to make the interested party understand.
The fact is that Natsume was so clumsy when it came to express his sentiments, that somehow I found it touching.
The best was when the two of them realized their mutual feelings, but none of them would actually believe that one had fallen for the other

I love when a seme act like a spoiled kid, wanting to monopolize his uke for himself, but not overly possessive or in a cruel way. The mature one isn't always who you thought it would be.

These are the kind of stories I like the best, really down to earth, no popular/good-looking guy, just ordinary salarymen with simple lifes.

When I think about it, the thing that really Gets to me is the way the characters respect each other. Wah... so pure! The amazing thing is that their relationship develops realistically, and that they both act like grown-ups. This manga will have you thinking that it's based on real people -- who just happen to be totally adorable by accident.
^.^
Was this comment useful?  Yes