Login to add items to your list, keep track of your progress, and rate series!
Description
From Juné Manga

On his very first day at a brand-new job, shy Shima is trapped in the elevator with a hungover mess of a guy…who turns out to be his boss! Togawa’s prickly exterior definitely puts the rookie recruit on-edge, but it doesn’t take long before Shima’s every waking thought is invaded by his overbearing yet totally thoughtful superior. Will Shima put aside a history of disappointment in order to take a chance on a complicated relationship?

Latest Release(s)
c.2007-2017 Extra by Steve Scans Saezuru over 3 years ago
c.Booklet by Yaoi is Life over 7 years ago
c.3b by Boys Love Network over 9 years ago
Search for all releases of this series 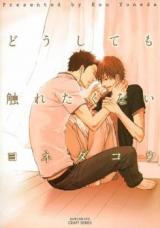 I cried
by Lucassio
December 27th, 2021, 12:14am
Rating: 10.0  / 10.0
It's amazing how much emotion was conveyed in the small little events that occurred. Every chapter ended on an impactful note and these characters are extremely vulnerable. I appreciate seeing all of that. It helps to get attached to these characters and care about what their situation is.
Was this comment useful?  Yes

Still great as always.
by herosusan123
October 13th, 2019, 10:14pm
Rating: 8.0  / 10.0
I've read this a couple times, but this time I re-read it to leave a review. Its just that I've always loved Yoneda Kou's manga so I never had anything to say about them. Usually I leave reviews if there was something greatly lacking/disappointing or if I was really impressed with the art.
With Yoneda Kou's manga, the art is nice, but I don't particularly read them for that aspect. Although I like her drawing style I'm not that fond of most of her character designs. However, her ability to write realistic characters with a dash of exaggeration is just great. In this case, Shima is written to be really shy, but once you get to know him he's actually a snide tsundere who's always way too considerate of the people around him. He's the type of character that has many layers to peel in order to get his real personality which makes sense considering he had past trauma with his previous partner. Then you have Togawa who's really laid back and takes everything like a grain of salt. He has some of the funniest scenes in this manga. The two don't look like a great match at first, but it gets pretty cute when they start liking each other. The character development didn't feel rushed, but there were too few chapters to really accomplish anything. I feel like there could have been more on the background of Shima's previous work situation, and also more non-sexual interaction between the two. Anyways.. its nothing over the top special, but it has everything from funny to sad to cute moments. Its definitely a style of writing that might be a little too stale for some people, but if you liked this then you'll definitely like all of her other works.
Was this comment useful?  Yes

I felt that the romance was rushed.
Spoiler (mouse over to view)
First chapter and they already have sex ... if the guy was truly hurt by his previous relationship he wouldn't let himself be held that easily.
And the story telling wasn't that good either : the interaction between the characters wasn't natural. It's as if they were confiding in each other just because it needed to be explained to the reader. (And I can't believe they were talking about their trauma so soon after they met).

It would have been more interesting to focus on the character who was disgusted with himself for being gay
Spoiler (mouse over to view)
thus bullying the one he loved
but the author didn't do it :/

In conclusion, the overall idea is great but it has a lot of flaws :/

So yeah sadly it's not worth remembering...

Full of emotions
by Himeowchama
February 9th, 2017, 8:19am
Rating: 10.0  / 10.0
This manga honestly gives you one hell of a roller coaster ride. It kind of gives a glimpse of reality on what gay couples are experiencing. It covers the environment around the couple, the inside conflict as well. It's definitely one of the best slice of life mangas out there (as expected of Yoneda-sensei)
Was this comment useful?  Yes

Shima is more than that weak crying uke!
by YouStillDontKnowMe
January 4th, 2017, 4:00pm
Rating: 9.0  / 10.0
Doushitemo Furetakunai is definitely one of my favorite manga, and it's probably because of feels and all quotable quotes I could post on Instagram lol. Probably cliche, but didn't really see because a story is only cliche when repeated and losing its true soul. Not the case for this one. I believe the story went really well especially with Shima, reflecting of how difficult it is for a closeted gay to fully adjust to a new environment when his previous one is such a toxic place.

One complaint I have tho is how it is discredited as a good read because Shima is always crying like a weak uke he seemed to be. Even Deguchi from the spinoff has pointed out the stark difference of their personally and seriously it's weird to devoid Shima of his own personality just because he's been crying when all the cause of it is all justified in the first place! Compared to the typical weak crying uke we all get for most of BL manga, Doushitemo Furetakunai clearly established why Shima is such a crying uke. Put all his insecurities right in his face, one would definitely crumble down especially when to start with you're never confident of existing because the world assumes your kind of being is wrong. What separates Shima to those other weak, crying uke is that his tears are not out of nowhere. He just doesn't burst out crying because mangaka thought it's a nice thing to make him crying but because it's mandatory for the story to make him crying because of his circumstances. I never continued reading the spinoff, but Deguchi is definitely not a crybaby because that's who he is in his own story, but he still did when his circumstances made him so, and so did with Shima.

The sex before love concept here is so believable, compared to the likes of love at first sight or the never a good thing rape=love. Reading the entire manga could justify how Shima and Togawa fall for each other. Just look at the panels, and with their conversations, and you'd get why it happened. Like it's so logical when it seemed not.

All in all, just as I said, it's a cliche but at least with a touch of reality. And that's what matters for me to consider it a good manga.
Was this comment useful?  Yes

I loved Shima's deadpan sense of humor whenever Togawa teased him. They had good banter between them!

It's such a sad story at parts. Shima can't have the things he wants (a family, children) just because he's gay. It makes me mad enough to cry, honestly. What stupid and damaging laws people have...

Shima was so sad trying to do the right thing, and Togawa was so sad when Shima basically told him not to be ridiculous, that what they had wasn't anything at all.

And this is I think the only thing I've read where the jealousy is more of a small joke than anything else (and it's done in a silly, funny way that's not ridiculous).
Was this comment useful?  Yes

Mature discussion
by heocon426
June 19th, 2016, 7:32am
Rating: 9.0  / 10.0
This is one of those romance mangas that actually has poignant discussions about ideas and subjects in relationships. It tells you that your own emotional vulnerabilities and lack of trust in the other person is not just damaging toward yourself, but it also is hurtful toward the other person. Their conflicts are arguably justified. Shima distrust toward his own happiness and Togawa's feeling toward him is reasonable. Shima was hurt in the past and clearly hadn't gotten over it even when he is with Togawa. The social stigma of being in a gay relationship such as being unable to build the "traditional" family can be disheartening. And the yaoi conflict of having a straight guy fall for you gave Shima even more doubts.
The only qualm I have with this manga is that it's not very clear in showing passage of time and things feel like they're moving too fast. Also, it has some yaoi cliches, but they are not too distracting.

Please don't watch the live action movie for any other purposes beside out of respect for the author. The acting is horrendously clunky. The emotional expressiveness and nuances from the manga are lost. The cinematography is nonexistence (seriously, don't pan out of the characters when they're having emotional discussion because you can't see their face or emotions--unless, you're going for the sense of hopelessness of being unable to help them, but you still need lots of body movements and positioning to translate the emotions well)

Live action version!!!
by streetwalker
January 21st, 2016, 10:43pm
Rating: 8.0  / 10.0
I don't really have much to say about this manga. It's good but kind of forgettable. I recently saw a live action version of this manga, however, and the live action is honestly amazing! And not just by live action standards either. Seriously, go watch it!
Was this comment useful?  Yes

Great slice of life manga
by TheAries
August 22nd, 2014, 12:39pm
Rating: N/A
Yoneda Kou writes great manga, and this one is no exception. Quiet, slow-building, and intriguingly introspective, the author invites us to see into someone else's life. The synopsis already states everything that can be said about the story without spoiling it, so I'll just say that the characters' emotions and the tension is palpable on every page and the story is a wonderful reading experience you should not miss!
Was this comment useful?  Yes

BEAUTIFUL
by sejal
May 14th, 2014, 1:21pm
Rating: 10.0  / 10.0
I totally loved this series. Both the couples were beautiful and honest and caring. I am so glad that they got a movie for this- they deserved it. The love scenes were heartwarming. I still look at it sometimes and it fills me with awe. The story was well carried, climax was wonderful. Whether you are a yaoi lover or not, definitely try this.
Was this comment useful?  Yes