Login to add items to your list, keep track of your progress, and rate series!
Description
In the all boy's High School, Jinnan Gakuen, there's a group called Junk! Boys who help people with love problems and situations. No one knows who they are, and thus their identity remains a mystery throughout the school. But Fujino Tomoya met two upperclassmen, the straightforward and sociable Kajimoto Takato, and the mysterious though friendly Sakuma Tsukasa. However, somehow he got dragged into these two second year's 'side job', and became the new member of the famous Junk! Boys team. 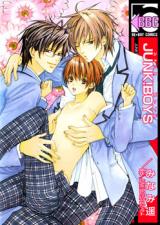 Spoiler (mouse over to view)
the three of them end up going out with each other, because usually one is dejected or just there to mess with them or for fun.

Worth a read, I particularly enjoyed it.
Was this comment useful?  Yes

Absolutely Wonderful!
by emilyslash
February 11th, 2011, 3:00pm
Rating: 10.0  / 10.0
I love it! I adore manga's like this one. I like threesomes, especially when both guys love him, and the best part is that he loves them too and gets to keep both(it's sad that usually, the guy gets to choose only one, so that would mean unrequited love). I've been rereading this every few months or so, and its still just as great as I first read it.
Was this comment useful?  Yes

Takato and Tsukasa are simply THE LOVES OF MY LIFE *-*
Really, they are the kind of characters that should be explored a hundred more volumes because they are both perfect. I simply adore them!!

Problem is...I HATE Tomoya, which makes it difficult for me to like the ending...
Takato and Tsukasa should just be together as a couple and get someone else for Tomoya.

Yaoi scenes and the whole sha-bang. O_o Although I thought most of the hookups the boys did were pretty predictable, it was too cute for words x]
Was this comment useful?  Yes

i also love the little mini-plots, where the three main characters help people with their love problems. altho, both were quite predictable, i guessed both of the reasons/culprits pretty much as soon as we were told the problem...

but still, that doesn't make the story seem at all boring just because its predictable, its actually a very cute, hot, funny read. =D

i'd fully recommend it to anyone! lol.

looking forward to the next installment

[i've only read the two chapters that are out as i write this.]
Was this comment useful?  Yes