Login to add items to your list, keep track of your progress, and rate series!
Description
It costs a drop of blood for one life in the game. Others waste their time playing games, whereas I waste my blood. A dimensional storm befell Earth, and dimensional realms appeared everywhere. Immortals, gods, demons, angels, elves, and many other creatures from other dimensions came to Earth. However, all the mysterious dimensional realms became dungeons in a mobile game. Other people risk their lives to venture into the realms, but I just play the game like crazy.

A drop of blood saves a life.

When... More...
It costs a drop of blood for one life in the game. Others waste their time playing games, whereas I waste my blood. A dimensional storm befell Earth, and dimensional realms appeared everywhere. Immortals, gods, demons, angels, elves, and many other creatures from other dimensions came to Earth. However, all the mysterious dimensional realms became dungeons in a mobile game. Other people risk their lives to venture into the realms, but I just play the game like crazy.

A drop of blood saves a life.

When others play games, their livers explode, and I also play games.

But those mysterious different-dimensional fields have all become copies of mobile games.

Others risk their lives, but I play games desperately. Less... 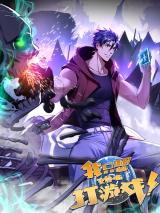 Awesome!
by Yunwu
August 3rd, 2022, 7:13pm
Rating: 10.0  / 10.0
It's really good and unique. The MC has an interesting cheat and becomes OP. But even with the cheat, it's not like he doesn't do any training. There are times he struggles to reach his goal. For ex: even when he gains a skill, he has to practice applying it in reality sometimes. The storytelling is good, and each event has a reason. There are some readers saying the smartphone setting is dumb or stupid...but is it something just anyone can write? If so, then try writing it yourself and you'll see how difficult it is.

I like his aloof personality. I feel like the reason many others don't like this is because, for once, the MC isn't drooling over some girl(s). I mean, finally, we have a decent story where the first character the MC befriends isn't a female, but male. His male friend is rich, and while it may seem like he's forcing the MC to go this place and that place, he really isn't. I mean, each time his friend takes him somewhere it ends up benefiting the MC. And if the MC didn't want to, he wouldn't go.

Overall, it's a fun read that won't bore you. It has a nice concept, and the storytelling is great and has a good pace. It isn't slow or too fast. Hopefully, they continue this way, and the MC doesn't turn into some pervert who is always chasing after girls or is always surrounded by them. But in the end, this can either be a hit or a miss depending on what you're looking for. If you're the type who likes reading something deep, then this probably isn't for you. This a more carefree fun type of story (there are some things that happens that make you curious though).

Oh, and one more thing. If you want to enjoy reading this, I suggest that you don't read it from Dragon Tea. Even if they have more chapters out, their translation ruins all manga/manhua.

Bad
by PZcolo
July 28th, 2022, 6:24pm
Rating: 4.0  / 10.0
The story of a very talented guy that's beaten by a girl and starts playing all day with a cellphone, this cellphone is a special "artifact" or something that lets him get stronger by playing. That's the premise of the story and it's enough to get a good idea on what to expect, the guy spends all the time playing, literally, even when a gorgeous girl tries to flirt with him, he pushes her away to play with his phone. He also seems to be able to assimilate (somehow) his actions in the video game and pull them off in reality, often without even practicing them. It's, imo, a very dumb premise and it's so poorly explained and written that's hard to take anything seriously. At the same time, there is no comedy, so it's intended to be taken seriously... This is my main gripe, the terrible storytelling skills, most of the time it's as if the artist took all the details and explanations in the novel and decided to do without them for the manhua (something rather common in manhua/wa, unfortunately), like when we the find out that the things happening have something to do with his father and how the MC acts to the whole thing.

Character-wise, the MC is a rather stoic fellow, he seems to be impervious to any of the normal feelings of a young male teenager, he cares not for girls, has no real friends (thou he does care for a few people) and doesn't seem to have any interesting other than playing with his cellphone, he's as dull as they come. The only other 2 relevant chars so far are a rich kid that mainly takes the role of forcing the MC to do something since otherwise there is no story, and the girl who beat him in one move. The first one is an ok char, the second is the cold queen tsundere type (probably, just my guess, she appeared twice so far).

The art is ok, on the good side for manhua, and pace is mostly ok, maybe, I find it boring but mostly from the writing and premise.

Overall, it's not very good thou it's at least readable. There's nothing particularly good in the manhua and as said, the storytelling is crap.