Login to add items to your list, keep track of your progress, and rate series!
Description
A mysterious, lethal disease is on the loose worldwide, resulting in a catastrophic death rate of humanity, and the increasing rise of attacks, caused by the living dead.
In Japan, several high school students and a school nurse have banded together to escape Fujimi High School shortly after it was attacked by zombies. The group now attempts to figure who or what was responsible for this plague, and in the meantime, attempt to survive the present apocalypse.

Note: Discontinued due to author's death. 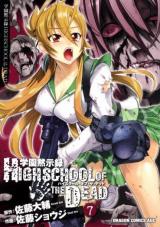 Note: You must be logged in to update information on this page.
Forum Posts Click to view the forum
The end. :(
about 1 year ago
who is at fault?
over 2 years ago
Highschool of the Dead to Resume
over 8 years ago
when h.o.t.d season 2 is coming?
over 9 years ago
Chapter 29
over 10 years ago

The only series that have done the right way of classical zombie apocalypse
by Raiden94
December 20th, 2022, 2:10am
Rating: 9.0  / 10.0
There are tons of manga and manhwa with zombie tropes but in my opinion.. Nothing can top this. I'm not talking about that excessive fan service but the plot and direction of the story. No big and mutated monster like resident evil or running zombies like world war z or retarded military squad or personnel.
I repeat, if you want a classical zombie apocalypse that was done rightly, this is the manga.
If not because of the excessive fan service and author passed away, it would be one of the best manga series.
Also from what I can see, the fan service as of latest chapter had started to ton down.
Haaaah.. How I wish that someone can pick this up and continue the author legacy.

Watch the anime also because it was great. You won't be wasting your time for the plot, action, opening and all 13 ending song.
The excessive fan service is not good but bearable.

Flawed Beginning Turned Me Off
by cecropiamoth
August 26th, 2017, 1:00pm
Rating: 6.0  / 10.0
Suddenly, without being given an opportunity to get to know the MC, or any of the few additional characters who quickly show up, we are flung into full slaughter mode. The characters have been so sketchily introduced that their danger from the slaughter that immediately starts raging all around them makes me say, "Who cares? Everyone's dying anyway. They are doomed for sure."

Then it's just more slaughter of strangers playing out, which the MC amazingly survives.

Apparently no-one ever taught the makers of this manga the fundamental principal that if you're planning to depict an apocalypse, you need to spend substantial time at the start establishing that this is the real world we know that is about to be destroyed, and, most importantly, creating characters who we can get to know and care about enough to care as they later struggle to live through many additional chapters. See "I Am a Hero" for how to do it.

As for the slight ecchi in the story, it's welcome in a story like this because it provides SOMETHING that is attractive and good in the midst of all the killing. In fact, all the killing is both so premature and so immediately overwhelming that I can't believe people can find nothing to complain about in this story except the ecchi. Are all young folks obsessive moralists these days?

Got boring and abandoned
by Baelrusk
September 27th, 2014, 6:56pm
Rating: N/A
Giving it a low rating for a reason. Got boring. Started good then became boring and cliched.
Since there hasn't been a new chapter in over a year (ch30 was released implying it was coming out of hiatus......then nothing else.....at all).
I'd recommend against reading it simply because it's an unfinished work which shows no signs of ever being completed.

They didn't even have the courtesy of axing the thing. Just on hiatus and never saying anything ever again.
Was this comment useful?  Yes

Tonally, the series bounces between very serious to tongue-in-cheek in a flash. It has no idea if it wants to be an ecchi comedy with over the top action or some half-baked drama. And there in lies the issue. The series would be very enjoyable if it would just cut those serious bits out. Cut them out as apposed to focusing on the sincere parts which are obviously not the forte of the author.

Actually writing in general may not be a forte of the author, as the pacing of the manga is rather poor. Case and point: It takes a zombie manga like I am A Hero two and a half volumes to make it out of Tokyo while the cast of HotD is still meandering about with only the simplest development of the characters.

Lastly, the release schedule does the series no favors. This is a series with some potential as an ecchi dark comedy with over the top action, but the writer has little grasp on the concept of storytelling or entertaining and between the pacing issues and release schedule, I'd be in my 30's before this series made it anywhere interesting. Time to put it on the shelf.

LOVE HighSchool Of The Dead!!!!!!!!!!!!!
by Terr0rCakess
July 10th, 2013, 8:27pm
Rating: N/A
haha I still remember watching the anime a few years back...
i got my next door neighbor and a few fb friends to watch it and they found it funny
i either got i love the storyline but not the unneccesary ecchi parts
and vice versa
i personally enjoy the manga and anime
Was this comment useful?  Yes

Good read and genuinely scary
by Fullmetalwin
July 29th, 2012, 9:54am
Rating: 9.8  / 10.0
i think HOTD is a really good manga. yes there is a lot of fan service which is unneeded but what do expect from the artist. the story itself is one we all know and love, the zombie survival. the story is about a group of friends trying their best to survive in a zombie infested japan while they also struggle with their own moral codes.
As of around march/April 2011 the manga has been on hiatus but i think it will come back due to the popularity it has in america and i have also "heard" there will be a season 2 of the anime (fingers crossed) so hopefully it will come back soon since the story is good, the art is good (i cant believe i am saying this but there is a bit too much fan service for the genre) and overall it gives you a chill while reading and to be honest this manga is like the George A Romero of the manga world and is a must read for any zombie fans out there.
Was this comment useful?  Yes