Login to add items to your list, keep track of your progress, and rate series!
Description
From Kotonoha:

One rainy day, the young woman Natsuki encounters a high school student in the street. Acting on an impulse, she gives the girl her umbrella and walks away. It turns out later that the girl, Michiko, is the younger sister of Natsuki’s sister’s newly-married husband. Even though Michiko has a difficult personality and doesn’t open herself to others easily, she seems to be attracted to Natsuki. Thus begins an unusual friendship between two unlikely characters who need each other more than they first realize…

The main story (Cotton) was released as four chapters. There are... More...
From Kotonoha:

One rainy day, the young woman Natsuki encounters a high school student in the street. Acting on an impulse, she gives the girl her umbrella and walks away. It turns out later that the girl, Michiko, is the younger sister of Natsuki’s sister’s newly-married husband. Even though Michiko has a difficult personality and doesn’t open herself to others easily, she seems to be attracted to Natsuki. Thus begins an unusual friendship between two unlikely characters who need each other more than they first realize…

The main story (Cotton) was released as four chapters. There are also four additional stories: 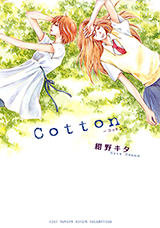 Pleasant
by calstine
March 1st, 2015, 3:01am
Rating: 7.2  / 10.0
I expect nothing less from Konno Kita, who writes some of the most peaceful and lovely short stories I've ever had the pleasure of reading. If you're the type who expects melodramatic romance and a run-of-the-mill love triangle the moment you see that the demographic is josei, I don't recommend Cotton at all. There are subtle themes of romance (not GL) in most of the stories, but it's done in a way that's very calm and mature (in the adult, prudent sense; not in the smut sense). This might sound boring and uneventful to the average romance novel/manga fan, but being free of the typical love drama makes it very refreshing to me personally.

Also, I'd like correct the false impressions that tekiteki's comment will undoubtedly engender. While I'm sorry that she fell in love with someone who played with her feelings, that is patently irrelevant to Cotton, and I'm befuddled as to why she found it necessary to spill out her sob-story here. Michiko is a kid who is simultaneously spoilt and lonely, and who, because of her upbringing, is incapable of connecting with people in and around her own age. She's the one who latches on to Natsuki, not the other way around, and she's nowhere near clever or cunning enough to toy with the older woman's emotions. She "made Natsuki cry" because she thought the only person she'd ever befriended was indulging her with ulterior motives in mind, and she "told her she loved her" when she realised this was not the case. Natsuki is not in love with Michiko: she has a good relationship with a nice guy and I highly doubt that she'll jeopardise it to chase after Michiko like tekiteki seems to think she will. I'm not saying Michiko's a great girl, because she isn't, but she makes a much more interesting character for the story to explore than a "great girl" ever could have, and there are definite hints towards the end that her entitled attitude is improving - if only bit by bit - due to Natsuki's guidance.

The other oneshots, while too short to warrant individual comments, leave you with the same feeling of sedate happiness, though the themes and mood of each one are different to those of the title story.


All in all, a charming little collection that's great for a quick read, especially when you're feeling stressed.

well done, but i prefer to avoid this type of girls
by tekiteki
October 28th, 2012, 3:12pm
Rating: N/A
Once i befriended a girl like Michiko, and i was also older than her, just like Natsuki ^_^, and nearly in love for almost 2 years (actually, i was in love, and i still like her from afar ^^). But she never truly cared for me. She was arrogant, rebellious, liked risky things, and liked to criticize everyone and everything (except herself). And while our friendship was all great and interesting and full of adventures, it lacked love and tenderness and sincerity from her side. Once I realized it, our friendship started to crumble. Because I didn't really need adventures, I wanted us to be true friends *^^* And I see it all in Michiko, and just can't admit her relationship with Natsuki as a friendship...
Spoiler (mouse over to view)
The scene where smiling Michiko says that she loves Natsuki only after Natsuki begins to cry, driven to rage by Michiko, - oh, such a nostalgia)). I'm sure, she will hurt her and insult her again and again, until Natsuki will get sick of it and will go away ^-^;
(oh, sorry for a long comment)

Cute but lacking spirit
by Saons
September 1st, 2012, 10:27pm
Rating: 6.5  / 10.0
It is rather bland, I was saddened to find. It has heart and a good basis for a cute little story, but it still feels like it's pushing too hard to be something it isn't. Too much is left unexplained, though when they are explained, it is done so very poorly. It wasn't a bad read, but it wasn't intriguing either. Pass over it, I suggest.
Was this comment useful?  Yes

Cotton
by akari_mizunashi
January 28th, 2010, 9:06pm
Rating: 9.5  / 10.0
Despite the shoujo-ai tag, this story could easily be read as nothing more than a chronicling of the growth of a female friendship. It's warm and gentle without ever being too sweet, letting it remain realistic. If sharing my umbrella with the next sad-looking girl I see might grant me a friendship as comfortable as this one, send me the next shipment of umbrellas.
Was this comment useful?  Yes

Comment
by LexXxich
March 4th, 2009, 12:02pm
Rating: 8.0  / 10.0
No yuri here. He-he. Although nothing really happens in this manga, it does leave a warm feeling. Note: loved Michiko character design, she looks somehow like a cat.
Was this comment useful?  Yes