Login to add items to your list, keep track of your progress, and rate series!
Description
Your body is their business! Five young students at a Buddhist university, three guys and two girls, find little call for their job skills in today's Tokyo...among the living, that is! But all that stuff in college they were told would never pay off--you know, channeling, dowsing, ESP--gives them a direct line to the dead...the dead who are still trapped in their corpses and can't move on to the next reincarnation.

The five form the Kurosagi ("Black Heron”-their ominous bird logo) Corpse Delivery Service: whether suicide, murder, accident, or illness, they'll carry your body wherever it ne... More...
Your body is their business! Five young students at a Buddhist university, three guys and two girls, find little call for their job skills in today's Tokyo...among the living, that is! But all that stuff in college they were told would never pay off--you know, channeling, dowsing, ESP--gives them a direct line to the dead...the dead who are still trapped in their corpses and can't move on to the next reincarnation.

The five form the Kurosagi ("Black Heron”-their ominous bird logo) Corpse Delivery Service: whether suicide, murder, accident, or illness, they'll carry your body wherever it needs to go to free your soul! The kids from Kurosagi can smell a customer a mile away--it's a good thing one of the girls majored in embalming! 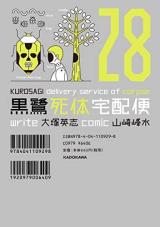 Note: You must be logged in to update information on this page.
Forum Posts Click to view the forum
Hi, any group is interested in this project?
over 12 years ago

Not actually dropped by Dark Horse
by roastedpekingduck
May 5th, 2020, 11:18am
Rating: N/A
Figured I would start contributing notes and remarks again to this site. MangaUpdates is still the best manga database out there IMO. It's a pity that people have concentrated their reviews on Amazon-owned GoodReads.

I'm not too far in yet, so this is not a review. Rather, I would like to correct Pacific.Mint's note by saying that in the past couple of years, Dark Horse has actually released a couple of more omnibus volumes for Kurosagi, so the series is not officially dropped. It sounds like they are giving it another chance and seeing if omnibus sells can convince them to pick the series back up. Unfortunately, with the COVID-19 pandemic, it does not look like sales of the new omnibuses are going to be high, but I do recommend people pick up those volumes to encourage Dark Horse to keep going. @Dark Horse, this does mean that you'll have to reprint the OOP omnibus volumes.
Was this comment useful?  Yes

Rather brilliant
by arouraleona
February 4th, 2014, 6:20am
Rating: 9.0  / 10.0
The notes say that the author wanted to create something truly horrifying. That it was odd how we took zombies for-granted. I found THAT odd, since this manga is often quite humorous, and forced to take its zombies for-granted since un-deading the dead is what the KCDS does.

Still, it is often quite horrifying. I will probably be haunted by the snail thing for years to come. The American bug scientist was amusingly stereotyped (from Ohio...ohayo? get it? haha). The scarred boy/spirit/Crime scene cleaner/possible villain/WHAT THE HECK IS HE?! is a fantastic mystery, and one I'd like solved.

In other words ... it would totally be awesome if this would get picked back up again. It's clever and funny and gory as all hell. And rather a bit brilliant.
Was this comment useful?  Yes

Wish someone would pick up
by Pacific.Mint
January 27th, 2014, 3:27am
Rating: N/A
The English publisher dropped this series. It's been a long time since I read it but I remember I found it very entertaining. It was fun, refreshing, and scary enough. I hope I will be able to finish it.
Was this comment useful?  Yes

wow
by simpleeyelid
August 15th, 2010, 2:04pm
Rating: 10.0  / 10.0
for the criticizers, have you read most of the chapters.
And it is really difficult to maintain the flow with so many (so far) interesting stories, while the main line is gradually revealed.
it is not 10, but I do not hesistate to give a 10 to recover what you have done to pull down the rating.

yes
by mono-sama
August 5th, 2009, 2:39am
Rating: 9.0  / 10.0
different enough to be interesting, this series has captured me, still only in the first volume, but i hope it stays this good all the way through.
the art is crisp and simple, but conveys everything very well.
Was this comment useful?  Yes

big pile of meh
by ngebe
December 14th, 2008, 4:23am
Rating: 5.5  / 10.0
i thought that the long volume 2 story arc was the worst thing i read since mpd pscyho. retarded plot, idiotic motives and dialogue a 5 year old could match. the whole volume is laughable at best. luckily it goes back to short predictable story arcs where all the shortcomings of otsukas writing arent so blatantly exposed. it is getting rather repetitive lately though
Was this comment useful?  Yes

GREAT stuff here
by raphiq
July 29th, 2008, 2:01am
Rating: 10.0  / 10.0
This is a manga that's worth your time and money. Very interesting story and characters blended in with high creativity and humor. If you love anything about ghosts, ayakashi, or youkai in general, you'll love this (although I don't think there are actually any youkai per se in this series).

And as a response to the previous post here on mangaupdates.com, I have to say that the poster couldn't see past the surface of the sidestory. It's difficult to understand some parts of a Japanese supernatural manga if you don't know at least some Buddhism, so read a little about Buddhism if you get lost. Also, the author was trying to tie in some "Western" paranormal elements with the alien case, so that can't be overlooked lightly either. With that said, go read and enjoy this series~

Excellent but... a bit disappointing
by VampireBanana
June 11th, 2008, 3:04pm
Rating: N/A
The first few volumes were very good and the pacing, story, etc. were very tight. The stories were interesting and laced with a certain dosage of black humour, with supernatural intrigue. And the characters were rather varied and provided contrasting and vivid dialogues and insight into the various stories.

However after a while, the writing crumbles and descends into some cheesy sub-plot about aliens. Furthermore, the "cases" weren't as interesting anymore and the "extra" story just didn't do the main story any justice. It'd have made sense if it'd been some sort of costume play in a historical setting but as it was, the story was nothing better than a sub-par story that contributed nothing to the main story.

Perhaps it's me but the series lost its' momentum after a hiatus. Whether the series will regain its' stellar storytelling, remains to be seen.

supernatural is so nicely crafted in that at moments I take it for normal. like I see that everyday.. that kinda freaks me out actually. well written, original, dark humor, nice art.. that's all. ;D
Was this comment useful?  Yes

A great concept...
by pearlesque
April 15th, 2007, 1:04am
Rating: N/A
A very unusual, interesting manga with a dash of dark humor. I love weirdly existential stuff like this. Plus -- dead bodies! I've always liked stories with a high body count, but this one's unusual because it doesn't contain the usual, frenzied pre-death violence. Even the violence in this manga has a strangely quiet feel to it -- I like it, it's different from the usual gory fare I indulge in.

If you're looking for something a little edgy and out of the mainstream, this manga will suit you just fine.