Login to add items to your list, keep track of your progress, and rate series!
Description
A 19 year old girl with a rare growth disorder that leaves her in the body of a small child meets a boy with a mental disorder, who has the mind of a small boy in a 17 year old's body. A Friendly Winter shares with us the endearing story of their day-to-day lives, joys and tribulations. 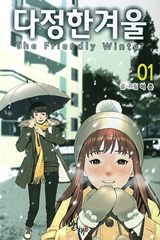 This is not a romance!
by hotarusasaki
December 15th, 2015, 4:29am
Rating: 7.0  / 10.0
Perhaps most of you are more observant than me but I immediately thought this was a webtoon that fell under the genre of romance, I think it may have been the description that led me astray as it sounded like a boy meets girl kinda thing...but no, it does not come under the romance genre. Yes, it has it as a subplot but it's not what the series is all about.

Spoiler (mouse over to view)
Because seriously there is soooo much emphasis on Da-jeong and Min-seong together and how they were never going to abandon each other and will spend everyday together, and that they're the happiest next to each other, all innocent hints that they want to spend the rest of their life together, yet suddenly it's hinted that the oppa considers Da-jeong as his girl friend or maybe just friend that is a girl?!? Yet then Da-jeong says that she's going to the amusement park with Min-seong, so is this a date or just taking the little brother to have fun? But then I realised that this is not a romance so Da-jeong and Min-seong just want to be best buddies that spend their entire life and every day in the future together...And Oppa is just someone who is joking about Da-jeong being his girlfriend to stop his friends nagging, oh btw I was fully expecting him to come out and say he was gay, and I'm sad(?) that he isn't XD Ahem, but anyways, am I the only one surprised? The Oppa seemed 100% side character and he never did anything much except comfort Da-jeong like how you'd comfort a child, he never seemed to /love/ Da-jeong as much as Min-seong. But really they're both great guys so I don't have any complaints, I'm just very surprised. And back to my point, this is why mindset matters, I read all the promises between them as a development to a romantic relationship, when actually they can be read as just simply the care between one human to another.

Now, onto the actual story... I think what drove the story, at least for me, is the effects of empathy. If you don't really empathize with anyone or relate things to yourself you are unlikely to enjoy the story as much or find it touching. For me, I was able to empathize with the family side of things, and those were the ones that made me cry the hardest... However, I do think that the story did have a bit too much crying in it, crying definitely works well on the occasion to emphasize something but if everything is being emphasized then nothing is... It felt like almost every chapter had some crying that I eventually became numb to it. It's a sweet slice-of-life that doesn't really have a goal/plot, it's just life problems.

Hmm, I don't really know how I feel about the story, I think the author did an amazing job and so the art is quite nice! It's got a unique plot idea and characters. So just looking at those things it's a great piece of work.. but I don't get the feeling that it's better than most pieces, above average certainly but not the best so in a way I feel that it's overrated...I'm not trying to deter you from reading but rather to just maybe keep your expectations realistic, it is a very nice story that you'll want to keep reading

I cried constantly, but not the frustrating tears or when you're weeping like no tomorrow, just tears that run down your cheeks. I had to get tissues, for real. I've never needed to actually do that before. It's the the kind of tears you cry when you get really sad, but ones when you are moved.

This webtoon will drag you along for a slow ride. A slice-of-life with a pacing and plot that just flows and takes you along. It has a bittersweet taste, will lots of love and touching realationships. It's beautiful. Girl, boy, elder, whatever you are, read this! It's not a tragedy, it's a story with characters you simply start to care about. If anything, it makes you feel.
Was this comment useful?  Yes

I cried...
by aiish
June 25th, 2014, 1:24am
Rating: 9.5  / 10.0
This manga was sooo good I cried so many times times!!! Sad parts, happy parts, I bawled. Gosh this manhwa is everything a feel-good and slice of life storyline should be. I loved the story, characters, heck the only thing I didn't like was that it ended!!! And it would had been even better if they showed us who she would marry.... In my heart I want it to be Min Seong, but she may have ended up with her oppa. Not that I mind that too but if only miracles can happen. Because I'm sure he'll remain internally a seven year old kid. ;...{ XD and I would love to see her as a mother and how she will cope with it. Anyways such an awesome manhwa 9.5/10. I took of .5 because I wanted more. XD
Was this comment useful?  Yes

Thank you for this manga
by qu1eet
April 26th, 2014, 12:59pm
Rating: N/A
This manga made me cry. I'm a 20 year old man and I cried huge tears.
Thank you world for having such awesome manga such as this that moves my heart to such a degree.
Was this comment useful?  Yes

Smiles and tears mingle....
by bakerygirl
September 27th, 2013, 7:55pm
Rating: 10.0  / 10.0
I was expecting the story to be more focussed on romance(its been wrongly tagged in mangahere). Let's just say i was pleasantly surprised. While reading this i realised just how many important things happen in our day-to-day life without us even noticing them.

this webtoon is basically a slice of life of two unusual people. though it initially focusses more on their friendship, later it delves deeper into da-jeong's family relationships. I felt that the plot was very realistic in the manner that nothing is resolved instantly. Every conflict takes its own sweet time during the duration of which the characters develop wonderfully. Personally I liked da-jeong the best. she is not perfect but perfect(in a way).

Some people may complain about the lack of humour in the second half in comparison to the first. However the manhwa-ka apologised for that in the afterword. And i hope that future readers overlook that too because this is one webtoon you must at least try reading.

must read!
by miraclewisher113
May 13th, 2013, 9:44pm
Rating: 10.0  / 10.0
OMG, that was so beautiful! I loved the art, the characters, and the plot! It was something new for me which is always nice! the author did a great job of portraying the characters. This is truly a gem.
Was this comment useful?  Yes

Everyone should at least try...
by Tatania
March 29th, 2013, 5:57am
Rating: 8.0  / 10.0
This story presented an interesting glimpse into the lives of two characters that are definitely not commonly found as protagonists. With each chapter I was drawn in by the two mains, and I can honestly say this story has softened my heart more to those with disabilities. It's a sweet story that focuses on the growth of two people who had troubles with just that.

Plot- The plot is quite like a slice-of-life and follows the events of Da-jeong's life primarily. The direction the story takes was not quite what I expected; going down a road centered more on Da-jeong's family. The plot was well paced, and included so many heart touching moments, I thoroughly enjoyed all the messages the story gave about love and family and friends and more.

Characters- The characters drove the story, and so were an integral part of the work. I enjoyed the depth of the characters, especially Da-jeong. She is a good girl, but sometimes she acts in unpleasant ways with her sharp tongue. It was interesting to watch both her and Min-Seong grow as the story progressed. Some people have complained about how much Da-Jeong cries, and I do have to admit that at times the crying reactions should have been lessened, but all in all she reacted in a very understandable and realistic manner.

Art- It may not be extremely pretty or ornate, but it was simple and cute and fit the story nicely.

Other- I enjoyed the story thoroughly and feel it's a story all readers should at least try. It has so many lessons that the world should learn. Selfishly, I wish the ending was a bit more closed. I realize that it's a very realistic work, and just like in reality it ends with the characters’ lives continuing on. I just wish I could have seen more I guess!

Too much crying
by SilentFaltrnLesrWatr
March 24th, 2013, 12:10am
Rating: 8.5  / 10.0
This series was good but there was too much crying, also it was a little melodramatic. It seemed like the author wanted there to be drama but the drama was kind of mixed in together in some what of a mess. I would have enjoyed more conversations between the characters and also I thought there was
Spoiler (mouse over to view)
romance? When I first looked at this series it had a romance tag, but it is not there now. I am glad because romance would have not worked out with the two main characters at all.
Overall it was a good concept that just needed a little bit of work.
Was this comment useful?  Yes

Everything that is needed
by Lorska
February 17th, 2013, 2:34pm
Rating: 9.0  / 10.0
I don't have to say much. This is exactly what a romance slice-of-life drama needs:
serious premise, nice art, pleasant und diverse characters, heart-wrenching drama, heart-warming scenes, and a slowly expanding plot.
Is this realistic? Does this show the typical life of handicaped people?
Probably not.
But isn't that fine?