Login to add items to your list, keep track of your progress, and rate series!
Description
Karasuma Touji and Yasobe Homura have been secret lovers for the past 4 years. However, their families and respective groups are long time rivals. With Touji destined to take over as head of his family, as well as the group, can their relationship survive? 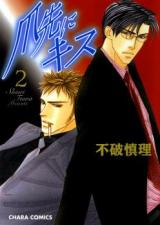 Hmm
by OmNom
June 6th, 2018, 12:14pm
Rating: N/A
Not quite sure how to describe what I'm feeling right now about this spin-off. I actually like how the mangaka portrayed the main couple's relationship; you can clearly tell how much they mean to each other through their actions as well as inner monologues. That's something I always appreciate because I much prefer subtlety and nuances compared to constant confessions of love every single page which is never more romantic. But at the same time I do wish the pacing was tighter and the execution more polished than this to make readers truly engaged in the story rather than just tagging along, if you know what I mean. I hope there'll be improvement on that front in the next and final instalment in this series.
Was this comment useful?  Yes

Unbearable uke
by mtmt1311
February 19th, 2013, 6:34pm
Rating: 6.0  / 10.0
I've seen many indecisive uke and miscommunication between couple but I have to say this has the worst of both.
Spoiler (mouse over to view)
While the seme has to work his butt off for them to be together, the uke just almost assumed everything himself and slept with a guy just because he is UNSURE. Afterward, he dumped his guy and left his guy heartbroken (you can see that in the prequel). The seme is nothing more than an arrogant jerk. He did not even bother to tell the uke about the plan
Seriously, this is the most pointless yaoi ever since their tension shouldnt have happened at all. The seme looks cool but the uke looks more than a nerdy salary man than a yakuza.
Was this comment useful?  Yes

But still I couldn't put it down. Starting the story in the middle of an established relationship was pretty nice. I liked both characters. Thank god neither was an uke or seme stereotype (like the younger brother in the prequel), they were just two nicely defined characters. Homura the composed and cautious one, and Touji the charming and manipulative. I liked how Homura loosened up in Touji's company. I could understand his fears and wanting to keep the relationship secret, there's gang politics involved after all. Touji's fighting spirits was endearing and his possessiveness saved him from being too perfect.

Spoiler (mouse over to view)
Don't take me wrong, there were times I wanted to slap either of them. Touji cooks up his brilliant plan (it IS a pretty brilliant plan actually) without consulting Homura and then is surprised that his calls aren't returned? I get that part of his reasons is wanting Homura to do the "stop this marriage!" routine but this is Homura here, and one thing he does understand is gang politics, especially one pertaining a newly-minted clan head. It was exactly a type of scenario a person like Homura would have been preparing himself for, knowing that Touji would be a clan head one day. On the other hand, Homura taking Kyouya to bed after his heart-break? I could understand that he was in an emotional hell and wanted to ease the pain, but using the poor kid like that was pretty low. Well, it's not like I didn't want to occasionally slap Kyouya either because when he decided to pursue his boss who he knew was in love with someone else, he was asking for the heartbreak. I still felt sorry for him at the end. In fact, throughout the story I felt sorry for all three of them but they all managed to pull through.

I would rather have done without the "omg he could die, why I never told him I loved him!" part but it was a very enjoyable read nevertheless.

Good story, but too drawn out
by raketsuban
June 8th, 2012, 8:06pm
Rating: N/A
For most of the two volumes comprising Tsumasaki ni Kiss, it’s a ‘bloodless’ yakuza story centred more around Homura and Touji’s business interests and romance, rather than the criminal activities of their rival groups. I couldn’t shake the feeling that the yakuza element was just a label, because it might as well be a normal corporate BL story. And for all that the premise seems rather Romeo & Juliet-ish, even the manga’s political/business intrigue is quickly subsumed by an angsty (and extremely annoying) love triangle.

Homura, despite his usual cold composure, has a mean strike a mile wide. This comes back to bite him in the proverbial when one of the hosts at his club, Kyouya, demands he fulfil his promise of a date for reaching the club’s #1 spot. Kyouya’s sheer perseverance and puppy dog eyes, even in the face of Homura’s constant and cruel rejection, fails to be endearing.

Wonderful! Bravo! Fantastique~!
by jellaaay
December 18th, 2010, 9:46pm
Rating: 8.5  / 10.0
One of the most beautiful stories I've ever read. I was awed by how the plot was well planned. From the very beginning you could tell they were madly in love with each other.
Spoiler (highlight to view)
Touji being cunning and possessive. Homura being overly concerned and..(well er since he kept denying that he was in love in the beginning I guess you could say "later on" lol) But even so I understood Homura's fear of their relationship leaking out.. If the latter was to happen they would be forced to seperate, right? That was Homura's biggest concern. On the other hand, we have Touji who was convinced that he wouldn't care less if people were to find out about them. Plus he was willing to give up anything for Homura. But then again, we shouldn't have underestimated his non-chalant attitude since he came up with such a manipulative plan. I mean, what a genius! Invent a false rumor which would result into what he expected, which would then result into the odds turning in his favour..and voila~~ he could work with Homura and they wouldn't be rivaling groups anymore. Ahhh, it was all for his beloved <3
I love Touji's character so much. I love how he was written. What a great seme, really. His motives were really shown. He wasn't afraid to express his feelings at all.. he was like showing everything Homura was afraid to show himself. I'm glad that towards the end Homura realized that him being so scared of getting hurt RESULTED IN hurting Touji instead.

And ugh about the other party (or should I just say THE NUISANCE),
Spoiler (highlight to view)
I'm sorry even though Kouyu's character was cute I still dislike him AND disliked Homura during those times. It was unecessary to keep Kouyu for more than a night. If he needed comfort then fine just one night would do. But gahh that host kept sticking to him. Plus he should've just answered Touji's calls! And BE A BIT MORE DEMANDING! I understand Touji wanting Homura to become even just a bit selfish. I love when he said "Just tell me not to get married and I'll do it..bla bla" I was going kyaa~~all the way. BUT BUT when Homura cried so much in the hospital when he visited Touji I was about to tear a bit at that moment. I was thinking "you jerk NOW you realize how much you really love him" Ahh really, he was such a stubborn uke!
I just really love the development of this manga. Even Tomo and Tamaki showing up as cameos. The art was great as well. I LOVE THE CHIBIS! (>o<) it was well done so it made the read even more worthwhile. You might find it TYPICAL-ish in the beginning but no worries my dear yaoi fans

the story will keep you interested enough to finish it.

Excellent
by misosoup
December 10th, 2009, 5:25pm
Rating: 10.0  / 10.0
This is one of my all time favorites. An intense love triangle between yakuza and a host. It follows like a drama that you can't stop watching.The characters are flawed and even
vulnerable at times, but in the end they come to a satisfying resolution.

Getting Better...
by MightyMaeve
November 15th, 2009, 2:29am
Rating: 8.5  / 10.0
This second book in the series is from the perspective of the 'calmer' of the two overprotective brothers in Absolute Fated Equation. It is consecutive chronologically.

Touji was arrogant and smirky. Initially, I was not convinced that he truly loved Homura, since he was more focus on pissing Kyouyu off. By C3, my mind started to change. The story was woven to rivet me to my seat and get my heart involved with these real and imperfect men and their struggles.

All three perspectives were interesting: one man agonizing, another man supremely jealous, and another heart broken and all three--desperate.

The emotions--fear, happiness, doubt, jealously, passion--were all illustrated with an adept hand. Fuwa's art improves over the years.

I was delighted to see that the third man's story continued in Gravity Eyes, also in chronologic order.
Was this comment useful?  Yes

Super loved this!
by PrettyAyumi
October 12th, 2009, 7:39am
Rating: 10.0  / 10.0
Excellent combination of fabulous art, smut, and most important of all, Superb story line. I like a bit of angst in my yaois especially if it all ends well in the end.

Ugh, this manga deserves better review than this. All I can say is, read it, read it, READ IT!!!
Was this comment useful?  Yes