Login to add items to your list, keep track of your progress, and rate series!
Description
NightS
Masato Karashima is a "transporter", a man paid to smuggle anything from guns to drugs to people. When he's hired by yakuza gang member Masaki Hozumi, he finds himself attracted to the older man, and what starts out as a business transaction quickly spirals into a cat-and-mouse game of lust and deception. In

Kanjou Spectrum (Emotion Spectrum)
A high-school student tries to be a good wingman for a classmate, with an unexpected result.

Reply
Told from the alternating perspectives of an emotionally reserved salesman and the shy mechanic who's in love with him.

Night One Month After
A short ... More...
NightS
Masato Karashima is a "transporter", a man paid to smuggle anything from guns to drugs to people. When he's hired by yakuza gang member Masaki Hozumi, he finds himself attracted to the older man, and what starts out as a business transaction quickly spirals into a cat-and-mouse game of lust and deception. In

Kanjou Spectrum (Emotion Spectrum)
A high-school student tries to be a good wingman for a classmate, with an unexpected result.

Reply
Told from the alternating perspectives of an emotionally reserved salesman and the shy mechanic who's in love with him.

Night One Month After
A short story (8 pages) that takes place one month earlier than "NightS dj - Another Story" (thus one month after events of "NightS" 😉 , when Karashima first time visits Masaki after he discovers his whereabouts. 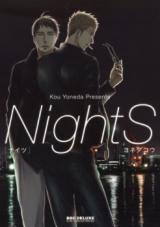 Note: You must be logged in to update information on this page.
Forum Posts Click to view the forum
Question
over 12 years ago

Yoneda rocks.
by sofistree
September 24th, 2016, 11:12am
Rating: 10.0  / 10.0
I always LOVE Yoneda's art. Love it. More than any other art I've ever seen for a graphic novel. It's so beautiful and strong and the balance of light and dark and the positive and negative spaces are awesome!

The first story (NightS) is amazing. I adore it so much. I would read a whole book about them in a second. Their personality are great and different from the other one, and I like the twist at the end.

The second story with the high schoolers is pretty dang cute. It's something of a classic trope, but Yoneda does it so wonderfully that it feels fresh and fun. Even her side characters are interesting and fleshed out. I loved the door slam scene at the very end! Haha! That poor friend.

The one with the mechanic and the salesman was bittersweet. It left off on kind of an ambiguous ending. It was good, though (of course it was). It was probably my least favorite, though (which kinda sucks because it had the most chapters by far).
Was this comment useful?  Yes

♥
by shani
September 9th, 2015, 7:30pm
Rating: 9.0  / 10.0
I remember reading Kanjou Spectrum ehem-7-ehem years ago. It was just a one-shot then and it's used to have its own page (lol) and despite-or because of?- its simplicity and predictability I fell in love with Yoneda Kou's work just like that, boom. Seriously, how talented is she? I cried and begged my editor to pick it up to translate it into our mother tongue but alas another team was faster. Sigh. I might be feeling nostalgic but the cute and cozy high-school love story (not even yaoi!) is still one of my favourites.
KS, 10/10
the rest, 9/10

P.S. I had no idea there was "the rest"... Funny how i decided to visit an old friend but instead met their whole family. What I call a nice surprise.

Realistic characters and relationships
by Bedouin
July 21st, 2014, 10:38pm
Rating: 8.5  / 10.0
I seem to be the only one here to find "Reply" to be the best story! It's touching and very realistic. Yoneda Kou made the setting an integral part of the story, and I like that there isn't that BL trope of how "everyone is gay and no one remarks on how it isn't really the norm". Her characters are imperfect and struggle with their feelings. From what I've read of her works so far, she also doesn't do the "rape is love" trope which is the biggest peeve I have with BL.

The only problem is, as someone else pointed out, that it's difficult to figure out who is saying what. You have to guess from the context, which means you have to flip back to re-read many pages.
Was this comment useful?  Yes

one of my favourite yaoi
by kidoraku
March 6th, 2014, 5:08am
Rating: 10.0  / 10.0
I just love all of her works, this is the next masterpiece, she shows gently all complicated human feelings, moods and relationships with her unique, pretty realistic drawing style, good (bad? dirty? lustful?;p) taste and lots of humour. Love scenes are also kind of eye candy. When I read her works it fels like I'm watching real human beeings. First story is my fav from this book.
yeah baby! 10 points
Was this comment useful?  Yes

Hot!
by homemadekazoku
October 28th, 2013, 11:20pm
Rating: N/A
Yoneda sensei is really talented mangaka.
Her characters drawn well and captivating, although it's only one shot or two shot (there's a sequel)
The story is short but enough to satisfy you.
Recommended

Kanjou Spectrum ♥
by Mochi__x
September 11th, 2013, 1:45pm
Rating: 10.0  / 10.0
As everyone else has already mentioned how great the title story is, I feel that I should stress how much I love one of the other oneshots in this (as it doesn't have it's own page here on MU), Kanjou Spectrum.

Of course the art is totally delicious, the characters are all good looking, manly men that have impeccable fashion sense in my opinion. (I just love men with pierced ears, and all 3 of the main characters do!)

Plus the plot is nice and cute. It is very predictable right from the start, (honestly if you don't automatically know what the supposed "twist" is going to be, then I seriously wonder about you), but I like that. I knew right from the first page that there was going to be a happy and satisfying ending, and of course I wasn't disappointed in the least.

To be honest I think what I liked the most about this, is that despite only having 40-something pages, the romance was perfectly paced. Instead of any of the characters randomly falling in love after being confessed to or even raped (we all know how often that trope is used in the BL realm!),
Spoiler (mouse over to view)
Kugou's feelings gradually developed due to actually spending time with Usui, so he got to see how cute Usui is (and my goodness, he is really cute ^^). And I really enjoyed seeing how Nakaya's presence started to irk Kugou as his jealousy and possessiveness over Usui started to develop too! XD (I'm not sure if I needed to put this as a spoiler, but I thought perhaps some people may be shocked to find out who the main pairing will be. Though like I said earlier I think it's obvious right from the very start...)

I often find oneshots to be very hit-or-miss as there are so few pages to flesh out characters and create enough of an impression on the reader that they'd feel satisfied after reading. Yet I have to say that I think Yoneda-sensei did a remarkable job with this particular oneshot. There were no bitter feelings in this at all, no silly misunderstandings (admittedly Kugou did misunderstand one pretty big thing the whole way through, but that was mostly because Usui had "confirmed" his suspicions), and no love-triangles (hurray!). Though after seeing the very short, but very funny, extra from Nakaya's POV, I feel kinda sorry for the lonely boy XD I'd love to see a continuation based on him finding his own seme! (No matter how I look at him, he just screams "uke" in my opinion ^^)

So while both NightS and Reply are brilliant, I personally prefer Kanjou Spectrum, and I just thought it deserved it's own mention ^__^

I can re-read it over and over and over again without getting bored
by Eternal_rain
July 22nd, 2013, 11:02am
Rating: 10.0  / 10.0
I love all of Yoneda Kou's works but I don't know why I'm especially attracted to this. The relationship between the two characters was developed so wonderfully. They don't have to say much or do much but we can vividly feel the bond between them. Their relationship progresses so naturally and I have to say they are a perfect match for each other. The sequel NightS - another story makes such a nice ending for the story. I wouldn't have been satisfied without it.

Another thing I love about this oneshot is that Yoneda-sensei's unique sense of humor shows the most in this. There are Yoneda-style jokes throughout the story and they kept me entertained.

This is absolutely one of my most favorite yaoi ever!!!

ARRGGGHHHH TOO COOL
by gilg4mesh
January 10th, 2013, 9:26am
Rating: 10.0  / 10.0
That yakuza is so freaking cool when
Spoiler (mouse over to view)
he appears as matori... He's freaking, freaking cool in those hair and suit! AAAGHHH. HE. IS. SO. COOL!!!!!
The story is cool. And that characters is cool, but can be adorable. All the problem is completed, yet making you wanna see the continuation.

Tracing Yoneda Kou's oneshot, gyaaa every oneshot just make me falling in love harder and harder to her works! Story, artwork, anything! Grrrh her works make my chest so... undescribable, even more than when reading Hibi Chouchou.
Was this comment useful?  Yes

So Worth Reading!
by 2old4yaoi
October 15th, 2012, 10:34pm
Rating: 10.0  / 10.0
Please... Someone just license & compile all Yoneda Kou's Yakuza yaoi stories into a book already! She is so good. I love her sophisticated sense of humor - you can see that in the conversations these characters have. Her work is simply elegant & smolderingly hot!
Was this comment useful?  Yes

Enjoyable Times 10
by arouraleona
September 6th, 2012, 5:08am
Rating: 9.0  / 10.0
This was pretty good all around. Interesting story, interesting characters, great art, spicy where it needed to be spicy (though I wouldn't have argued with a bit more spice), and funny! My only problem would be that it was sometimes difficult to understand who was saying what, I would have liked the dialogue bubbles to be more clearly attributed.
Was this comment useful?  Yes