Login to add items to your list, keep track of your progress, and rate series!
Description
1-3) Your Story I Have Known
High-school student Matsumoto Haato has fallen in love with his abusive mother's ex-boyfriend, yakuza Shibusawa, who was nice to him in the past. When he has nowhere left to go he turns to the gruff but kind older man. A three chapter love story that details the changing relationship between the two men over the years.

4) Sauté d'oignon
When two people are together, the sweetness and the spiciness of love are the greatest flavors. High school student Negi and Tama have been together since elementary school, and now Negi... More...
1-3) Your Story I Have Known
High-school student Matsumoto Haato has fallen in love with his abusive mother's ex-boyfriend, yakuza Shibusawa, who was nice to him in the past. When he has nowhere left to go he turns to the gruff but kind older man. A three chapter love story that details the changing relationship between the two men over the years.

4) Sauté d'oignon
When two people are together, the sweetness and the spiciness of love are the greatest flavors. High school student Negi and Tama have been together since elementary school, and now Negi is ready to move their relationship to a new level, but Tama's still unsure...

5) Koe ga Todoku no Nara (If the Voice Reaches)
Shouta is constantly getting in fights, but despite that, he's a nice guy. One day, while saving someone from some bullies, a weirdo samurai guy shows up and tells him he's haunting him. Now Shouta must deal with this constant spiritual companion... and all the emotions that come with him!

6) Kami-sama no Me wo Nusunde
Narasaki still vividly remembers the day in high school when his friend confessed to him, and his heartless response. Years later when he is confessed to by another guy, he's determined to give Wakatsuki the chance he didn't give his friend. But is he seeing the man in front of him, or just reliving the past? Less... 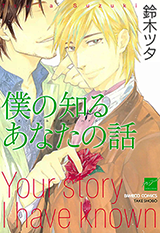 Problem With BL Manga
by black_bunny0524
September 14th, 2018, 6:58am
Rating: 8.0  / 10.0
I always have one problem with bl mangas up until now. Whenever the story starts to reach a high stake, it's suddenly a denouement already, and the wrap-up isn't satisfying at all. It's the same with this, 3 chapters aren't enough, whether it's because of the manga-ka herself or editor (company) who decides so. I wish this story would at least have the entire tankoubon or a span of two tankoubons. Even in the drama cd it feels like you are getting promised of something angst and deep.

I rated it for the cover story only.

So-so
by Twitchit
June 11th, 2014, 2:37pm
Rating: N/A
This is not a style of art that I'm used to (or usually comfortable reading), nor is the type of men the ones I'm familiar with. That being said, at least it wasn't macho bear men - that would have killed it for me! The designation of uke and seme for the title couple surprised me, but I found the general plot pretty interesting. Still, of all the stories in this work, the last one was probably my favorite.
Was this comment useful?  Yes

Good, but a few issues...
by imames
January 25th, 2014, 6:27am
Rating: 8.5  / 10.0
Very cute. The last story was my favorite. The main story is good, I like that it traces a relationship across several years. Parts of it felt a bit rushed. I wish we could have seen Shibusawa's feelings progress from affection to love. I believe most of that happened in the time skip, but since it's the basis for any relationship, it's a necessary component and the story really just glances over it.

This is an excellent volume of manga to be sure, but I hold Tsuta-sensei to a higher standard. I feel that the main story could have been fleshed out just a bit more as far as backstory and characterization are concerned. I had the same issue with the second story. I loved the characters but they didn't have enough time to really make an impact. I wanted to know more about them; also the timeline was confusing for me since it wasn't linear. I had a hard time differentiating what was a flashback and what was happening in the present. The third story I'm not overly fond of, it really just felt like filler. Shouta has potential as a character and is compelling, but a one-shot doesn't have the space to accomodate this kind of story well. And as previously stated, the last story was definitely my favorite of the bunch. Still, this is one of the better yaoi mangas you can find, and Tsuta-sensei's art, as always, is excellent.

....
by MirayAllen
October 1st, 2013, 4:17am
Rating: 7.5  / 10.0
No matter how much I like the art style, these stories are just too shallow. It's confusing, really. I liked the main characters to each story a lot but not one of them left me fully satisfied. Everything plays out so well and easily in the end, there's not even a wink to the readers. Everything feels rushed and uneven. I'd say the first story was the best, perhaps because it was given a little bit more space to flourish. In this case I also enjoyed the twist concerning sexual roles, even though it's not something I accept easily (it depends on the way the artist delivers it, really). But even so, the love was really shallow and I couldn't relate to or care about any character.

Granted: the art is gorgeous though. Had the style been more average and I'd give this work a 6, maybe 6.5.
Was this comment useful?  Yes

I have to say though, I wish that sme of them were a little more hard-core on the visual, but I am also glad that it is not creeping me out with borderline shouta stuff or a load of rape. I would recommend her in general for other beginning yaoi fans!
Was this comment useful?  Yes

promising start, but...
by keyracunan
July 28th, 2011, 1:16pm
Rating: N/A
hmm... I was expecting a bit more angst and twists, but somehow the love get returned a bit too easy. It's started so exciting and promising, but then ended like "eh? that's it?"

and I'm quite a boring person, I prefer the traditional way where the big macho yakuza guy should be... yeah. So that little surprise is a bit turn off for me.
Was this comment useful?  Yes

a must read for any BL fan
by jazzybaby
February 21st, 2010, 10:38pm
Rating: 9.0  / 10.0
hands down, "your story i have known" is one of my favorite works of suzuki tsuta's.
tsuta-sensei's storytelling skills are amazing and her art is really modern and a treat for the eyes.
Spoiler (mouse over to view)
the way the story's played out,
i never expected who the uke really turned out to be.
and i was pleasantly surprised. <33
i actually felt a little connected to the characters soo...
i honestly just wish there was more but it does end on a good note. (:

Tsuta-sensei did it again
by Sakura_Hikizaki
December 19th, 2009, 7:32am
Rating: 9.0  / 10.0
I can't ever get enough of Tsuta-sensei's work. I loved this manga it has to be one of my fave. It was just lovely to see Haato confess to Shibusawa. The last story was just finaly icing. I really liked it, although I'm not usually a fan of the type of story.

If you are a Tsuta sensei fan this is a must read.
Was this comment useful?  Yes

thumbs up
by lylicagalatea
September 24th, 2009, 2:16am
Rating: 8.0  / 10.0
her drawing skills are amazing, her characters can be a bit shocking (positively speaking) and her stories are always weirdly cute.

Give it a shot, it might not be the best manga you've ever read but it's definitely worth you time.


not enough sex scenes, but that might just be me