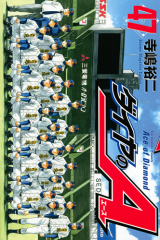 Note: You must be logged in to update information on this page.
Forum Posts Click to view the forum
Ace of Diamond's 1st Part Ends
over 8 years ago
Ace of Diamond Gets Anime This Fall
over 9 years ago
ch40-50, what happens?
over 10 years ago

Humiliated MC ,unhealthy manga
by Terwa
August 24th, 2021, 5:08am
Rating: 1.0  / 10.0
As always with no exception 99% of the sports manga its about humiliate the mc and the rival or foe stronger than the Mc ,and its always about being talented not working hard
Japanese sports manga not healthy, and as a viewer its always get me frustrated and I always think that ,come one, why would anyone keep shut about being stepped on ,its somehow type of bully and you are not committed to go with it cause you love the sport!? anyone wouldn't be passionate and would hate what make them broken or damage ,so basically who just keep with this kind of behaver are the weak who don't have self respect
Ugly and unmotivated manga ,the prize it got doesn't deserve it
Was this comment useful?  Yes

if you like the MC GETTING THE SPOTLIGHT then DON'T READ/WATCH!!!
by conanyam
December 21st, 2018, 7:54pm
Rating: N/A
actually i like the plot and was expecting too much, i'm the type that want the MC to get to the TOP at the end like other sports anime/manga... while reading and watching this in the anime I thought that Sawamura would be the ace in the end or before ending and would be the one to bring the team to winning.... but ugghh... too frustrating,.. wouldn't read it again
but then there's a sequel and he may be getting the spotlight of being the MC there and become the ace... if so then i'll read this manga again and the sequel as one, it will make the story as sawamura's long road to be the ace ^-^

BUT as a team sports manga not caring for the MC it's a good one and i'll give it a 9 rating....

Good but frustrating
by tnwls523
August 16th, 2016, 1:34am
Rating: 8.5  / 10.0
The story is really good, sucking you in from the first few chapters. There are a variety of charcters and each gets some kind of story. The manga isn't just focused on powering up the main character like crazy (unlike Prince of Tennis). I like seeing the other charcters develop but at the end of this act, I can't help but feel frustrated how Sawamura, the main character, keeps getting sidelined! I wouldn't mind so much if thr manga started out with Furuya as the MC but since it started with Sawamura, I keep reading expecting him to finally get some spotlight. If I hadn't read it in one go I'm sure I would've dropped it in the middle out if frustration.
Was this comment useful?  Yes

I read this series after seeing it featured in Koshien's museum. And I really enjoyed it. I liked the fact that it's a team sport. There is competition not just against other schools but among the team.

Besides kaibutsu pitcher Furuya, we see players like Kawakami and how he struggles with those who are naturally better than him. It's very real, playing in a team sports that way. To let the better player out there, waiting for a chance to take over while constantly plagued by a sense of bitterness. Everything revolves around baseball and the team. It's pure sports though, so don't expect out of sports related love troubles, school drama etc. The art is clean and done with a good amount of intensity, especially during crucial points in the game.

And yes. For all the detractors who cant see it, there is definitely a lot of respect, support and rivalry between Furuya and Sawamura. Furuya makes it very clear that he has never looked down upon Sawamura. The ending is a bit open ended (to make way for the sequel) and it's beautifully done.

I'm really glad I picked up the series after watching a match in Koshien this year. If you want a manga with a good, clean sports rivalry and friendship, character growth and no unnecessary drama, read this. There won't be any regrets.
Was this comment useful?  Yes

Great but...
by twistedlogic
May 27th, 2014, 6:47pm
Rating: 8.5  / 10.0
It's a great baseball manga. Well it's not that realistic but you should've known that. I mean it's shounen, you know. The demographic which targets young boys. Not that it's only for young boys but they are the target audience. I don't really have a problem with that though. The development is well-paced yet it kind of feels really slow. LOL. That was confusing. The char development is great. Their opponents are also developed. And often I find myself confused on who to root for. Then there's the MC. Most people complain that the rival, Furuya, always gets the spotlight. IMO that is this manga's strength and weakness. It is unique that MC's development didn't take a volume or two. Heck it's been a whole lot of volumes. I think that is a charm in it's on way. However, it is great to see his potential unleashed every once in a while. It heightens the excitement. But sometimes I feel like the MC is being sidelined. Like when you read the later chapters without reading the first ones, Sawamura would seem like a supporting char. It don't really have any complaints with that. It's just that there's this really thin line between the M and S characters. And distinguishing one from the other is really hard. Nevertheless, it's an amazing manga.
Was this comment useful?  Yes

The Great Standard Baseball Manga
by emkat
March 16th, 2013, 5:28pm
Rating: N/A
This is as pure of a baseball manga as it gets. A main character who has unbounded potential yet is unpolished, a genius rival, mentors, harsh but caring coach, and a supporting cast of team members that contribute in their own unique way. There is no real heartfelt moment outside of baseball, there is no love interest, there is no personal squabbles. Everything they do, every event that happens revolves around baseball.

This is a sports manga probably in its purest form, with all of the surprises and drama stemming from the unique opponents that they face. Sports manga done well. If you don't enjoy sports manga, then stay away from it - you won't get anything else.

For those that read a bit and are complaining.
by klos
January 5th, 2013, 3:49am
Rating: 7.4  / 10.0
In the beginning I also felt that it was childish, somewhat unreal and exaggerated. But as they advance, the main character corrects his form, windup and learns to grip the ball and so on. So it’s not some weird ability and stays that way for the rest of the manga. No, they get really into the form and abilities required to play baseball. As he corrects his form, the bond and the development of the characters occur. Not to say that pitchers with deceptive pitches, form and movement exists. So it’s not unreal if you look at this perspective. Not to mention that the games are not exaggerated, so it is enjoyable and they keep it real.
The expressions and actions are well described and characterize as they go deep in the tournament and it gets better. I’ve already looked at the raw far beyond the tournament, so I can say that with some base. Unfortunately the scans are slow.
Was this comment useful?  Yes

This is one of those great mangas that needed scanlators
by 4050561
July 15th, 2012, 2:53am
Rating: N/A
I've rated this nine cause it needs scanlators lol. Well, this is one of those mangas that you might say it's a cliche, yup they're right but if you think about it, those guys saying as such, they're narrow minded lol. Guys, this is a manga, where everything you might think of might happens or not. If you guys want some realistic or something, you guys simply just go back to your pathetic lives. Anyway, about this manga, it is one of those mangas that will make you wonders what will happen. You can feel the urge of what will Sawamura will do next. An unpredictable pitcher with an unpredictable pitching form. Ooops sorry for the spoiler but this is one of those mangas, that every chapter will make you want more. I hope that this manga will have a anime too like Major.
Was this comment useful?  Yes

Great
by momomilk
September 30th, 2011, 6:55pm
Rating: N/A
I really enjoyed this manga a lot. Some may call it realistic but you know, its a manga and I'm not expecting it to be realistic. The plot is interesting, the characters are interesting and I just find it a really great read. I love that the main character isn't some whiny loser but is happy and isn't so pessimistic and a whiner. Great manga with beautiful art. Worth the read. If you like baseball or sports genre, give this a try! I'd love to see it animated someday like Major and Ookiku Furikabutte

Horrible Characters
by liquidsin
August 22nd, 2011, 12:08am
Rating: N/A
Not a single character feels real in the 36 chapters that I've read so far. Hell, the whole concept of baseball feels just as fake as the characters themselves. You have a pitcher whose only talent is to throw unpredictable pitches and requires a genius catcher to be able to catch them. Add in some random gags that never produce a laugh with a heap of awkward "I'll never give up, we're fighting as a team" and you've got the basis for this series.