Login to add items to your list, keep track of your progress, and rate series!
Description
The Hero has defeated the Demon King, but the Princess he meant to save turned out to be a Prince. NEETdom, here he comes, but a life of relaxation surrounded by animes is a pretty sweet deal.

Unfortunately, he gets caught up in millennia old legends, curses, and a twisted plot involving multiple Kingdoms and many dragons. Through and through, though, he'll follow a path of whimsy, even if that involves him palling it up with "villains".

Suspension Specials/Notices have mini comics about the author 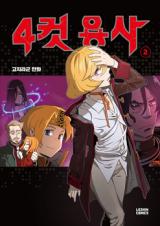 Drop it and read Bobobo-bo Bo-bobo (it is similar and way better)
by Joese
May 17th, 2020, 9:53am
Rating: 1.0  / 10.0
If you like the standard isekai with some game mechanics you might like this since it more or less since it is a parody of that. And it's chapters are just the right length ,so it is an easy to read.

BUT there are tooo many comics/mangas ... with similar tags and higher quality. Googling any random ongoing comic you like plus parody/ 4-koma/ meme will almost certainly be a better find than this.

To me ,(someone that has read lots of comedy manga) ,it just tries to mash up lots of comedy in your typical post-demon king war manga. It uses over and over the same gags, is too predictable with it's twists...It is a complete Buzz-killer when something clearly won't happen and the author explicitly(or not) says it (as if it wasn't obvious enough).

What I hate most is how inconsistent it is when it randomly has any +- powerful character (including the MC) kill loads of people for the laughs or your typical Asian gags /second rate humor ...It didn't even make me laugh or smile. It is a good example of someone using all the tropes in the arsenal wrong.

It is a sloppy attempt on absurd humour.

It is so bad I don't even feel like remembering the story or complaining more.

Updates
by andasideoffries
February 21st, 2020, 8:43pm
Rating: 7.0  / 10.0
Ive noticed this manga hasnt had a rating given by a reviewer since its last been updated. So heres a rated review. The manga is great. I love the story. The less than cuddly protagonist. Theres a lot of funny stuff in there and also alot of action. I think youll enjoy it especially if ur tired of all "The Chosen One" tropes.

However, the author hasnt updated in two years. Probably dead in a ditch from rabid fans waiting a whole 12 months and now hes just been decomposing for the last year (making two years of absence). Cant say I blame them.
Rated lower because of the whole-author is dead in a ditch somewhere with his skull crushed in-thing (why yes, I AM salty about the lack of updates. How did u know?).
Up to you if u want to start a possibly dead ended manga.

(Note: the author is very sick so he needs to rest. But you can still be annoyed even if you feel for him at the same time. I give you permission.)

What a funny story and um
by Fierytia
November 11th, 2019, 7:59am
Rating: N/A
It has one of my fetishes in it so its a plus( its not SM or lolicon)
The comedy is great and the protagonist has a soul
Was this comment useful?  Yes

An Awesome Hidden Gem
by SSJR2
March 21st, 2017, 1:53pm
Rating: 10.0  / 10.0
Wow....just wow. I just randomly checked out this series when i was bored recently and it just blew me away how great it is. I love finding random awesome series like this out of nowhere like that. It was so fun to binge read but sadly i have to wait for udates now lol.
Anyway in terms of the series to describe it i would have to say its just great on all fronts.
-The story: The basic description of "hero that becomes a neet" that other sites usually put down for this doesn't do this series justice. That is just a beginning aspect of the series and it goes well beyond that quickly as the series progresses. Its basically a RPG style world with a lot of bad ass characters who are almost as equally funny too. It may be random at times but its super entertaining to follow nonetheless. Ill get into why more next.
-The Comedy: Probably the best thing about this series (even though there are a lot of great things about it). Many moments have me bursting out laughing as they play with a lot of funny RPG elements and have hilarious references to other series. This series has a lot of parody moments while keeping itself serious at times. This wont be the first time i say this but it reminds me a lot of One Punch Man the way they handle comedy and parodies with actual great action and story.
-The Art and Action: After the comedy this is my second favorite thing about this series. it has great and well drawn action. The action scenes are really great and the art does start out pretty good at first but starts to improve a lot more as time goes on to great levels.
-Characters: The last aspect i wanted to talk about was the characters. There are not only great character designs but there abilities and personalities shine a lot through this series. Most of the lead and supporting characters have a lot of cool moments and abilities while also being really funny at times (like i said before) this has so much great comedy relief its crazy. That may also be a negative to some who want a more serious series but if thats just not for you its not for you. Thats why i mentioned One Punch Man. Its a good popular example that can pretty much give most people who want to read this an idea of how this series will be. Great art, Many hilarious moments, A semi serious story, Awesome action and character designs and yea just a lot of gags and references. Really worth the read.

Funny as hell webtoon, cool action, stylish; it's an unconventional hero's story.
by Swifft
January 25th, 2017, 2:00pm
Rating: N/A
Finally, the English translation is complete and the wait for Season 2 begins! I have so much to say about this series, and so I said a great deal in a ginormous review of it (or I suppose, of its first season). I don't really like webtoons, but ignoring even the webtoon category this is one of the most entertaining series I've ever read. Choice stuff. Review includes a buying guide. Did you know this was physically printed? I didn't!

Great manhwa
by werdninja
January 20th, 2016, 3:26pm
Rating: 10.0  / 10.0
Best harem comedy I've ever read, which says something because I have a lot of experience with the harem in terms of novels and manga/manhua/manhwa, the comedy is hysterical and the Mc is an Otaku and a hero at the same time but he's not useless trash
Was this comment useful?  Yes

An excellent comedy series
by shadowspark2
August 25th, 2015, 6:57pm
Rating: 10.0  / 10.0
This manwha is full of references and gags while also having an interesting storyline which doesn't take itself too seriously. Definitely a read, especially because it's written in little snippits that make it really easy to pick up at any point. Do yourself a favor and give it a shot
Was this comment useful?  Yes