Login to add items to your list, keep track of your progress, and rate series!
Description
The start of high school life. To the girls, that also meant the start of their love lives. For brand new first year student, Takahashi Nanami (Nana for short), it was no different... She happens to end up in the same class as the incredibly popular Yano Motoharu, who rumors say that two thirds of all the girls are guaranteed to fall in love with. But will that hold true for Nana, who says that if she had to choose between like or dislike, she'd say she dislikes him!?

Note: Won the Shogakukan Manga Award for shoujo in 2005. 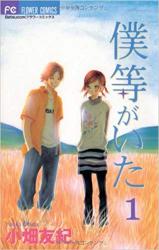 Its depressing ugh yet still bring back memories i cry ;((
by Miachann
December 2nd, 2020, 3:41am
Rating: 9.0  / 10.0
Tbh i like it really, good stories and yet depressing and emotional rollers coaster, but i dont like Yuri character, i mean, Cheated with her sis bf, well her sis and Yuno in the wrong too, tbh i see alot worse but still i dont like her character at all, i dont know why she become so obsessive and wtf she blame all the wrong to Yuno, i mean you take a fuckin part too bxx, you fuckin with your sis bf ಠ_ಠ f.k you yuri!! (lol its feels weird because i really love yuri from yoi)

And i agree with Shimma for Nanami character, i mean we cant choose our heart will fall too, and about her forced Yano forget about Nana is just ugh- like she said 'Yano hate her so i hate nana-san too' even tho she never meet her lol, and Like she asked Yano to said his true feelings to Nana and she said she will listen and then gave example 'you are annoying, i hate your or shut up and die already' isn't it just her true feelings? and really she said that? after said 'i dont want badmouth the death person' and sadly her plan to hear all that thing, and make Yano forget her, become boomerang to her. good think she got character development- and she loves Yano all the time

and this is just my opinion but, i dont think Yano love Nanami in romantic way, idk but it looks like that to me when read the ending, love that Yano have to Nanami its just like family love and he feel scared when he think he lose Nanami, because she is precious to him but just not in that way, like he Love nana for decade and in his hearts always been Nana all along, but he do Caring for nanami, and in the end he accept that all Love Nanami give to him all this time, she gave him strength, and he decided to accept it all, so to me its different from Romantic Love he have to Nana, but maybe in the future he will develop romantic feeling idk(?)

Mixed feelings.
by heichouu
July 23rd, 2020, 11:20am
Rating: 10.0  / 10.0
As I read it, each page was depressing. I can feel the pain of Yano and especially Takahashi. I really feel bad for Takeuchi 🙁( poor boy. I was so stressed reading it to the point I cried because it was really too much to handle, the situation, the burden, and their pain.
Was this comment useful?  Yes

unbelievable
by tearlesereph
October 17th, 2017, 5:20pm
Rating: N/A
This story has the making of something epic since the characters in the manga grow up and experiences various hardships, etc. And a lot of the characters are likable... But at the same time, all their situations are too unbelievable.

The situation between Nana and Yano happened in junior high when they were 13/14. They had such an "adult" relationship it was hard to believe that Yano would have settled for the super innocent and fluffy romance he had with Nana-chan, when they're both now around 16 with raging hormones and all! It would be more believable if all the characters were a bit older and the first events happened in high school and Yano met Nana-chan in college and then from there on.

Secondly, what was up with Yuri? There's really nothing in her history to make her grow into such a twisted person that she would use her sister's death and then her mother's in the way that she did in the manga. She was never bullied as a child. Her whole family loved and cared for her. In school, all people did was call her cold for ignoring them, which she did. Again, no one bullied her. As an adult, even her coworker was super nice to her and actually thought of her as a best friend. Like seriously, no drama whatsoever. Sure, her sister was the prettier one but she was also known to be extremely dumb. I also don't understand her obsession with Yano and the whole Yuri/Yano thing was the hardest to understand and it took over most of the manga. I don't understand her obsession with him for it to last over ten years. I also don't understand why Yano even bothered with her the very first time because he moved on from Nana's death pretty quickly and fell very deeply in love with Nana-chan.

Just. The manga could be so much MORE but wasn't able to grasp it. Like the author tried to make it deeper but stopped and then certain relationships don't seem justified to behave the way they did.

Tbh, I found the first half of it to be pretty irritating because it felt like it was going nowhere. There was too much drama which just kept repeating itself in different, but generally the same forms.

Then there was the second half. I thought it to be an improvement from the first since it seemed to finally be going somewhere. I personally liked it more than the first half, and I guess that's why it didn't turn into something I hate.
Was this comment useful?  Yes

.
by Shimma
July 8th, 2017, 3:52pm
Rating: N/A
I remember really dislinking this manga since chapter one.
The main girl was selfish, self-centered, with zero emphaty towards Yano's feeling. If he doesn't forget his ex, let him be. She also didn't care for Takeuchi.
I don't know what was appealing of Yano.
Lets not talk about the art.
Was this comment useful?  Yes

I Burst A Vein
by Nemurenaiyo
May 19th, 2016, 12:29am
Rating: N/A
Nope. Not my cup of tea. It started off pretty good. The characters were okay and likeable.
Then, as the story progressed, I got pissed off. I hated everyone. Everything was getting vague and it left me anxious and I didn't like how I felt. So I just left it without bothering to finish my read.
Anyway, if you like drama, have a try.
Was this comment useful?  Yes

overrated
by rockerpunk
September 5th, 2015, 3:21pm
Rating: 7.0  / 10.0
had high expectations for this...had it on my list for quite a while and finally got around to it. I've read better...hint of realism in Yano's story, much more than the rest anyway, which was fantastic but that wasn't enough to make up for the entire manga.

Worth the drama, the different emotions and just about a love story can portray.

Yano Motoharu and Takahashi Nanami's relationship was a memorable experience.
Was this comment useful?  Yes

Positive
by WASHinWithWAVES
March 25th, 2014, 12:41am
Rating: N/A
I would recommend this to a reader that enjoys a slow-paced story. The art definitely improved in the later volumes, which I like to see in mangakas works as their skills develop. What I liked about the author's choice to portray the characters was that nobody was truly the villain. By the end of story, I felt sympathetic for everyone. I didn't hate the characters. I felt like little parts of their situations and dilemma were relatable. Aki with an unrequited love, Yamamoto being misunderstood and unable to express her emotions, the sacrificial hero Takeuchi. I loved them all, including Lalami, Yano, and Nanami.

The entire story spans about ten years, and there is a large amount of hopping. Especially around the middle, where the time drastically shifts forward into the future. It didn't bother me that much, but do your best to not let it bother you either.

Again, this is a slow story, and it shifts around among different character's perspective. It reveals each individual's motives through their thoughts, and I really enjoyed that.

If your an avid shoujo manga reader, then I strongly suggest you give this manga a go!
Was this comment useful?  Yes

Lovely
by aiish
January 11th, 2014, 8:34am
Rating: 8.0  / 10.0
It was very nice but in the end, it dragged on way too much. And even though Takahashi is the main character I couldn't bring myself to like her. So once the main protagonist doesn't interest me, the whole story just makes me bored or mad. I VERY much disliked her wispy washy love. Yes it was obvious she loved Tano but she was so insecure in it that made me mad. The only character I liked was the black hair girl that Tano met in Tokyo. I forgot her name haha. But the love was still very sweet, yet draggy.
Was this comment useful?  Yes