Login to add items to your list, keep track of your progress, and rate series!
Description
1. Tenshinchigi (Gods of Heaven and Earth)
The gods of earth, water, fire, wind and thunder gather together every day for their assignments. In between causing storms and rain showers love develops.

2. Fragile but Strong
Mayden, the king from Dumayden and Alexander, the king from Alectoria, are best friends. One day Mayden proposes a marriage between his eldest son and Alexander's only daughter but, unknown to most, the king's daughter is actually a rebellious teenaged boy! What happens when Prince Mayville turns up for the marriage interview and meets beautiful but headstrong Alec instead of ... More...
1. Tenshinchigi (Gods of Heaven and Earth)
The gods of earth, water, fire, wind and thunder gather together every day for their assignments. In between causing storms and rain showers love develops.

2. Fragile but Strong
Mayden, the king from Dumayden and Alexander, the king from Alectoria, are best friends. One day Mayden proposes a marriage between his eldest son and Alexander's only daughter but, unknown to most, the king's daughter is actually a rebellious teenaged boy! What happens when Prince Mayville turns up for the marriage interview and meets beautiful but headstrong Alec instead of the rumoured Black Rose Princess Sandra?

3. Stray Cat Rock
Simple first aid to a wounded stranger is interpreted as something more.

4. A Wanderer's Love
A host who enjoys preying on women finds himself unexpectedly falling for a male florist's beautiful bouquets

5. Love Monster
Returning home drunk from a group date Hayato finds a strange vagabond on his doorstep who turns out to be his Uncle Tooru. Less... 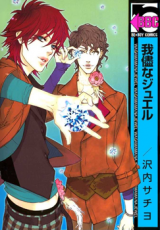 Hm, okay I guess...
by GrapeCherry
December 19th, 2011, 9:56pm
Rating: N/A
Every time a chapter would end I would just get so angry because for one I was so absorbed into it. If each chapter was longer I swear this would have a lot more fans and a lot more support. People like me don't enjoy reading oneshots that have potential plot development. But out of all the oneshots I'd rather have number one repeat itself in another chapter. And I wish four had a little more! But other than that it's still a fantastic read and I would still recommend. If you like oneshots. If you're looking for plot it doesn't exist here.
Was this comment useful?  Yes

Worth a Read
by musingonlife
November 6th, 2009, 4:13pm
Rating: N/A
The art was amazing especially, but the storylines were a bit medicore... the first was a bit too classical, second a little overused in het and 2.3 sort of dragged. 3 was vert short and art a little more lacking than the rest, 4 was interesting a very very pretty though again plotline's not the best I've read in BL. 5 was alright in regards to plot but a little... fast and a few loopholes... also the uncle is uke and says he's always loved the boy but didn't do anything because he was a kid... now the guy's in uni so it isn't shota but really... weird.
They were nice though, the art had lovely experessions and such. Humorous situations and loveable characters. <3
It's worth a read.
Was this comment useful?  Yes

Pretty Art
by brid
February 7th, 2009, 9:20pm
Rating: 6.0  / 10.0
The art is really something in this one. Both people and backgrounds are rendered very nicely, so for that alone, this book of oneshots is worth a look (and the final page of chapter 4 is worth framing). But beyond that, there's nothing particularly notable about this one. I rated it above average for the art, but the stories and characters suffer badly from oneshot-itis. That is, everything happens so quickly in each of the stories that not only do you never really get to know or care much about the characters, but the stories can get a bit confusing because it's all happening so fast.

Take the story with the two princes, for instance. There's a LOT that gets left out, plot-wise: The king's background with the magician is never delved in to, nor why the two kings are so close, nor is the mystery surrounding the hot servant who likes the king (which in a side-note was promised to be explained at another time) ever touched upon. But setting aside the fact that there are loose ends to the plot, the writing of the stories itself is confusing. For example, in the final chapter starring the two princes, they appear to be much older on the first page, then seem to be 14-15 again for the rest of the story, then seem to be older again on the last page. From the dialogue on the last page it seems that the events that happen in the chapter were a flashback, but why couldn't we have been told that from the begining? It's confusing seeing them appearing to be engaged in sex and then all of a sudden become uncomfortable with it. And how much time has passed from the time of the flashback to the present? It's little things like this, having to periodically stop and ask yourself why this or that thing is happening, that make these onsehots, on the whole, not always as successful as they could be. Don't get me wrong, the oneshots aren't terrible; there are plenty of cute moments throughout all the stories that I appreciated, but overall, the stories ren't substantial enough (cute enough, funny enough, or thought-provoking enough) to make you want to reread them when you're done. All in all, I can't recommend this one, but I can't not recommend it either--it's mostly sort of OK. So give it a shot, the art alone makes it worth it. You may like it more than I did.
Was this comment useful?  Yes

...
by thismomentisfate
December 15th, 2008, 8:49am
Rating: 1.0  / 10.0
what a jerk, he claims he doesnt want to hurt his partner because of his sexual urges, and yet he doesnt think that by sleeping with other women (he doesnt though because he gets stopped by his partner) he would hurt his partner. why would he stay with someone that would keep from him the fact that he plans to go to bed with women. instead of wasting his time with prostitutes why didnt he try seducing his partner? if i was the uke i would have given my first time to someone else just to get back at him.