Login to add items to your list, keep track of your progress, and rate series!
Description
Ji-Woo Lee, an author gets reincarnated into her novel as Tara Elias, the 5th daughter of the Elias family. However, the family is supposed to fall soon, and everyone in it will be executed. Ji-Woo insists that she will escape her fate.

"I thought everything was going smoothly."

That is, until she meets the second prince. Prince Kyle Amur. 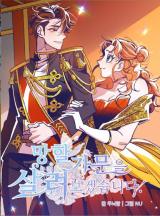 Note: You must be logged in to update information on this page.
Forum Posts Click to view the forum
Name of Novel?
about 1 year ago

Really good, read various chapters before deciding what you think about this..
by Bisis
May 29th, 2022, 8:22pm
Rating: 10.0  / 10.0
I really like this manhwa. The protagonist makes a lot of effort to be able to save her family. Her relationship with her sisters is good, they don't have an unnecessary rivalry, but learn to trust each other. The FL makes mistakes but learns from them. She decides to lose weight and learn how to fight, but when she obtains a reasonable weight she stops since she is not looking to be overly skinny. There is not insta-love. There is more of an interest that grows between them.
Was this comment useful?  Yes

A Realistic Heroine
by DanniWasHere
April 28th, 2022, 6:56am
Rating: N/A
I don't know what story the others are reading, but this one doesn't seem to fat shame like others, such as the one where the FL takes a bath and the fat magically falls away. The FL spends the first season exercising and eating well to lose the weight. At one point she even says she doesn't plan to lose more because she feels good. And at the start she is not healthy. They clearly portray she is in a body that can barely walk up and down stairs.

So please don't think this one is fat shaming. It is one of the few that actually show weight loss as more than a one or two episode arc.

Other than that the plot has a lot of political intrigue and the ML is rather unique. He is arrogant but not a jerk.
Was this comment useful?  Yes

I have no idea why I keep reading this piece of trash
by LordOfTheThunder
August 21st, 2021, 9:42pm
Rating: 3.0  / 10.0
The protagonist is incredibly stupid and arrogant and so is everyone else. This series gets the dubious honor of actually causing me to exclaim aloud in shock at the sheer inanity of some of the lines.

(For example, the protagonist tells the male lead a really uninspired story about some kid since she wants to convey her intent to work with him. His subordinate asks what tf she was on about, so the male lead tells him "This, too, is a way of proving herself. She is showing she has the ability to speak in metaphors, such as this one." )

The "heroine" is lauded as an intelligence network's protege because she does things like... read the news. I'm not even joking. Even worse, everyone is shocked and impressed at her news reading. She then responds to people who make dumb remarks by saying she's the heroine and they're just npcs and everyone will forget them in a chapter or two. (Guess what? I didn't forget them because of how stupidly you responded to them, you piece of trash protagonist.) Unless I'm forgetting something, it is the most appalling, cringe-inducing and infuriating female-lead series I have ever seen.

To its credit, for some reason, I keep reading it although I dropped it a few times in rage at some of the bullsh*t. Her family at least isn't as toxic as some but nothing about it is particularly noteworthy. Certainly not enough to make up for the trash content. The art is okay, though, but the protagonist's expression pisses me off by this point.

The main character is so beautiful and I love her ingenuity, but the unabashed fat shaming is embarrassing and something the author should be ashamed of. I don't need to poorly rehash here why a plot device of the main character loosing weight for the reasons the author describes is terrible, as there are people out there who have explained it more eloquently than I ever could.

I honestly just wanted to write this review to gush about how pretty the main character is at the start of the story, I'm just so upset knowing that the author is not going to allow her to be fat and successful. NU seems to be an awesome artist dragged down by the authors negligence. I would not pay a penny to support this author, and the only reason I read as much as I have is that Manta is subscription based instead of per-chapter prices.
Was this comment useful?  Yes

Slut Shaming and ProAno message
by Spottybelle
December 27th, 2020, 7:56pm
Rating: 3.0  / 10.0
From chapter one we see a girl who calls other girls b*tches and is “not like the other girls.” Her life completely transforms when she rapidly looses an extremely unhealthy amount of weight and that is seen as a good thing. For a manga directed at teenage girls, this is extremely dangerous and promotes anorexia due to idolization of an extremely thin body. The main character sends extremely unhealthy messages to viewers beyond your typical annoying “not like other girls” heroine. The “comedy” tag is frustrating because the jokes are not funny, the series is just making fun of various people through use of trope characters and misogynistic jokes.

I see this sort of thing somewhat frequently in Manhua but I am disappointed to see it in a Manhwa. Also, this goes beyond typical small misogynistic jokes and makes that the entire concept of the story.
Was this comment useful?  Yes

Same as always
by MangaShotgun
December 12th, 2020, 8:40am
Rating: 1.0  / 10.0
Just another one of many stories where a reincarnated rich girl wants to lose weight.
Was this comment useful?  Yes