Login to add items to your list, keep track of your progress, and rate series!
Description
Hina moves back to her old home town only to find that the high school is run by two opposing factions, and students identify themselves based on the color of their school uniforms: Black for the followers of the ostentatious, violent Nishizaki, and white for the followers of the misanthropic, clean-freak Isshiki. And, as if it wasn't complicated enough, there are the "grays," who wear their own clothing, deciding to be their own people. Hina finds herself stuck between the leaders of the two factions, and it seems to be turning violent. 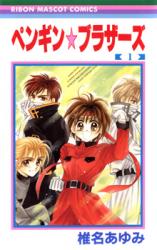 I’m glad it had an open ending
by Rinii
February 26th, 2019, 8:34pm
Rating: N/A
I really liked this manga, and one of the main criticisms is the ending. The end guy isn’t really said concretely but isshiki is hinted greatly to be the main main male lead. However, as much as I love their childhood story, I like Koshiba better, since he’s stayed and helped Hina the most. That’s why I’m kinda glad the author left the ending open so I can pretend in my mind that Koshiba and Hina ended up together XD

I also like how Hina isn’t like most Shuuji manga heroines that blush just from getting into contact with a hot guy. She’s strong and I laughed so much at the time she threw the bugs that were in her desk and picked up the snake that was there too.

Honestly, I would recommend this to people who root for the second male lead most of the time since Koshiba also seemed like he had a chance with the ending the author wrote.

I didn’t mention Nishizaki because I don’t really think this could be labeled as a harem manga. Throughout the series he seems to only tease and fight with Hina, and even the ending shows that he likes someone else(the side story for it was really cute btw)

All in all, I really liked this manga, and I only gave it a 9 since Koshiba, who I rooted for the most, seemed to have second male lead syndrome ^^;; also Isshiki was a brat lol
Was this comment useful?  Yes

The ending.. why you!!!
by hangluu
September 4th, 2015, 11:31pm
Rating: 7.9  / 10.0
This manga was enjoyable. The plot is good, not special or extraordinary, but still good. The lead is happy go lucky, but also strong at the same time. She is not useless and know what to do. The main lead is the stereotypical mysterious male lead who act like a jerk but secretly is a nice guy with a dark past. All in all the manga was fun to read but the ending will kill you. Open ended ending with no confirmation of whether the main lead will be w male lead... she just left and move to france while the male lead wait for her (he hasnt confess yet..). There was really no romantic feeling coming from the main lead haha most romance r from the other male characters. -.1 bc of the ending
Was this comment useful?  Yes

The ending..
by Mi Ho
October 31st, 2011, 11:16pm
Rating: 9.8  / 10.0
I love the female lead,happy-go-lucky-strong-dense type. As for Shou,I like how he's cold for something,he was abused etc. The other characters are perfect too. I was enjoying the manga and when it comes to the ending I was like,"That's it? She's not choosing any guy and take off to France

" That's truly a disappointing ending. gee.. I would give complete 10 if the ending was satisfying.
Was this comment useful?  Yes

The part about the snakes...
by DorkFishOK
August 17th, 2011, 11:37pm
Rating: N/A
Really annoyed me.
Spoiler (mouse over to view)
For some reason, I was getting incredibly irritated with these people who were freaking out over some snakes, when "Snake" would hide snakes everywhere. Honestly, I felt worse for the snakes because all that commotion must have really scared them. Jeez, when Ruu-chan fainted in the bathroom because snakes were thrown on her, I kept waiting for someone to sympathize (maybe even mockingly) with the snakes. But no one said a word. They're living creatures just like anyone else. Throwing water on them in a bathroom might have even been harmful to their health, since snakes are cold blooded and thus require extra heat. The water might have made it difficult for their blood to do it's job. Nobody, not even the mangaka seem to even give one lick of a damn. If "Snake" should be hated for anything, it should be repeated instances of animal abuse >:(
Was this comment useful?  Yes

Brings back memories....
by HanaTenshiHimeko
December 31st, 2010, 7:39am
Rating: 10.0  / 10.0
This manga was one of the first mangas that I read when I was getting into the anime/manga world. The storyline caught my interest right from the beginning and it was fun to see the prodigy try to fix the school up since they were split into two.

I'm one of the few who isn't keen on open endings, but this one is one of the exception.
Was this comment useful?  Yes

disappointed
by Licia Valentine
January 5th, 2010, 10:30pm
Rating: N/A
i'm kind of disappointed with penguin brothers. the entire series focused more on making the school straightened up than romance. Although there were bits of information on hina and isshiki, in the end its not romantic at all.... totally disappointed.
Was this comment useful?  Yes

Everything in this manga is perfect. Both the main and the minor characters are well depicted, especially my favourite protagonist, Hina, who is luckily not a shy, clumsy girl but a brave one with a strong heart and will. What is more, there is a great balance between the drama, love scenes and funny parts. The storyline is also amazing, plus, I loved the refreshing ending. No matter how many times I put this manga on my reading list, I never get bored with it.
Was this comment useful?  Yes

Entertaining
by Lillian
March 11th, 2009, 4:02am
Rating: 8.4  / 10.0
Funnily I read this one quite after Imadoki! and not only the amount of volumes are similar but the setting too. While I love Watase's art I liked the story told and characters presented here much better. Very entertaining. But 5 vols were enough.

><
by hyd_ed
December 17th, 2008, 5:43pm
Rating: N/A
Really cute. It actually has a storyline. Might seem like its for 8 year olds, buts its readable for teens too. Not that lovey. But worthwhile for romance fans.
Was this comment useful?  Yes