Login to add items to your list, keep track of your progress, and rate series!
Description
From Keijo Shoujo Scans:

Haruko Nanase wasn't always the brightest student, but through sheer hard work she successfully entered a prestigious high school and is at the top of her class. While riding the train one day, she witnesses a fight involving a guy wearing the same uniform as her. When the fight is over, he demands that she pay him a fee for watching it but she escapes. The escape is not to last though, because the next day the guy turns out to be in the same class, and worse, his seat is next to hers. 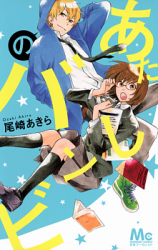 Pretty Good
by anobletiger
July 20th, 2017, 7:38pm
Rating: N/A
It's quite short, with only 4 chapters. But during that time the relationship between the two leads grows in a very natural way. The MC female is cool and reserved, with her own values that she does not sway from easily, unlike other females leads in mangas. The bickering between the two leads is very funny to watch and the daily life is quite cute.

Would have been great if there were more material on them, but the manga was still very good.
Was this comment useful?  Yes

I like it but .... the ending wasn't great
by kitty1826x
August 29th, 2013, 3:25pm
Rating: 8.0  / 10.0
I like a lot of the things in this from the leads personality to how they interacted with each other, but I really felt like I needed more. If I had gotten more, or they made a sequel (where that had a good enough ending) I would have changed the rating from a 8 to 9. A nice read overall, just lacking at the end.
Was this comment useful?  Yes

Very nice, but I'd like a sequel
by MariMS
May 22nd, 2013, 10:39pm
Rating: 8.0  / 10.0
This is your typical shoujo, but the characters are really enjoyable. It would've been great if it had a few more chapters, so the development wouldn't have to be so fast. Nanase is really cool and Hachiya is so funny, his facial expressions are hilarious. The art is also very good and even if it's short, the author was able to conclude it well. But the main reason for my review is this: I can't help but feel that Hachiya knew exactly what they were talking about in the end XD And, finally, I really would like a sequel too...

Damnit!
by dreamit.
March 6th, 2013, 3:13am
Rating: 8.0  / 10.0
Argggggg! So much potential! This could've easily been super popular if only it were longer and had a better ending. I loved both characters, they're so different yet they have such good chemistry together! The story was so good too, it was unique in its own way and I loved where it was going! The ending!!!! The ending could've been so much better! Ugh you know that feelin you get when you read a manga that has the potential to be amazing but it leaves you wanting more instead? Yeah this is one of those. It's so weirdly interesting that you crave for more of it but it ends too fast.
Was this comment useful?  Yes

Aghhh! The Ending-
by TheAppleThatIAte
February 27th, 2013, 2:58am
Rating: N/A
I really like the characters, in fact, it's been a while since I've read shoujo manga where the main female lead is not too girly and weak . She could have been a bit less cold but I guess I like her just the same.

... But I was very frustrated with the ending. It could be better. I like the story so much that it felt like I was deceived with such ending. I wish there's a sequel to this D;
Was this comment useful?  Yes

Potential
by 56lulu
February 21st, 2013, 9:40pm
Rating: 8.0  / 10.0
This is one of those where I reacted with "*THROWS TABLE* OH COME. ON, PEOPLE! Gimme more blast it!" type reaction. Imagine how crushed I was when I rushed here in the hopes of finding a sequel only to find THERE IS ONLY ONE VOLUME TO THIS STORY?!?!?! Argh!!!! T^T So much potential in this story~
Was this comment useful?  Yes

Wish it were longer.
by ImaginaryWishes
January 22nd, 2013, 4:28pm
Rating: 9.0  / 10.0
I liked it. I liked the fact that Nanase works hard to achieve academic success. It's too often that I see supposedly intelligent, "School's Number One" type characters that never have to work to get their ridiculously high marks. She's realistically intelligent. Hachiya as well, even though he is the "bad boy deliquent" male lead, is surprisingly likeable. I mean, he's so... uncomplicated?

The romance wasn't that prominent and I think it's better this way. The story is fun to read despite the lack of melodrama and I breezed through it. My only complaint is that it didn't feel concluded. I would have liked this to be longer. And who knows, maybe it will.
Was this comment useful?  Yes

Cute and quick but nothing special
by zengoats
January 20th, 2013, 6:05pm
Rating: 7.0  / 10.0
Atashi no Banbi is enjoyable, but it has some weaknesses.
The protagonist is cold, so much so that it's almost off-putting. You never really see the main couple interact outside of arguing with one another and studying, and you don't really get to see them interact romantically. Their relationship is a little unrealistic, but it's sweet nonetheless. I usually like short shoujo because shoujo has a tendency to drag on for too long, but Atashi no Banbi was too brief, and I would've liked to see the main couple interact.
It's a good shoujo fix, but it's not special. I would particularly recommend it to people who're into Cold Female x Delinquent Male romance.
Was this comment useful?  Yes

Cute
by ChildofSecrets
January 3rd, 2013, 3:15am
Rating: 9.0  / 10.0
It's a very simple story but done with nice art, humor and characters. It has that kind of 'popular modern shoujo' vibe only it's such a short story and doesn't get the chance to drag on like others. It was a bit predictable and there wasn't much plot-wise but I did like the theme of trying and achieving. The ending didn't scream romance either but I didn't mind that it was left open ended (it makes me want to believe it can be turned into a series later..). But overall it's a nice little something to pass time with.

Really great characters!
by sandyatthebeach1
August 28th, 2012, 5:40pm
Rating: N/A
Nanase isn't your typical shoujo protagonist- she's hard-working (and actually gets somewhere with her hard work) and serious and pretty awesome overall, haha. She's really likeable, too! Hachiya, the... love interest/main guy character? is good, too; he's portrayed like an idiot/delinquent, but he has his cool moments. I really love the characters in this, and I wish it were completely scanlated... and longer. The art is pretty good, too, and the humor is great. I recommend this whole-heartedly!
Was this comment useful?  Yes