Login to add items to your list, keep track of your progress, and rate series!
Description
From Solaris-SVU:
Shingo Chiryuu isn't much different than any other guy except for one thing... He's afraid of girls. Now he finds himself surrounded by girls, including the one whose attack originally instilled the fear in him, as he attempts to cure himself of his gynophobia. 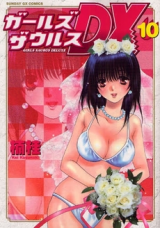 The ending... What?
by Medievalmoon
July 26th, 2012, 7:56pm
Rating: 10.0  / 10.0
What in the wide world was that ending about? (Whew, I think it went through one ear and out the other.)
The story after the first volumes (just like these previous comments stated) was pretty much near stagnant (but entertaining) until the last volume, and then Kusunoki wrapped it up... pretty awkwardly in my honest opinion. Perhaps I think she was being rushed to finish it... I have no clue.
(Don't get me wrong; I thought she did an awesome job with the Bitter Virgin series.)
-The last few chapters themselves were paced completely differently from the rest of the plot.
Now, the story: The premise was funny, however the harem girls' antics slowly got on my nerves a tad.
-Plus, some characters took the fanservice a little too far.
The art was good; I like the mangaka's shoujo-looking style, though I personally don't like seeing bishounen characters....and anything remotely Yaoi/BL. (lol)
The characters were somewhat generic (you know, the clutsy-girl, tomboy, etc.) and then you have real odd-balls like mister Tubbychaser; though I thought I could think of another manga with a character like his, I can only see the characters in Ai Kora as examples .... but that harem is pretty much in a different ballpark compared to this story.

I'm gonna overlook the ending to give it a near-10, just because this manga is unique in its own fashion, but an ending haphazardly crammed together like that.... it kinda killed the story for me.

Just alright
by sirsosss
August 3rd, 2011, 4:11pm
Rating: 8.4  / 10.0
RilleL's review perfectly describe this manga. It lacks plot. The story never moves forward. It's almost as if it was a pure slice of life manga without plot. I like the art, and the comedy was great in the beginning. However, it does get a bit cliche (a lot actually). The plot never get going until the last volume. The ending wasn't that satisfying. It wasn't bad. It didn't feel too rushed either. But it felt incomplete somehow.
The characters were okay. The romance was slow, and very minimal. Regardless, i still somewhat liked it. I guess it's a good way to kill time. Not a bad manga as long as you don't expect too much out of it.

Different.
by Unrequited
April 20th, 2009, 9:18am
Rating: 7.5  / 10.0
The first thing I can say about this manga is that it's definitely unique. I found it moderately funny, and kind of repetitive from Girls Saurus* and some of DX. With the introduction Tsubasa Kōnan in volume 5 I believed the jokes actually got way funnier.

I found that this series is more like a bunch of oneshots or a slice of life manga. It's more for comedy and not really for romantic development. That being said, I hope the ending doesn't get rushed with a forced Haruka one. The way things have been going, an open or harem ending would seem to fit better imo. But at the very least, the his fear of women should be resolved.

So it's a light read, nothing too serious.
Was this comment useful?  Yes

overall it's good.
by aoi_tenshi
August 23rd, 2008, 8:13am
Rating: N/A
I like this manga, I really do (:
The characters are really cool, it's just your typical shounen harem.
But, it's time Shingo noticed his feelings already!
I really want him to end up with Haruka, though I'm sensing this mangas ending is going to be rushed.
Was this comment useful?  Yes

Nice art, nothing else worth noting
by chass
August 15th, 2008, 9:50pm
Rating: N/A
Really, the art is nice. Yeah, it really is, there's not much more to say about the manga. It's more of the same (coming from the original Girls Saurus), just with a few new (terribly annoying, mind you) characters. What's the point of this incredibly stupid glasses girl, she has absolutely no purpose except for falling over and exposing her panties, even for an ecchi manga that's just plain weak.

Absolutely no development in the 7 volumes that I have read and if there is any development it's back to square one because of some <insert random violent retribution for accidental infringement here> over and over.

Somewhat enjoyable read overall that gets very dull as you read through.

mm
by aya_san
June 10th, 2008, 3:31pm
Rating: N/A
I love this manga too.. with the first installment.. but now i find it's too draggy with pointless stories that don't add anything. There's just a whole lot of girls and then something happens to the girls and then the main character comes in, does whatever he does, gets molested and then runs away. I just want to know how it ends already.
Was this comment useful?  Yes

very funny
by tazman0208
February 24th, 2008, 7:11am
Rating: N/A
I enjoy reading this manga just to pass the time. Very funny but like others said it lacks plot progression. I really hope that the manga ends with a good ending that resolves the "fear of women" that the protagonist has and not one of those mangas that doesn't resolve anything and ends the same as it started. (i.e Pretty Face)
Was this comment useful?  Yes

Very perverted. Dragged a bit. Getting better again.
by drunkguy
January 22nd, 2008, 2:25pm
Rating: N/A
I love perverted manga/anime and this one has it in spades. The plot hasn't moved anywhere though since it's prequel. Some of the stories were so so though most gave me good laughs. The artist is great, the fan service is ample and the humor is ever present.
Was this comment useful?  Yes

harem with a twist
by ssuasw
November 25th, 2007, 9:20am
Rating: 7.0  / 10.0
continuation to girls saurus , not much difference from orginal , funny at first but jokes get repetetive
Was this comment useful?  Yes

Yeah...
by peanutss777
November 9th, 2007, 1:08pm
Rating: 9.0  / 10.0
I'll admit at first I didn't care much for the series because the art doesn't compliment the humor well because all the expressions are cliche and uninteresting. I warmed up to it later though. Why? Because the humor is very well done in an 'over the top, we'll just run our characters through the mud for the sake of humor' kind of way. The story itself is entertaining and doesn't need plot progression to be enjoyable. It may not be the be-all, end-all of manga, but it'll help you kill some time (and isn't that what ALL manga is really about?).