Login to add items to your list, keep track of your progress, and rate series!
Description
Battle angels, Lucifer, demons, and holy wars: a nephilim by the name of John is abruptly thrown into this world one day when Michael, a battle angel, comes crashing into the room he is in. 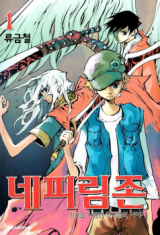 Mediocre
by PZcolo
August 22nd, 2017, 9:32am
Rating: 5.0  / 10.0
Generic plot, horrible art and chars are rather boring. The only positive thing for me were the different relationships but even that wasn't particularly original and, except for Mickey's, they too felt shallow.
Was this comment useful?  Yes

Fantastic!
by tnwls523
March 23rd, 2013, 12:14am
Rating: 9.0  / 10.0
I read Nephilim because I absolutely loved ARES. I liked it just as much, if not more than ARES. I'm glad there wasn't as many long~ action scenes (which look way awesome by the way) in Nephilim. This one is more emotional and deep. I really liked how John matured, especially because he was so annoyingly weak hearted at first, which is to be expected in reality but it just frustrated me. It's such a shame that Nephilim had to be discontinued. There are so many open questions! I can tell that the author was about to get into the big story, THE STORY when all of sudden he had to cut his story short. :'( I want more of Nephilim!!! If I could, I'd pay him to finish drawing everything he was going to draw for Nephilim.
Was this comment useful?  Yes

A action fan's delight
by markdarkangel
July 10th, 2010, 9:12pm
Rating: 8.0  / 10.0
This is one of the series that deserves a good ending instead of that open ending, really sad it was not popular in Korea because i would love to see more.

Seriously can't get enough of the action in this series and all those those great characters. However, there are quiet a few cliches that are used but i wasn't bothered too much by it. I wish i could recommend this but the series has a open ending so you would be sad when it's over like myself.
Was this comment useful?  Yes

ARGH!!!
by Daxisheart
May 27th, 2010, 9:17pm
Rating: N/A
It sucks that this series wasn't all that popular during its serialization. It had a halfway open ending- there were a variety of unresolved things, although you could technically say many of those were resolved. Lots of things could have been explained more in-depth and detail, because, blantantly, things were missing. A sequel would do this series very, very well, and character development needed so much more, honestly.

Amazing action, awesome pacing, and a art style that's likeable. Surprised expressions could use some work, but that's it. Otherwise, awesome series that needs a sequel.
Was this comment useful?  Yes

atmosphere of the manga
by artikk
September 7th, 2009, 10:00am
Rating: N/A
The same type of manga as ares, meaning the atmosphere, also the drawing and fight style. I really like the main character. He's not too hopelessly naive and not too jaded although his values ar ea little screwed up. He fought an demon in self defense but didn't kill it to prevent further attack?
Was this comment useful?  Yes

Promising manga, will have to see how it develops
by a_v
January 2nd, 2009, 4:29pm
Rating: N/A
Based off just the first ep, this manga is your standard "little punching bag" gets some power, then new responsibilities. The protagonist is a slave who loves his "master" (A princess) but is set to be killed because of his attachment to the princess. Enter a reason for him to suddenly have power, and so our story begins.
Was this comment useful?  Yes