Note: Won the 2005 Shogakukan Manga Award for the seinen/general category along with A Spirit of the Sun. Less... 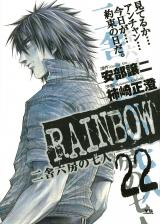 Makes me sad... :(
by Chibiheaven
February 22nd, 2014, 12:20am
Rating: N/A
I really really like this story a lot, it honestly made me quite sad. Just some of the things were too much for me, and I have been unable to continue reading just because I'm afraid of what nightmares may befall the poor boys

Dropped
by bossmama
April 20th, 2013, 10:48am
Rating: 6.0  / 10.0
I was confused and disappointed at first. I mean, this manga was kinda hardcore to the max, right? But somehow I never got any sense of 'maturity' from it. Then I realized that it's because the author executed and dealt with those hardcore stuffs in a childish, forced way. The principles were naive, nothing was thought-provoking, the dialogues were cheesy. And all the friendship thing. Too mushy. Imagine Fairy-Tail-kind-of friendship in a dark seinen universe. It would be unrealistic in a very annoying way and totally out of place.

Then the characters. The premise was pretty good; children that committed crimes at postwar era. It could explore any deeper, or anywhere, but children that accused for the crimes that either they didn't do, forced/manipulated/tricked to do, or did for a noble reason. I couldn't help but felt like the mangaka really loved his characters and he wanted us to love them in a way he loved them. Like I was forced to shout 'cool!' a la young boys' reaction to digimon's transformation. Now that's not a good start for character development. Not to mention they are preachy. Actually the whole manga reek of 'in-your-face' preaches; no room for discussion. And the villains were just plain evil. They act like pawns that only moves and breaths to make our main character suffer. How about the deep, dark, fascinating grey area of human nature? Nay.

Lastly the art. The way the author draw emotional scenes was a bit... over the top? It bothered me. I don't want to be told THAT BOLDLY that it was the time to feel sad or emotional.

I'm dropping this. Five for the idea, one for the art.

Hate Shamo
by Hell_Clues
June 12th, 2011, 11:37pm
Rating: 9.0  / 10.0
What kind of recommendation is that?! It's closer to Ashita no Joe but even harder. These aren't stories of psychos out to get theirs. This is about kids that find themselves in difficult positions they had no choice in. And then growing up from there.

Everyone's given it a good recommendation, and I will too. I haven't yet found the words to express whats so good about it. Guess everything just adds up. Try it.
Was this comment useful?  Yes

Love it
by j3girl
June 9th, 2011, 3:51pm
Rating: 10.0  / 10.0
Man I LOVE this manga/anime! It's one of the best for sure. Very tragic but touching (in a way) series. It's about the strong of power of friendship; yea very corny sounding but that's really the central idea and its extremely well portrayed! The plot and themes are pretty heavy so this is NOT a series you want to read if you want a super cute warm hearted story. It's VERY depressing but one of the best mangas I've ever read! DEFINITLY read this manga! (ps the anime is pretty good too!)
Was this comment useful?  Yes

Very good.
by Kyo_Takasuki
April 24th, 2010, 8:02pm
Rating: 10.0  / 10.0
I didn't know much about the author or artist. It's interesting to know about that. I just started reading the manga since I've just started watching he anime that was released this month and I'm already at volume 20. This has to be the best seinen I've ever read. It touched me and it has to be one of the best stories I've read this year.

Mmmmyea!
by Feri
August 16th, 2006, 6:36am
Rating: N/A
Only read the first chapter(as thats all thats released atm), but i really love what i read. Just like the first few volumes of Shamo it's some depressing ****^^ Can't wait for the next release =))~

[edit by mod,edited for language]
Was this comment useful?  Yes