Login to add items to your list, keep track of your progress, and rate series!
Description
The one-year-younger cry-baby and childhood friend, Kanade, suddenly took Meguru’s first kiss! Though he's grown taller a bit recently, and the girls made a big fuss and called him “the piano prince”, I will not be tricked. He’s a pervert who steals another guy’s lips! With additional pages, the perfect version is now on sale. ♥

The first chapter was originally released as chapter 4 in volume 2 of Not Ready!? Sensei. 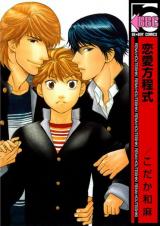 Kodaka does it again.
by LikaLaruku
February 23rd, 2014, 3:17am
Rating: N/A
I can always expect quality storytelling & character development from The Great Kazuma Kodaka.

This made me realize just how rare it is to have a love triangle where it could really go either way instead of knowing right off the bat whom is going to end up with whom at the end. (Well, it's obvious by chapter 7, but there's only 12 chapters) Our cute indecisive little protagonist finds himself unable to chose between three possible love interests. If the 3ed hadn't been a girl, then this would have been a gay harem. There's irony in that he seeks advice on love from the very guy whom rejected his father.

This is more of a spin-off than a sequel, as it revisits one relationship set in Kusatta Kyoushi no Houteishiki a few times. Kouji, Masayoshi & Masami are still identifiable despite their new hairstyles & glasses, but Arisawa & Tooru...You have to be TOLD it's them. There are 3 other people who look like Arisawa in different stages of his life; Hagiwara, Konomi, & Kanon.

The faces aren't exactly Dr. Ten levels of expressive, but you can really tell what the characters are thinking by the looks on their faces, especially in chapter 5.

More!
by blueseeker
October 15th, 2011, 4:04pm
Rating: 9.0  / 10.0
That was extremely cute, i hope sensei can write about them soon! I had to keep reminding myself that they were both in junior high, so the drama they experience is realistic....just my adult mind who has a hard time reading about it.LOL

Update: So adorable even years later! Noticed a 3rd volume in the amazon site, can't wait! Please someone translate it!

Megu starts out indecisive and a bit bratty, but he really does some growing up. I loved watching him mature and realize his faults and which ones he needed to change. He is only a middle schooler. I'd love to see more on them when they're in high school (and beyond!).

I loved all the characters and all the couples! And I was thrilled they treated being gay as just another thing and not some earth-shattering event. That way I could focus on my lovely boys.

The boys actually act a litte more normal in this than in some other manga; the ukes (or, in some cases the future ukes) aren't terrified of sex or pretend they don't want it (which is super creepy and uncomfortable), and they actually initiate romance, like kissing their boyfriends. That shouldn't be something unique to the world of BL, but it is (sadly...).

It's a great story! I'd highly recommend it!

My only complaint is that there isn't a sequel.

Gorgeous!
by Poemi
March 29th, 2009, 3:28pm
Rating: 8.0  / 10.0
Megu was not my favorite character, he was way too indecisive. And I would've liked to see a bit more cameos from the Kusatta story. Otherwise, great stuff!!
Was this comment useful?  Yes

TOO DAMN CUTE!!!!
by LadyAOI
December 13th, 2008, 9:12am
Rating: 10.0  / 10.0
Kazuma Kadaka mangas are awesome not just the art which is one of the best imo but the story lines are oh so good and very funny. When you read any of her works you will not be let down this one is NO exception, whether it's hard or lite yaoi she definitely knows what she's doing! Check this one out!!!
Was this comment useful?  Yes