Login to add items to your list, keep track of your progress, and rate series!
Description
On the school rooftop rumored to be haunted by the ghosts of twins, Shuji Yashiro meets Roku Ichinose, a popular boy Shuji always thought of as belonging to a completely different social world. Unable to take his eyes off Roku’s face, Shuji takes his picture on impulse. The following day, while organizing old photos in the clubroom, Shuji finds a shocking photograph that unexpectedly brings his world a little closer to Ichinose's... 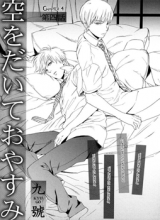 I get why the mangaka dropped this series
by OmNom
July 23rd, 2019, 2:10am
Rating: N/A
There were definitely pacing issues, it was going on a tangent for too long, and ultimately it's hard to get it back on track and give every single character a satisfactory ending when the story had been pushed so far in that direction. Having said that, Kyuugou's portrayal of a hopeless, destructive forbidden love that brings one to the point of insanity was absolutely heartbreaking and powerful; you can feel all the raw emotions of pain and guilt eating away the twins as they both slowly descended into their personal hell. Neither of them was at fault, it was just a tragic story all around and there really was nothing that could save them. Which is why it's impossible to continue expanding it without changing the manga's tone and leading it into a completely different direction, and sensei probably didn't want that and for good reasons.
I personally thought she did an excellent job dissecting Kei's psychologies, how he was driven to despair little by little, and why he resorted to his actions as a coping mechanism to the pain. He's a complex character but I feel like I could understand and even sympathise with him, which is entirely thanks to the mangaka's execution. She's without a doubt a very talented manga writer and artist, just needs better planning next time to give us a finished story haha.
Was this comment useful?  Yes

Meh
by sarin68
June 26th, 2015, 9:50pm
Rating: 5.0  / 10.0
I'm not a big fan of tragic pasts or anything but I can handle them if they're done well. I don't think this one was done well. Yeah I got sad, but when most of the manga is a flashback I lose interest. The previous chapters didn't even make it seem like the twin was the main character, so suddenly switching to a flash back that was not only from his POV but his dead brother's as well? Ugh.
Lengthy flashback aside, it was written well and had good art. I believed the love between the brothers when I don't normally believe authors' portrayals of twins (as a twin myself it's annoying to see them done wrong). I liked who I still believe the main character is (the 4-eyes) and believed his motivation to know more about the twin even though it was almost glossed over.
I hope the mangaka continues and improves the story. I'd give it a 7 for what can potentially be a great manga, but as it is now it only gets a 5.

(Does anyone know if there are only 9 chapters of it or if there are any more chapters that are just unscanlated?)
Was this comment useful?  Yes

Freaken love this
by aiish
June 4th, 2014, 2:02am
Rating: 8.5  / 10.0
This manga is tragically beautiful. The pain and suffering of Kei and Roku is so real, so much ANGST! I find Kei's character to be sooo uke-sexy! I got to say he's my fav character. I'm so impatient to see what's going to happen and what really happened. I feel like there is a lot more to the story. I just hope the author doesn't drop this manga or I'll cry tears of blood.
Was this comment useful?  Yes

...
by MirayAllen
May 13th, 2013, 4:42pm
Rating: 9.5  / 10.0
This is hauntingly disturbing, painfully beautiful, severely unhealthy, on the verge of insanity. I absolutely adore it. Let me tell you something, I'm reading this in the most beautiful place on earth and I'm feeling so anxious, so troubled, nearly suffocating, you wouldn't believe.

In the beginning it all sounded quite ordinary: nerdy, sweet, ordinary-looking kid meets mysterious school hottie on the rooftop with whom he shares an apparent sense of loss: no heart-pounding. But ever since Kei broke into the picture, I've been in a complete roller coaster. As a reader, a spectator, I don't think I've ever shared these many emotions with the characters. I mean, without spoiling anything, I went so far as to feel disgust for Kei, out of empathy with Roku. And yet, I feel such a myriad of feelings for Kei sometimes I can hardly stand Roku for his "obliviousness", or something...

It's been quite a journey. Future readers, try to bear the very beginning - I know it seems to drag - because it is so worthy. I can't wait for further updates.

SIMPLY AMAZING
by lololo008
February 11th, 2013, 8:50am
Rating: N/A
The whole story was beautiful. It's rare to see such amazing plot in yaoi. This is the 1st time i want the main character in a manga to die, cuz i think only death can bring him peace, the pain is just too much for him to endure. This is definitely one of my favarite yaoi<3
Was this comment useful?  Yes

I read it all in one go and it managed to tear me up. The dialogue, the panles, the expression are all done remarkably well! It's like a high shcool version of Saezuru, with twins.
Was this comment useful?  Yes

Oh.
by vietangelix
January 28th, 2013, 12:22am
Rating: 10.0  / 10.0
This manga makes me feel terribly sad but I can't stop reading it. It shows that wanting something you can't have is heartbreaking and being rejected does hurt. A lot. Hopefully, he'll be able to move on as the story progresses and find some joy in life. As for me--it's time to read a happy story.

It's so dark
by Tentacle
November 5th, 2012, 2:14pm
Rating: N/A
Usually I can't stand this kind of dark and twister storyline but I can't stop reading now. I have to know how it will end! I just hope that someone will find some kind of happiness. If not.. well then I'm screwed.
Was this comment useful?  Yes