Login to add items to your list, keep track of your progress, and rate series!
Description
From Kodansha:

Genjo is a Buddhist priest in the city of Shangri-La, which is being ravaged by yokai spirits that have fallen out of balance with the natural order. His superiors send him on a journey far to the west to discover why this is happening and how to stop it. His companions are three yokai with human souls. But this is no day trip—the four will encounter many discoveries and horrors on the way, and on the road, Genjo will wonder … can he really trust his supernatural companions?

Having been assigned by the human elders the mission of stopping a mystical plague tha... More...
From Kodansha:

Genjo is a Buddhist priest in the city of Shangri-La, which is being ravaged by yokai spirits that have fallen out of balance with the natural order. His superiors send him on a journey far to the west to discover why this is happening and how to stop it. His companions are three yokai with human souls. But this is no day trip—the four will encounter many discoveries and horrors on the way, and on the road, Genjo will wonder … can he really trust his supernatural companions?

Having been assigned by the human elders the mission of stopping a mystical plague that has afflicted the Youkai with madness, Genjyo Sanzo assembles his team of Youkai warriors, desperately hoping that the disease will not affect them. He sets up qualifying tests that will help him determine the loyalty and worth of Cho Hakkai, Son Goku and Sha Gojyo. The team then journeys west to rid the land of madness. Less... 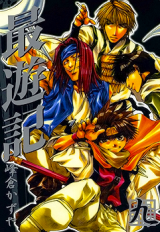 Note: You must be logged in to update information on this page.
Forum Posts Click to view the forum
Saiyuki Creator Kazuya Minekura Returns from Surgery
over 11 years ago

About the art of the series.
by likalaruku1
May 4th, 2017, 4:13pm
Rating: N/A
I have to say, for the overall series, I don't think I've ever seen such a magnificent progression of art. Comparing the first chapter of Gensoumaden to the most recent chapter of Ibun or ReBlast is like comparing a child's drawing on the fridge to a painting in the Louvre. A lot of mangaka will outright change their art style completely or sometimes get progressively worse due to time constraints or health issues. Well, Minekura did have health issues (she had a hysterectomy AND had to get prosthetics after half the bones in her face were removed to get at a tumor. Poor sensei! T_T) & still every panel of what she draws now is like a f***ing masterpiece. So good you get distracted from the story itself.
Was this comment useful?  Yes

stylish
by whitespade
October 4th, 2012, 6:03am
Rating: 8.5  / 10.0
i think its the stylish atmosphere that brought me reading this. the cocky bishies, the cool fights, the arrogant words - overall leave a positive impression. though the art is not the best, the part that matters (ie sanzo's hair) look great so it can be forgiven.
theres not much known even after 9 volumes, but there are sequels, so i guess everything will be answered in due course.
Was this comment useful?  Yes

but among Saiyuki Ibun, Gaiden, Saiyuki Gensomaden(this one) and Reload, the Gaiden, which is the prequel that sensei draw later, is the best ever!.
So i suggest you read follow the sequence: Gensomaden Saiyuki(this one), Reload, Ibun, and Gaiden

Fantastic
by Aniram
August 5th, 2010, 9:21pm
Rating: 10.0  / 10.0
This was the manga I started off with. I read up to volume 8 of reload in two days because I just couldn’t put it down. I love everything about it. The dynamic between the characters is great and I enjoy the continual teasing between them. The artwork is great and improves and becomes a lot more consistent as the series develops. I love how this series combines plot, character development, humour and action. The story and characters have depth but it doesn’t take itself too seriously with things like the addition of modern technologies (jeeps and credit cards) adding to the charm.

I have re-read it now so many times and I still can’t get enough of it. I can’t recommend it enough.

hmmm
by TaoPaiPai
February 13th, 2010, 12:30pm
Rating: 2.0  / 10.0
to be fair calstine
the journey to the west saga
is just as boring
go to a new location
priest get kidnapped
monkey save him after visiting 2-50gods and a couple of budhas
repeat
repeat
repeat
however i totaly agree
this is very boring and it is very strange too me how this became so popular
long anime tv shows and even a new ongoing manga
Was this comment useful?  Yes

A wonderful manga.
by Nuwanda
November 27th, 2009, 12:16pm
Rating: 10.0  / 10.0
I love this series. I find the characters wonderful...their personalities play well off each other. The story of "Journey to the West" has been retold to many times in so many ways, yet it is still interesting here. The dialogue is witty, and despite their extended trip, it never gets boring. The little "sidestories" are particularly funny (they get sidetracked quite often). All in all, this is probably my favorite manga.
Was this comment useful?  Yes

shoujo
by taclipoka
November 19th, 2009, 4:32pm
Rating: N/A
I strained as far as second volume and it is still as boring. Definitely shoujo. In graphics as well as in dialogue. More gorish then average prince&princess, but still hard to read.
Was this comment useful?  Yes

Loved it !
by aishiteximasu
June 28th, 2009, 3:13pm
Rating: 10.0  / 10.0
I absolutely loved this series. I'm not sure why everyone thinks otherwise. There's so many things that hold so much meaning and depth. I love how it takes the simplest concepts and having it represent an even deeper meaning. It's so epic, hahah.. The fact that it didn't even need much romance to be so good says it all for me. (because i usually am drawn to romance, this is one of the first pure action series that actually stick to me)

All and all, I would definitely rate it 10. The overall struggle for the meaning of life and their own existence, individual problems from the past, and overcoming in the end.. pretty much sums up this amazing series. Ahh, there's so much to this series I can't really think to say right now lol. I loved it !
Was this comment useful?  Yes

Disappointed
by gorillaman21
May 8th, 2009, 11:59pm
Rating: 3.0  / 10.0
To be honest, I found it tedious and boring, which is really disappointing considering how much I enjoyed Saiyuki Gaiden and that I actually enjoyed the anime of Gensomaden Saiyuki which I watched way back when. I was really looking forward to Saiyuki the manga.

The progress of how ridiculously weak Kougaiji became in the very second fight, after he had been so overwhelmingly powerful in the first fight also turned me off, as it just didn't make any sense. And of course all those nonsensical moments involving Sanzo becoming incredibly resilient or powerful (e.g. when he is poisoned in the desert and can still move, despite the disbelief of the professional medic on the team, Hakkai; and how he can actually hit/fight Goku in his true form when all the other team members as well as Kougaiji and Dokugakuji are easily floored despite being the least competent hand-to-hand fighter on the team etc)
Was this comment useful?  Yes

Not very impressed...
by VampireBanana
May 4th, 2008, 12:07pm
Rating: N/A
Hmmm, it was a pretty boring retelling of the Chinese classic "Journey to the West" and the characters weren't very interesting at all. In comparison to the original work, much of the psychological impact and other aspects like character depth, etc. were lost during the adaption. As a result, what could have been an impressive title was turned into an almost typical shounen series.