Login to add items to your list, keep track of your progress, and rate series!
Description
Usagi Tsukino is a normal girl until she meets up with Luna a talking cat who tells her that she is Sailor Moon. As Sailor Moon Usagi must fight evils and enforce justice in the name of the Moon and the mysterious Moon Princess. She meets other girls destined to be Sailor Senshi (Sailor Scouts) and together they fight the forces of evil.

Note: Naoko Takeuchi released a re-illustrated version starting in 2003 after she had dropped Love Witch. This new edition had new cover art and title logo as well as slight corrections to dialogue and the artwork.
Won the Kodansha Manga Award for shōjo in ... More...
Usagi Tsukino is a normal girl until she meets up with Luna a talking cat who tells her that she is Sailor Moon. As Sailor Moon Usagi must fight evils and enforce justice in the name of the Moon and the mysterious Moon Princess. She meets other girls destined to be Sailor Senshi (Sailor Scouts) and together they fight the forces of evil.

Note: Naoko Takeuchi released a re-illustrated version starting in 2003 after she had dropped Love Witch. This new edition had new cover art and title logo as well as slight corrections to dialogue and the artwork.
Won the Kodansha Manga Award for shōjo in 1993. Less... 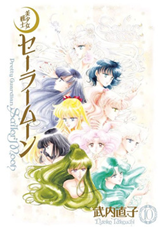 Note: You must be logged in to update information on this page.
Forum Posts Click to view the forum
Sailor Moon Gets New Anime in Summer 2013
over 7 years ago
Sailor Moon Returning to the US!
over 10 years ago

What can I say...
by Utsukushii Yume
May 3rd, 2020, 9:50am
Rating: 7.5  / 10.0
Back in the day Sailor Moon was one of the first manga I was able to get my hands on in my country, and even then I could only get some of it in my native language, I had to buy the rest in Japanese. Back then I really did enjoy it, and in a world where manga was a rare and shameful taboo, you can bet it made an impact on me as it helped me to find other manga much worst, and much better.

With that said, while I have owned the manga for years, I never really had an urge to reread it, and it didn't have any moments in it that made me want to look back at it like some other manga do. While i do tell people about sailor moon, I have never recommend someone to read it.

I give it a 7 for nostalgia reasons, but truthfully I found it to be ok, the events happen like a laundry list and less like a flowing story, so I find it hard to reread. But it holds a special place in my heart like a terrible first love.

It's pretty funny
by jptranslator_girl
January 17th, 2014, 7:10am
Rating: 8.5  / 10.0
My first manga series was actually Hareluya II Boy, and I was like 7 when I started sneaking copies home (lived in Japan for the better part of my life), so I didn't start out on the girlie end of the spectrum either. I, too, was a huge tomboy and hated pretty much everything that was even remotely girlie. But I did read Sailor Moon as one of my best friends at the time--who was a boy, believe it or not--had talked me into reading it. For those of you who don't know this, I just want to state that there are some rather HUGE DIFFERENCES in the manga and the anime:

Spoiler (mouse over to view)
--Rei's not a huge bitch
--Usagi is not as airheaded in the manga. She's actually pretty strong.
--The manga gets straight to the point and doesn't have many fillers.
--The bad guys aren't as dorky as they are in the anime
--Mamoru isn't a pedo in the manga (LOL), and he's actually quite blatant in his feelings for Usagi
--Usagi doesn't get saved by Tuxedo Mask
--Bad guys actually bite it in the manga, and that's that

So even if you didn't like the Sailor Moon anime, then maybe give a chapter or two of the manga a try. The manga moves at a much faster pace than the anime, so that may or may not be a good thing s to some (I personally love that), and Usagi isn't made out to be a dimwitted wuss like she is in the anime. Actually, I didn't really like much of the anime series save for a few episodes.

But yeah...huge differences between the two.

First Anime.
by P_O_C_K_Y
May 29th, 2013, 1:13pm
Rating: 10.0  / 10.0
Didn't read the manga until late primary school (around 6th grade), but I do remember running home after reception class to watch this anime on TV (all 200 episodes on VHS later on because the UK didn't have all the seasonsTT_TT). Oh looking back on it now you can criticize the voice acting or how the anime is not as good as the manga, well excuse me, I like to preserve those amazing memories of dressing in my SailorMoon Hallows costume, with my stuffed Luna doll and my collection of the Sailor Moon Barbies (ahem, ahem full collection). I was a pretty top first year:]

Anywho, back to the manga. Like I said I didn't read it until late primary school which left my mind quite foggy on how well the two coincided, but as far as I can tell they follow each other well. Both are beautifully romantic, action-packed, suspenseful, tragic?, and brilliantly executed. Loved it always have and always will.

Where's your childhood? Haven't read or watched yet? Go watch it now!

First manga
by ivypaw1
December 2nd, 2012, 11:08pm
Rating: 10.0  / 10.0
This is my very very first manga I have ever read. It will also be the very best manga! I can still remember the storyline although it has been 5 years that I have completed a manga. Whee... When I was young, it was the best anime I have ever watch.. Forever the first and the best
Was this comment useful?  Yes

Classic shoujo / Still the best
by cheesiediva
December 21st, 2011, 8:09pm
Rating: 10.0  / 10.0
This is an unabashedly girl-power read. But hey, that's the whole point! This series began in the early 1990s as a girl counterpoint to the male-centric entertainment at the time (think Power Rangers or Ninja Turtles). Although Sailor Moon was my first introduction to manga, it still rates at the top of my list. So then, why does it still seem so fresh after all these years?

Although written with a young teenage audience in mind, Sailor Moon is surprisingly deep. Takeuchi-sensei incorporated astrology, Greek mythology, and complex symbolism to create the backdrop for her school-girl champions of love and justice. This manga's art is cute and girly, but the story is rich in detail and sometimes quite dark. Each character is well-developed and each personality is distinct (with each sailor senshi corresponding to the different signs of the Western zodiac). Everyone in Sailor Moon has believable flaws and strengths (villain and hero alike), so that you become invested in what happens in the plot.

Of course, the romance between Sailor Moon and Tuxedo Mask is worth noting. It is sweet and romantic without ever becoming explicit. (Again, this was written for a young audience, but that doesn't mean a chastely depicted romance can't be enjoyable! In my opinion it's nice not to have the explicit smut that seems to pervade shoujo these days...)

The conclusion is a little rushed but oh-so-satisfying. I think, if you come in knowing what kind of genre you're in for, you'll come away with a special place in your heart for this classic series, as I do.

miss it!
by femalecorpse
August 28th, 2010, 4:28am
Rating: 9.0  / 10.0
miss this manga very much. maybe this is the first manga and anime i've ever watched. i can't forget how me and my friends were crazy about sailormoon stuff.
the story is good if compared with the other manga with same genre. read this and you'll never regret
Was this comment useful?  Yes

It was the first
by mmiiaa
July 16th, 2010, 6:43pm
Rating: N/A
Ok, so like anyone who was growing up/living in the 90s, you know the Sailor Moon series. Everyone loved watching it on Cartoon Network and it was probably some people's first exposure to anime. It certainly was mine and I fell in love!! Although the dub wasn't too great and doesn't do the manga justice, it was pretty good.
Ok, now onto the actual manga. (I doubt anyone is going to be reading Sailor Moon now though..You should!) The manga is SO much different than the anime. The characters are more mature, Darien/Mamoru actually has a use other than throwing roses and swishing a cape, and the art is just gorgeous! I love Naoko's full color works (look up her artbooks and original cover art!), they are just wonderful. I love the watercolors and different techniques. Also, for a early 90s manga, I find her art is pretty darn decent compared to some other works then like BB Fish, Baby and Me, and other such 90s art..Anyways!
The story has the same arcs as the anime, except the useless filler and Monster of the Day crap is cut out. The romance between Serena/Usagi and Mamoru is much deeper and mature than the anime and the manga even has some ''steamy'' scenes. The plot definitely feels much more involved and fast paced than the anime. My only irk about it was that it wasn't as funny as the anime, except for the side stories, but hey, what can you do?
In general, Sailor Moon is a great read for fun or just to immerse yourself in the legend that forever lives.

childhood memories
by morrison
May 6th, 2010, 11:26am
Rating: N/A
Luckily the German anime had the original episodes sans episode 89 which was nt shown.
Over a friend I had I also learnt off the Manga and bought it from that point on

I also think that the manga is brilliant because it is depper and can concentrate more on the characters and the arcs (obv because there is no need of a demon of the day) and I liek the maturing of the characters , and also like the short stories and side notes by the author

Thank you
by Nanoo
January 5th, 2009, 10:26am
Rating: N/A
When I was a little girl I first saw the anime and when I was about 13 I remembered it and it opend a whole new world to me, so I'm just saying that a "cartoon" can really change a persons life --> Thanks to 'Sailor Moon' I've learnded to dream BIG