Login to add items to your list, keep track of your progress, and rate series!
Description
From Evil Flowers:

1-3) Hana wa Knife o Mi ni Matou
Kako Saeki is a senior in high school. She has been modeling and harboring her love for her favorite art teacher, Enjoe. Her heart breaks when she finds out that her love is actually engaged. Now, Kako's innocent love takes a dangerous turn when she finds out who he's engaged to...

4) Yori-chan's Feelings
An insight of how Yori-chan, Kako's big sister, is thinking.

5) Beautiful World
Near the Ipson village, if you venture into the forest, you’ll meet a lonely demon. If he talks to you, he’s going to tell you your fortune, but don’t expect... More...
From Evil Flowers:

1-3) Hana wa Knife o Mi ni Matou
Kako Saeki is a senior in high school. She has been modeling and harboring her love for her favorite art teacher, Enjoe. Her heart breaks when she finds out that her love is actually engaged. Now, Kako's innocent love takes a dangerous turn when she finds out who he's engaged to...

4) Yori-chan's Feelings
An insight of how Yori-chan, Kako's big sister, is thinking.

5) Beautiful World
Near the Ipson village, if you venture into the forest, you’ll meet a lonely demon. If he talks to you, he’s going to tell you your fortune, but don’t expect it to be something good. This demon has been named by the villagers “the insulting fortune teller”. One day, a beautiful red-haired girl named Alice becomes this demon’s friend. He doesn’t want to look into her future, but he might need to… Less... 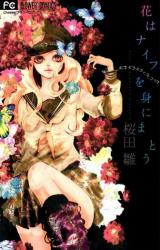 User Comments  [ Order by time added ]
You must login to comment for this series! Register an account.

WOW!
by Omlil
February 26th, 2014, 9:14am
Rating: 1.0  / 10.0
I don't recall ever rating a manga 1 ! but this one deserves it so badly.
This manga sucks! surprisingly, it starts out pretty well and clichéd as expected of a shoujo manga. Then it becomes freakish, disturbing and totally psychotic.... and the turning point, in the end, was somewhat irrational, in my opinion.
It definitely was different from any shoujo manga I've read. too bad it wasn't a good one, though.

Oneshot...
by theLettuceGarden04
March 10th, 2013, 6:13am
Rating: 8.0  / 10.0
...it's awesome! And oh, I'm talking about the Beautiful World one. As for the main story, I liked it too, it was prety different, a GOOD different for me because I'm a perv. Anyway, please read the oneshot, if you are put off with the main story reviews. In fact, the oneshot is like cleanser if you read the main with it- it's completely different to the main story, it's sweet, touching and T.T.
Was this comment useful?  Yes

hard
by Romashk
January 31st, 2011, 3:07pm
Rating: N/A
The art and the story were depressing. Some places were exaggerated and it was hard to follow. And the monologue of each character is too damn heavy. I'd buy an art book of this artist, but I can't imagine myself reading something like this manga in a bigger format(1-2 vols tops).
Was this comment useful?  Yes

not for the faint of heart
by azariie
July 7th, 2018, 5:44pm
Rating: 8.0  / 10.0
I gotta to say it's kind of interesting to read just how much outrage the bad-awful-absolutely-not-okay thing Kako did has generated in the same population that rarely if ever bats an eyelash when confronted with worse abuse by the male leads. Moreso when, as much as I personally hate the "(s)he wanted it all along" trope, I felt Kako's remorse and horror at her own actions was handled somehow better than in usual narratives with a "pushy" love interest.

Anyway. Maybe it's because I had the misfortune of coming across "Korosareru nara, Isso Sakura no Ki no Shita de" first and my expectations were not that high to begin with, but I was pleasantly surprised by how much better the author art got (it's GORGEOUS, art book G O R G E O U S). The transitions were also miles ahead of her previous works and, for once, the male characters looked SLIGHTLY less like creatures of the night waiting to eat you alive. So much improvement all around!

With that in mind, let's say the twisted nature of the three main characters didn't totally caught me by surprise. Sakurada-sama just CAN'T write healthy female friendships, huh? That girl was a sociopath. Kako totally lost it and did come terrible things, but I didn't get the impression she was so far gone. The one I can't quite decipher it's the professor himself- did he really love Kako (or Yuri, for that matter, since he was so easily manipulated) or was this about his ego being stroked? I really can't see that "happy" ending lasting more than a few months, both leads feelings seemed so shallow...

The hidden gem in this volume (the one it totally justifies purchasing it alone) it's "Beautiful World". It's cute, dark and unbelievably beautiful and I really wish it lasted longer. I wouldn't have minded a whole series about Bill/Vil.
Was this comment useful?  Yes

I cried my eyes out
by YanaseRyoko
February 27th, 2017, 11:51pm
Rating: 10.0  / 10.0
I must confess I really love sakurada sensei so much, I love her work its so outstanding is beautiful and the story is so unique and this manga was a proof of it.

Spoiler (mouse over to view)
°°The first story: I liked it and I hated it UGH love sucks but this was too much.
The story is about an stupid girl who is in love with her professor but he doesnt feel the same, so she become nuts and even she loses her dignity. Thats not right.
She didnt get the fact that he was nice with everyone, and he even gives a damn for her.
°Lets move to the professor; I think he started to like her since drawing thing, but he didnt want to cheat his girlfriend, he was honest with her (not with himself but well...) but he was pretty rude too, he was playing with her knowing she had feelings for him, such a lovely man.
°okay and there's this sinister character behind all.. the BFF such a witch, from the start she was just playing with those two, acting like an innocent girl while she was just enjoying the drama from afar
I didnt like the end I really wished for saeko to forget about the teacher and start a new life, he make her suffer denying his feelings for her and treating her badly.

ps I was really expecting a murder but hell no didnt happen T.T


Second story my favorite one..

Refreshingly disturbing....
by moonmystery
July 1st, 2014, 10:46pm
Rating: 7.8  / 10.0
The stories contain some strange content that would gross people out in real life, but in a shoujo story, this actually is a rather refreshing element. I like it, and I believe I'm perfectly sane.
Was this comment useful?  Yes

it's not for me.
by LiitoJ
August 14th, 2011, 10:13am
Rating: 1.0  / 10.0
i was reading the comments and i thought that it'd be something unique and appealing to me but when Kako did THAT to the teacher in his house, it made me go "what the fuck, she's gone crazy" and it just made me dislike the manga from then on. i don't like obsessive female characters. it makes them look pathetic.

it was a happy ending but it was just not to my liking :/
Was this comment useful?  Yes

OMG~!!
by shiira.yuuki.187
July 7th, 2011, 8:44pm
Rating: N/A
Wow,,,, It's been a while since thelast time I cried so hard while reading a manga, this manga is really cute, lots of emotions has been shown. I can related to it since I'm also in love with someone else but he already have someone else (but he's not a Teacher he's my classmate, friends)
Also those drawing are co cute if u look closely

Yeah, the first three chapters are bad, but talk about chapter 5......
by devotedtoanimes
September 14th, 2013, 11:09am
Rating: 9.0  / 10.0
I didn't really read the first three chapters as it got bad comments about it, and i read spoilers of it- and yeah, it wasn't really good... but seriously speaking, chapter 5's plot was flowing really good and the friendship-romance as well.......

Spoiler (mouse over to view)
BUT I DIDN'T EXPECT ALICE TO DIE!! IT WAS GOING WELL AND WARM BUT IT JUST WENT DOWNHILL LATER ON!!! THEY REALLY DESERVED TO DIE- THEY TRULY DO, but the demon doesn't really deserve the ending... he was just yearning for wanting friends, and finally got one, and treasured and loved Alice deeply into his heart, but was unexpectedly shattered by those relatives of Alice's ｡ﾟ(ﾟ´Д｀ﾟ)ﾟ｡ if only chp 5's story was like an otome game, i prefer reading the happy ending instead of the bad ending (/ _ ; )

My rating is 9 but it's ONLY for the oneshot

Definite Miss
by astroasis
January 9th, 2011, 6:18am
Rating: 5.0  / 10.0
Hina Sakurada's manga is sort of hit or miss. The art is always nice, but her stories... Wow. Sometimes they're weird and unpleasant, other times they're cute and likable. This one is definitely a miss. It's basically a manga about a psycho stalker... masquerading as a shoujo manga. It's not creepy enough to be drama or horror, but not actually pleasant or romantic at all. What is this? I don't even... Read "Is It Okay If I Love You?" or the one-shot "A Lesson in Temptation" from the "Secret Love Stories" compilation, instead. Both are far better works by this mangaka. This one's a stinker.
Was this comment useful?  Yes