Login to add items to your list, keep track of your progress, and rate series!
Description
With the author's characteristic humor and creativity, the work describes one girl's fantasy adventure.
Yvienne Magnolia lives in a small village and her beauty turns the villagers' heads, yet she would never have imagined the grand future destined for her.

Because a count tries to kidnap her, Yvienne flees to the Lowood Institution for wizardry and witchcraft, forced to leave her family.

In the school, she meets interesting people, like January Lightsphere who comes from a noble but peculiar family, or Lariatte, an heir to an orthodox fighter family, who might yet become her closest friend.

O... More...
With the author's characteristic humor and creativity, the work describes one girl's fantasy adventure.
Yvienne Magnolia lives in a small village and her beauty turns the villagers' heads, yet she would never have imagined the grand future destined for her.

Because a count tries to kidnap her, Yvienne flees to the Lowood Institution for wizardry and witchcraft, forced to leave her family.

In the school, she meets interesting people, like January Lightsphere who comes from a noble but peculiar family, or Lariatte, an heir to an orthodox fighter family, who might yet become her closest friend. 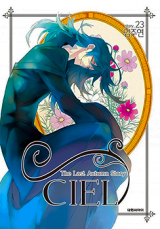 Note: You must be logged in to update information on this page.
Forum Posts Click to view the forum
Why is this manwha called "Ciel"?
over 8 years ago
licensed in english?
over 8 years ago
Ciel Volume 5 Released
over 13 years ago

Like if CLAMP wrote Soul Eater as a 18th century fantasy-europe shoujo trope-inverting romance and then it was axed
by theliongirl
June 10th, 2021, 10:05pm
Rating: 8.5  / 10.0
Reading this felt a little bit like someone wrote a fantastic, epic saga and then was then told, oh we need it to be a third of the length, so they crammed it full of all the awesome stuff and left the rest unpolished.

The main plot points seemed to be wrapped up by the end, and you can definitely tell that the author had a lot of elaborate plans but was hindered by publishing constraints.

The beginning was interesting but not my style. I was getting a little tired of it around the middle and was probably gonna rate it a 7.5 but then the ending came and it was a 9 to me - though it wasn't perfect, I really loved the end. The art is a basic older style but there are a lot of fantastic scenes and beautiful lines.

Unfortunately, there are confusing, erratic scene jumps that sometimes had me feeling like I missed a few places. The narrative was all over the place.

There was some uhhh 'interesting' gender fuckery going on. Idk if I would necessarily say it was bad, but I do think it was handled clumsily. Tbh not surprising for the time it was published.

I liked a lot of the themes discussed in the novel, and there were a lot of interesting characters that I would have liked to see more of.

Definitely recommend if you have the heart
by ZeroLevel
February 11th, 2021, 7:10am
Rating: 10.0  / 10.0
It was beautiful and a tad bit complicated but I cried at the end because of how touching it was. It had a beautifully constructed bittersweet ending that I really liked. Sometimes things might seem random or irrelevant when reading but it will all make sense. The author clearly had the end in mind while writing.
About the romance, I saw some people in the comments talking about how it wasn't centred on Yvienne at all and I just wanted to say, be patient. It's gonna get really good. I'm not going to say who the love interest is because I wasn't sure about it in the beginning while reading and greatly enjoyed my moment of realisation when the author made it obvious. I'm a sucker for their dynamic and relationship and want a man who would be as devoted to me as he is to Yvienne.
Also, just as a warning, if you are going to read this, somehow, in one sitting, prepare your napkins ahead of time. I was running around at home trying to find napkins at 4am.

Only 2 more chapters left but hasn’t been updated in years
by Yaoilalala
November 18th, 2019, 11:16am
Rating: N/A
Starting is a bit slow, but worth a read
Was this comment useful?  Yes

Takes awhile to get good, but overall worth it
by Rozzak
May 15th, 2016, 9:11pm
Rating: N/A
Honestly, just skim through like 60% of the manga. The saving grace of the series is the romance between Krohiten and Yvienne. It's really that good.

It's truly a pleasant shoujo trope-breaker. Yvienne easily sees through the intentions of her suitors. She tactfully avoids numerous "status quo" and "relationship reset" flags throughout the series. "Muh misunderstanding"s usually last for only a dozen pages or so. It does get a little bumpy and cliche around the timeskip, but as soon as they reunite it's fucking great again. Yvienne herself is a very interesting character conceptually too, since it's almost like her personality is designed to contradict an average shoujo heroine. The series had one of the most memorable confession chapters I've ever read too.

So just skip every page with Daughter/January and skim through everything Larri does that doesn't relate to Yvienne/Krohiten.

Also skip the completely and totally unnecessary
Spoiler (mouse over to view)
legal rape/impregnation (by the king) that the female love rival randomly gets around the halfway point so she can be written out (it's literally NEVER addressed after it happens and her character all but disappears).
Was this comment useful?  Yes

LOVE IT
by ::WonderWoman::
February 20th, 2016, 5:40pm
Rating: N/A
There are a lot of mixed feelings about this manga, but I myself absolutely love it! They say the plot to this story is all over the place but I think it's perfect in its own way

Definitely give it a try! Don't dro pit in the early chapters if you're looking for romance, look into it. There will be more romance later on and Yveine herself is just the most perfect female lead. I love her looks, her magical ability, her personality, and her dark side. I love how different she is from the typical female heroine in shoujo manga who are always dependent on the male lead. She's independent, she's strong, she's confident. she's manipulative, she's fun, she's loving, and yet deep down she's flawed too. I think her flaw is what makes her beautiful and mysterious though, She's the perfect female lead. Definitely give this manga a try!
Was this comment useful?  Yes

What is going on with the story?!
by Krimson
January 27th, 2015, 9:25pm
Rating: 1.0  / 10.0
I used up all my patience by 18th volume. The plot became so boring that it did not warrant further reading. I don't understand the 8.6 rating. It deserves a 6, that too is very generous. The characters had no growth, the story showed no improvement, uninteresting characters, boring development and pointlessness are just some of the things I find wrong with this series. I regret all the time spent on this manhwa hoping they'd deliver something satisfactory. Absolutely frustrating!
Was this comment useful?  Yes

Disappointing
by partially
October 31st, 2014, 3:19pm
Rating: 7.0  / 10.0
I am now firmly of the opinion that the author should stick to stories that concentrate on one character. Ciel began and as others have said had a charming whimsical sort of feel, it was one of my favourites. Unfortunately this did not last, the author decided to put in all sorts of portentous moments and characters. As soon as the story focus came off Yvienne, the series ran down hill fast. The author simply does not know how to do a multi-character narrative well. There are significant pacing issues, confusing scene switches, lots of inexplicable moments. The author is writing what she wants to write without really taking into account how it makes sense to a reader. A problem also with the other works I have read by the author.

If she had stuck solely on Yvienne this would have been an excellent work. She was an interesting character.
Was this comment useful?  Yes

I've only read up to the latest scanlated volume, #17, but I'm at the point where the story has taken me somewhere so deep I just can't stop thinking about the feelings of the characters and where the manhwa will go till the end.

I seriously can't get enough of this manhwa, and as much as I love romantic relationships, there is something indescribable about the relationship between Yvienne and Larri, it just can't be labelled and by far my most favorite relationship I've ever seen in a manga/manhwa. It's so pure, raw and just beautiful.

The way the chapters have been sorted on some sites have made the story a bit confusing, but it's so worth pushing through and continuing the series

Charming
by Mizura
September 19th, 2013, 6:38am
Rating: N/A
I am personally quite fond of this series, especially of its main character, Yvienne. By all accounts she should be a Mary Sue, except she is genuinely captivating. Strong, courageous, witty and funny, she just oozes charm and confidence in a way that makes you genuinely like her.

Yvienne is not without her flaws, but she is complimented perfectly by her friend Lariatte. The friendship between the two girls is perhaps one of the most beautiful friendships I've read in this genre. They seem so different, yet cover each other's flaws perfectly, and understand each other so deeply. I find that well-written friendships are even rarer than well-written romances, so their relation is a real gem to me.

This series also has some surprisingly charming art. Although simple-looking at first, the author surprised me with a series of elegant dress designs. The art style ultimately does a great job of bringing out the atmosphere of the series. The plot, though seemingly light at first, turns out to be more complex and surprisingly dark.

hmm
by ScytheMaster14
March 30th, 2013, 6:23pm
Rating: 8.0  / 10.0
maybe it was just the site i read at but the pace was REALLY off, like one minute you're in a battle, then the next you're figuring out where the main character came from, and before you know it, someones about to die protecting the main character cause they love them. it was just really an awkward read for me and even though i really really liked the story i dropped it cause i couldn't keep up with the random jumps in the plot line
Was this comment useful?  Yes