Login to add items to your list, keep track of your progress, and rate series!
Description
From Viz:
Hime Kino's dream is to one day perform voice acting like her hero, Sakura Aoyama, from the Lovely Blazer anime. So getting accepted to the prestigious Hiragi Academy's voice actor department is the first step in the right direction! But on her first day of class she meets Sakura's grouchy son, Senri, who tells Hime that her voice is awful and Lovely Blazers is stupid. Hime will not let that stand unchallenged. She'll show everyone that she IS a voice-acting princess, whether they like it or not!! 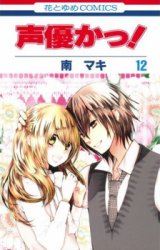 4/10 Boring as hell
by Shellshock
May 9th, 2020, 12:41am
Rating: 4.0  / 10.0
So I finished Voice Over. Its hard to judge this series. Cuz it does so many things wrong I don't even know where to start. First of all there are only 2 characters are i actually liked. BOSS and curses chick. Both were hillarious whenever they showed up but the rest were pretty flat. I liked the main character's issue. She really wanted to be a pretty herione. But she has a rough voice. So she keeps getting casted as a male characters which i thought was a good dynamic, But the author found a way to make it boring. Honestly besides Comedy this entire series felt like wasted potential. the art was fantastic too. But the side characters kept getting sidelined and there romances never come into fruition. The acting part though there were some moments i enjoyed reading majority fell flat and i feel like the author didn't really know what she/he was doing. The author also spent way too much time on the 2nd male love interest who was obviously not going to win. Lots of sideplots were left open as well. I honestly don't know what the author was thinking.
Was this comment useful?  Yes

WHY????
by conanyam
July 6th, 2018, 8:13am
Rating: N/A
i like this actually even though it's cliche, but there's just 1 thing i want to ask the author....
WHY?? why did you cut or rush the ending like that when it seems that that is where the real plot of her dream and romance will truly begin,...? it's such a waste of the potential...
if there's only 1 word that can describe my feelings after reading this manga to the end, its....

Really should've been better
by WhipNaeNae
May 24th, 2017, 11:11pm
Rating: 6.0  / 10.0
The beginning was kinda nice. Clichéd, but still gave me a Skip beat vibe, which is always a good thing imo. The rest was a hot mess. Barely any development between her and supposed love interest. I liked Senri a little but he was barely there for like 20 chapters, and when he was there he wasn't particularly nice to the protagonist. Honestly couldn't help but root for Mizuki eventually.
Then there's her actual goal of becoming a seiyuu. We never actually got to see it?? There should've been like 40 more chapters to be honest, because so many loose ends. Overrall I didn't hate it though, it just... could've been so much better.

Cute... but devoid of plot
by Hanjae
March 6th, 2016, 2:27am
Rating: 6.0  / 10.0
Despite the concept being a little cliche, it's ripe for conflict and character growth... but I feel like everything that had happened in these 70 chapters were nothing more than setup for the real juicy stuff that we'll never get to see because the manga ended right at the crucial point.

Spoiler (mouse over to view)
Essentially, we spent 70 chapters seeing Hime go as far as dressing up as a boy and debuting as a male seiyuu to get experience and become "top class" despite being terrible and apparently talentless. She starts getting somewhere, getting acknowledgement and event winning over Kudou Senri on the way (as both a friend and potentially something more)... and then just as it's about to get good, it ends. Her career is reset because Yamada's "fulfilled his dream" (and I don't even know what his dream even is - was it just to get Sakura to acknowledge one of his charges? What was it?), so what was the point of all this? 70 chapters of work experience where she continuously "tries harder" and eats a lot of omurice by Senri on the way? We also don't get to see any romantic development either, because that too stops just before it really starts. And what happened with Sakura and Hime's mother? Both of them are terrible mothers and responsible for much of the problems experienced by Senri and Hime, but despite the plot seeming to gear up to a massive showdown with Sakura, she was nothing but a cameo.

If there's one thing I want to commend about this manga, it's the fact that Minami Maki managed to sidestep the worst part of a gender bender - the fallout where the hero finds out the female is really using a false identity. I was fully prepared for him to lash out at her in anger, particularly considering how important a friend Shiro was to him, but I was pleasantly surprised to see him react in such a sensible, thoughtful manner. It was unrealistic, probably, but I still liked that his mind managed to switch over from Shiro to Hime so quickly.

All in all, a real disappointment despite a cute and promising beginning. No one really got the character development they deserved, except perhaps Senri, and the most interesting conflicts were just brushed aside without thought.
Was this comment useful?  Yes

And when it comes to the ending, it may not be axed but it beeing rushed dosn't make it better. I don't have the feeling that something really important has been cut of... I just think the ending could be a bit longer and explanatory.
--> I am not putting this in a spoiler because I think you should be "warned" before attempting to read Seiyuu Ka.

Refreshing
by Nirachu
April 23rd, 2014, 8:35pm
Rating: 8.0  / 10.0
The main strengths of Seiyuu Ka! are its refreshing characterisation of the two main leads and the really nicely developed relationship interwoven with their own character development. What I really liked about the relationship was that it wasn't approached as a typical girl falling in love with a guy story (but neither does the guy fall in love first, really). They start out with their own ambitions, their own independence as characters. Much of the relationship being developed occurs when the main female lead is crossdressing as her alternate male "stage" sort of persona. This means that the main male lead actually gets to know her as a person first and foremost, not just as a potential love interest.

And the characterisation was wonderfully done as well. I loved how the main female lead wasn't overly girly, but I suppose that's to be expected since she does crossdress as a boy regularly throughout. The main male lead as well isn't the typical cool, uber talented male lead, but rather refreshing; he is also endearing, calm, a bit cute as well. When he finds out the main female lead crossdresses, no pointless drama/tension unfolds. He may hesitate and worry on the inside but thinks things over before acting and handles the situation calmly like a pro.

Oh, one last thing I feel worth mentioning. Some others have complained about the ending being too rushed; I disagree. Any more longer, it would have just been unnecessarily drawn out, nothing else really needed to be added, and I commend the author for knowing when to stop a good story.

The characters were also adorably lovable....

until..... the manga fell flat with that very very DISAPPOING ENDING

but.... other than that the manga was a BLAST.

a little disappointed
by evinrud3005
November 19th, 2013, 11:09am
Rating: 7.0  / 10.0
I liked this manga for its theme. But there are still a lot of flaws. The fast ending is leaving a lot of questions unanswered and I feel sad because I really liked this manga. Misaki's feelings, the why she was choosen in the school even though she has such a voice, how after only 3 jobs she can get successfully such a big role... It is a shame.
But it's still a nice read and a 100% shojo with all the clichés that comes with it. But if I didn't like it, I wouldn't have started it right?
Was this comment useful?  Yes

Has it's charm
by Joniness
October 22nd, 2013, 11:54pm
Rating: N/A
This manga is not bad or good (I basically read it for the cross dressing)...up till to the end at least, then it gets incredibly rushed and peters off to an unsatisfying climax. I'm sure that it was probably because the mangaka/their editors/the magazine wanted to end it for whatever reason and not because the mangaka couldn't make a better ending. Or maybe they can't end things? I haven't read Special A in years so I don't remember the end that well. Anyway don't go in expecting a masterpiece, but I read all 70 chapters so it has something going for it, except that end, bleh.
Was this comment useful?  Yes

the characters are very well developed i love the development

some back storys are kinda out of the blue and im like "what triggered this??" (probably just me ) but i understand we you gotta tell us why this person is like this one way or another

unfortunately i felt nothing for when it ended .. i felt it needed 1 or 2 more chapters to tie everything up ,like seriously ?

cliched yes , repetitive yes but you wont notice i swear
i really wish they built up to the ending

but for some reason this left me feeling empty i didn't have much emotion for the ending .. '_____' its forgettable to me.. but i really did enjoy this and had fun every page i read