Login to add items to your list, keep track of your progress, and rate series!
Description
Kaizaki Arata is a 27-year-old, out-of-work man who has failed at each and every job interview he has had after quitting his last company where he only lasted three months. His life changes after he meets Yoake Ryou of the ReLife Research Institute, who offers him a drug that can change his appearance to that of a 17-years-old again. Taking the drug, he becomes a subject in a one-year experiment in which he begins his life as a high school student again.

Note: Nominated for the 39th Annual Kodansha Manga Awards in 2015. 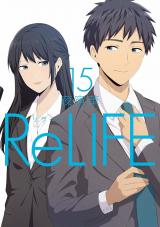 Note: You must be logged in to update information on this page.
Forum Posts Click to view the forum
ReLIFE to End in March
over 4 years ago

First of all, let me get this out of the way, the art is fantastic! FANTASTIC! I thought it was like a really well drawn webtoon, turns out it's a Japanese manga in the webtoon format. 10/10 for art, though maybe I should subtract a point for the overuse of sparkles and petal backgrounds/patterns (I forget the technical word for them). But there were SO many panels where I just have to try and make it fit on my screen so I can just sit and admire the art. So many, as in on average multiple per chapter and there's over 200 chapters.

Moving on. So, you've read the blurb/Description, you know what it's about.
The first half of the series is filled with mostly positivity with some gloomy/serious moments as the main guy, Kaizaki, betters himself and heals himself primarily through healing those around him. He very easily slides into the role that the program wants from him, which makes the occasional backslides and depression/ptsd hit all the harder.

The second half of the series shit gets more real as even most of the happy moments are layered, hidden under a film of bittersweet tragedy, for lack of a better word. And it is so so well done. The author shifts the frame of the story in exactly the way I would want, it feels like the best execution of the best ideas I would come up with for a story with this premise.

It is for this reason that, even though I had a pretty good idea of the 'twist' of the story, I still didn't mind being able to deduce it because it was done so so well and was simply a great idea anyway. Though unfortunately a little bit of the clues are lost through some translation error, there is still enough for you to pick up/theorise on it

Turns out there's an anime and a live-action film. Idk how a single film could properly capture all the slow build-up that pays off in the second half, but hey maybe I'll check it out some time. IF ANYONE FINDS THE SHORT STORY TRANSLATED PLEASE MESSAGE ME A LINK!

Criticisms:
Firstly, the pseudo-science behind it obviously makes no sense. I appreciate the effort of the rough idea of how the pill works, but in the end it doesn't actually make sense and isn't quite...logical in how the memory erasure actually happens. But this is simply something we have to hand-wave away as phlebotinum, cutting the author some slack because ultimately the story is about the characters related to the project and how they heal rather than the project itself. It's about the journey, not the car.
It does go a little much on the melodrama once or twice (we get a scene where a girl is hassled during a festival and needs to be saved, which was disappointing. I was hoping she'd extricate herself from it, cos it's a cliche, but hey at least she was reasonable throughout and it only went for one chapter). I can't think of the main melodrama thing that jumped out at me during reading, but I guess that's a good thing.
Also a couple of the plot points are kinda just high-school kid issues, but that makes sense considering the story itself. And this is occasionally lampshaded and generally done well and sensibly.
The main issue I probably had is the backstory of the main guy Kaizaki and what happened at his previous job. I felt unsatisfied, not with how it was conveyed, but by the lack of justice and the lessons he takes away from it. I feel like if such a serious thing is going to be brought into the series, the takeaway shouldn't be
Spoiler (mouse over to view)
'I shouldn't have tried to help or say anything'. Rather his method of going about it was the problem
but it wasn't really gotten into in that way. It was mostly there as a trauma and something to move on from rather than something to learn from.

With the above criticisms I guess a 10/10 wouldn't be realistic. However I'm rating this based on enjoyment and how much I would recommend it. (critical rating I would probably give a 9 or 9.5)

P.S. be sure to read the epilogue.

Truly satisfying
by Drull76
May 16th, 2021, 1:09am
Rating: 10.0  / 10.0
No other words could describe this series other than satisfying. It tells the story of a failure and that the only ending to everything is when someone really give up. The character development is so good, we can clearly see the difference between early chapters and ending. The pace of the story is neither slow nor fast, it is perfect. And the ending? The original ending is already so beautiful that I don't really expect another epilogue, but there is one. And I have to say, it's even more beautiful than the original ending. It settles every remaining loose ends and becomes the perfect cherry on top of the cake. Definitely one of the best I've read.
Was this comment useful?  Yes

Translation from Tankōbon needed.
by Oppai_Senpai
July 20th, 2019, 9:58pm
Rating: N/A
It is kind a pain to read the Long-Strip Web manga. Hope someone will pick up the series from where crunchyroll has left it.
Was this comment useful?  Yes

Ahem. This was a pretty fantastic webtoon. I enjoyed re-reading it after and seeing just how long the mangaka has been setting up for certain reveals - it's nice to know that a lot of the twists were plotted out ahead of time.
Was this comment useful?  Yes

Amazing
by agartha
March 12th, 2018, 7:59pm
Rating: 9.5  / 10.0
This is so worth the read, once, twice or many times more. The ending is a bit rushed but is in no way unsatisfying. The pacing is kinda slow and there are a few outstanding character traits between the main roster that get a bit worn/creates unnecessary drama, but we see great growth from these flaws. I really dare to call this a masterpiece for its genres and am glad for the open-end ending and hope for a sequel.

Not enough content for so many chapters
by Mytskine
October 6th, 2017, 8:23am
Rating: 7.0  / 10.0
This manga is mostly a highschool slice of life. Up to volume 6, it's a pleasant read, where the adult minds in young bodies add comical seasonning, and sometimes original behaviors. Much refreshing.

Unfortunately, as time goes by the author seems to struggle with its story. After chapter 100, the story becomes more and more erratic, with many flashbacks, retakes with another POV, focuses on secondary characters, etc. Later on, the "report style" is used frequently, which mean that instead of viewing the situation as it happens, we are shown a report of the situation filled with comments from the observers. This focus switch obviously lengthen the content but kills the mood.

Though I really prefer hand-made B&W to these flashy colors that lack subtlety, the quality is okay, nothing like the mainstream web comics. At chapter 98, the manga switches from a paginated view to the "eternal scrolling" web view. This simpler, more linear view, fits the simpler, more empty story of ReLife post volume 6.

Unique
by Day Dreamer
November 19th, 2016, 5:11pm
Rating: 8.0  / 10.0
The ReLife experiment gives you the ability to redo a part of your life after a critical setback. You get paid but you have to hide this secret from the rest of the world. ReLife is one of those webtoons that leaves you invigorated. It is a slice-of-life story that gives important implications about relationships and living in the present moment. One of my favorite aspects of this work is Sou Yayoi’s beautiful artwork. The drawings are immaculate and the mirage of colors illustrates extraordinary talent. But you should start this webtoon for the comedy if for nothing else. There are many comical moments that are well done and made me laugh unexpectedly!

This isn’t finished yet...it’s currently on chapter 152 and I honestly don’t know when it will be completed. But, I’m not anticipating anytime soon and if you enjoy realistic comics that give you happy feels and hope that there is more to life than a series of unfortunate events, then I highly recommend it! At least try the first few chapters and see how it goes.