Included in the final volume of the Revised Edition is SONODA Kenichi's four-chapter manga "Riding Bean", which was previously only serialized in Monthly Comic Noizy between December 1988 and October 1989. It was cancelled when the magazine ceased publication, and ended up never getting it's own volume. Less... 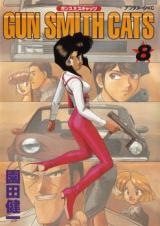 Overall, a pretty good action manga
by lynira
February 27th, 2011, 10:39am
Rating: 6.5  / 10.0
I read this about a year or so ago, but from what I remember, this one is a pretty good action manga. I remember bits and pieces of the story--it's not particularly remarkable, but I think it gets the job done as far as action goes. As for the art, it's mostly fine. The author is a little sloppy with the lines sometimes.
What I liked best was the way the manga gave details of different guns and cars; it made it feel like the author really put effort into the manga. I also like learning new things, and since I don't know much about guns or cars, it made things more interesting for me. It also helped make this manga different from other ones, where the focus is usually only on the action and details about such things are usually glazed over.

What I really did not like was how the author changed the character of May later in the series.
Spoiler (mouse over to view)
At the beginning, she was quite likeable. Maybe a bit childish, but I thought she had a cute demeanor and complimented the protagonist well. But later on, the author has May acting like an unrepentant slut by happily having sex with random people and masturbating on-screen, and having a shameless ongoing affair with that guy (I forget his name). She is also underage (17, but she has worked as a prostitute since 13), which makes it even more distasteful.
You just don't do that to a main character if you have any concept of good taste. Maybe to some sick, twisted side character (which, I guess I should tell you, there are plenty of in this series--but I think they were all antagonists, and so their contemptible actions were displayed with contempt, as they should be), but not to a main one. Mangaka, please always remember how necessary good taste is to a good manga!

A fun read
by Neofit
August 7th, 2010, 3:50am
Rating: 7.0  / 10.0
While the characters, even though interesting and fun, are one-dimensional, the action is sometimes bland and the story is rather uninteresting because of its episodic nature, this is very much a fun series with beautiful art and great action sequences.
Was this comment useful?  Yes

a fun read for a summer day
by Xiong Chiamiov
June 5th, 2010, 7:02pm
Rating: 9.0  / 10.0
Gunsmith Cats is all about guns, muscle cars, and sexy girls. While the story isn't anything particularly amazing, the action is constant, and I had no trouble reading a few hundred pages at a time. New characters are introduced often enough to keep things interesting, but infrequently enough that I could actually keep track of them.

Kenichi Sonada initially made a Riding Bean manga, but after some difficulties with the publisher, he revamped it a bit and made Rally Vincent the focus. This was a good marketing move, as Rally is goddamn sexy (and kickass, like an American girl should be!). The chapter headings show that Sonada was well aware of his male audience - it's not uncommon to see one of the female characters posing with a weapon and less than usual clothing.

The omnibus editions published by Dark Horse are shrink-wrapped and marked for mature audiences. While a bit puzzled by this (having watched the anime first), it became evident later on, as in the first volume you get May having (censored) sex with someone for a few frames, and a full two pages of her masturbating later on that look straight out of an H. Both Rally and May manage to lose their pants once in a fight throughout the series, and nipples will show up when you least expect them, including on a few loli-types. There is, of course, a great deal of violence, although not to the extent of something like Hellsing.

While I am an expert on neither cars nor guns, I can tell that a great deal of attention was given to accuracy in both areas. The portrayal of American Chicago is fantasized a bit, certainly, but doesn't seem to inherit any odd Japanese cultural things, as many series have a habit of doing.

Overall, a fun action-y read on a lazy summer day, and a great deal to purchase.
Was this comment useful?  Yes

If a 14 year old made an action movie...
by Chas
January 18th, 2007, 3:51am
Rating: N/A
This is a sorry excuse for a manga. It's set in Chicago and features two female bounty hunters. Now, the premise could have been turned into something good, but it fails in every respect. The technical aspect of guns is something the author knows well, but the execution of this knowledge is extremely poor. The skills of the main characters are so blown out of proportion that it becomes ridiculous. She can look at a gun, and know everything about it's condition. She's got lightning reflexes and perfect aim. The author basically knows nothing about how to handle a gun, despite the fact that this is what 90% of the manga is focused around. Basically, the author seems to have the same world view as a 14 year old kid, who's watched too many action movies. It basically becomes boring, as the author thinks nonchalant violence and superskilled protagonists are somehow cool.

To top it off, the manga is in really bad taste. Now, I don't mind bloodshed in manga, but it's just so exaggerated. People die all the time, to the point where you just stop caring. The author even pulls out stuff that should have been left alone... for example, a naked, teenage girl gets her head blown off for no particular reason. Sure, I like adult material in manga, but who gets off on that?

Basically, the whole thing feels cheap, stupid and even sadistically perverted. The art is nice and all, but the ecchi material is completely ruined by scenes of young girls getting their heads shot off, so even those who'd read it for the adult material have nothing to gain here.
Was this comment useful?  Yes