Login to add items to your list, keep track of your progress, and rate series!
Description
Everybody has a dream, and for Shou Kazamatsuri, that dream is simple: he wants to be the best soccer player he can possibly be. He's the spirited leader of the Josui Junior High team and everyone looks up to him. In turn, he tries to keep the team together at any cost! 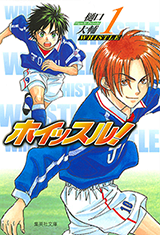 Note: You must be logged in to update information on this page.
Forum Posts Click to view the forum
Compared to anime?
over 10 years ago

Sho, you wonderful boy
by Knight?4
January 21st, 2022, 1:36pm
Rating: 10.0  / 10.0
The first sports series that I read and actually enjoyed. All the characters are wonderful. I will never get tired of reading this series. There's a sequel. Anyone else enjoyed reading this?!!
Was this comment useful?  Yes

YES!
by xadako
February 23rd, 2015, 6:53am
Rating: N/A
I always like sport manga, and Whistle! is probably my favorite!
Whistle! is the very first manga that makes me realise that romance is not really needed if another thing can make up for it, which is: friendship, teamwork, and sportmanship.
I pretty much prefer this than Captain Tsubasa, because it is more realistic. By realistic, I mean, our main character here is NOT a prodigy and he has so many handicap and troubles, yet he can cover all of his weakness by practicing hard. At least, THAT is much more realistic than Captain Tsubasa, who always (almost) wins every of his match. (and there's no weird skills which can make a hold through the net. lol) Now don't get me wrong, I do like both, but I just fall in love with Whistle! more <3
If people says that the characters look almost the same, I have to deny that. Maybe they all look the same because of the hairstyles or hair color, but I can clearly tell the difference. I think, if you have to draw more than 20 boys in one series, you'd end up drawing a similar hairstyle. And I don't see it at all in this manga.
Anyway, the artist is really good at drawing all those body reflexes and stuffs. I even have to read twice and imagine how some moves work out in real life. Haha.
I really want a sequel, because the manga just ends right on that "U-19 team" part!
Was this comment useful?  Yes

the complete manga
by Silvergoku
July 2nd, 2014, 7:17pm
Rating: 8.5  / 10.0
After completing the manga I have to say, I found the ending satisfying but not great. I started with the anime and continued to the manga and honestly I think the anime left me happier in the end than the manga did. The manga is good, Sho shows you what hard work and will power can accomplish going from an ordinary rock to a diamond. My only warning is don't expect a future ending that you would think would happen. The manga pretty much ends in the same way as the anime meaning not showing the progress everyone was hoping for just yet.
Was this comment useful?  Yes

The problem with this manga is that
by enaikelt
September 14th, 2011, 11:51pm
Rating: 9.0  / 10.0
Everyone looks the same. I've seriously been reading 200 chapters about these guys now, and I still don't know who most of the members of Tokyo Select are. I can kind of tell Shou apart... sometimes... but if Tsubasa is in a smily mood, it gets pretty tough.

The other thing I don't entirely care for is that Shou almost always wins... and it's usually in a similar manner, because of willpower, or something, or something. Or it's a tie. Any team he's in very rarely outright loses.

That said, though, it's a good read. Catchy, absorbing, uplifting in the way that sports manga usually is. I can't say that it's in the ranks of stuff like Eyeshield 21, though.
Was this comment useful?  Yes

A good soccer manga to read.
by HanaTenshiHimeko
May 15th, 2011, 11:17pm
Rating: 10.0  / 10.0
It's not as dramatic as Prince of Tennis with crazy moves. I tried Captain Tsubasa and it was too dramatic for me. For this series, the aritist does it in balance. It have its quiet moments, to let the loud actions to stand out.

You'll noticed that throughout the series, the theme of hardworking is stressed everywhere. Despite the prodigy is short and not that good in soccer in the beginning, Shou still didn't give up and continued to work hard to make up his weakness.

Character developments is good. It ranges from the main character to the side characters and it somewhat connects to each other, especially with some character's past who are connect to the prodigy's past.

My only complaint was the ending, It was unexpected, but at the same time, when I read the author's notes, I understood why the author did that and it was to help with Shou's growth. I wish there were more short scenes following after the ending. You have to read the omake comic strips. They made me laugh, even though some were just a pfft laugh or laughing my head off.

THIS!
by matt_is_the_best
December 11th, 2010, 5:03pm
Rating: 10.0  / 10.0
is possibly my favourite manga series now. i absolutely love it. whenever i get a job, i am going to buy all 24 volumes and try to share sho's greatness with everyone! i am sooo glad my school library bought this series. it's very inspiring too. i actually felt like i was in the game, and almost decided to try joining a soccer club myself. .. too bad i'm lazy and no good. but, because of this series! i will definitely watch soccer games more often on tv! hopefully i can even go to the world cup in the future! =)
Was this comment useful?  Yes

Awesome~!
by nadesiko
July 1st, 2009, 4:38pm
Rating: 10.0  / 10.0
It's amazing! Generally i don't like sport manga, especially soccer, but this one is really worth a trial. It's the first manga without romance that i love so much!
Was this comment useful?  Yes

Why do we like it?
by monbobley
June 9th, 2009, 4:55am
Rating: 10.0  / 10.0
When I try to think about what's so great about this series, nothing particularly jumps out at me as special. The art is good but not exceptional, and the characters are endearing but both them and the storyline structure share too many similarities with other well known manga. Yet despite that, I love this manga because it succeeds where so many others fail. It has that rare quality that only amazing authors can give to a story and it's readers; the burning desire to come back for more and more and more. You know that it's a superb manga when, even though it has hundreds of chapters, you can't put it down ... and you go to bed at night unable to sleep, thinking all you want is to know what happens next in the series. Whistle! is excellent manga that everyone can enjoy, and will keep you coming back for more.
Was this comment useful?  Yes

Entertaining with a but...
by mith
June 7th, 2009, 11:55am
Rating: 7.0  / 10.0
Well, i like this series, its funny, its got likable characters and the art is also not too shabby. As for the but, the author is kinda hard to judge if he's got good knowledge of soccer or if hes a complete newbie. What bothers me the most is the complete ignorace of fouling rules. The players kick eachother, fullfill martial arts like kicks, tear eachothers jerseys, run into goalkeepers like stampedes and play extemely dangerously overall. This kind of behavior would send most of em off the field but in this case it doesnt seem to bother anyone. Infact ive counted 3 fouls in 21 volumes, thats ridiculous considering how dangerous they play. This might be a detail in a manga but fouls are a important in almost any sport discipline, and thats why it kills the mood and the credibility of a sports series if those rules are missing. So coulde've been a 9 instead its just a 7 for me
Was this comment useful?  Yes