Login to add items to your list, keep track of your progress, and rate series!
Description
Shigeharu Honda is a Japanese League batter on the rise. His son Goro is a Little League pitcher who one day hopes to follow in his father's footsteps. Momoko Hoshino, Goro's schoolteacher, is the first woman Shigeharu has been interested in since the death of Goro's mother. The destinies of these three individuals will become intertwined as father and son experience both heartbreak and triumph on the baseball diamond. But when an unspeakable tragedy visits the family, it will take everything they have to pick up the pieces and reclaim their dreams.

Note: Won the 41st Shogakukan Manga Award ... More...
Shigeharu Honda is a Japanese League batter on the rise. His son Goro is a Little League pitcher who one day hopes to follow in his father's footsteps. Momoko Hoshino, Goro's schoolteacher, is the first woman Shigeharu has been interested in since the death of Goro's mother. The destinies of these three individuals will become intertwined as father and son experience both heartbreak and triumph on the baseball diamond. But when an unspeakable tragedy visits the family, it will take everything they have to pick up the pieces and reclaim their dreams.

Note: Won the 41st Shogakukan Manga Award in the Shounen category in 1996. Less... 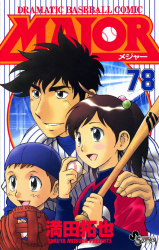 Note: You must be logged in to update information on this page.
Forum Posts Click to view the forum
Baseball Manga Major to Resume After 5-Year Hiatus
over 7 years ago
Takuya Mitsuda's Major Baseball Manga Nears Its End
over 12 years ago

Drama That Makes No Sense + Sports Manga
by kurotaito
December 31st, 2020, 1:19am
Rating: 7.0  / 10.0
This checks off all the boxes to make an average sports manga: characters gain new skills, friends become rivals, rivals become friends, small love subplot between leads. Sadly, you need more than this to become a great or even above-average sports manga.

The author attempts to be better than his peers by having an emotional look into the lead character's family dynamic. The author does such a poor job at this, that he shouldn't have done it at all.
Spoiler (mouse over to view)
Momoko has been proposed to at least twice by characters who barely talked to her before the proposal!!
Another downside, is that the adults are willing to let children literally damage themselves beyond repair for a child sports event. It is one thing for a player to make a decision on the field, that their pain or fatigue isn't as big as they think. (All players have done this at one time or another.) However, it is bad coaching and parenting to knowingly allow someone to play anyway.

Top 1 Baseball Drama.
by Green Mylle
November 29th, 2014, 10:37pm
Rating: 10.0  / 10.0
The series that made me love sports manga/anime and freaking BASEBALL.
Not that it's my first, Slam Dunk/Hajime no Ippo was probably my first Sports anime.

But good heavens, as been said a lot, the anime one was really good.

One of a kind on it's own. DRAMA + SPORTS = MAJOR.
Friendship, Teamwork, and Dreams that was always depicted in the story. It's all same in every season but you just can't get enough of it.

The Main Character Goro may seem typical as he is the usual stubborn kid with a huge passion for baseball, but to heck it blends well with the story. This sh!t had me crying from the beginning.
The process of Goro growing to be a Man of his dreams, A Major leaguer.

This is my weakness, Stories that has Friendship and Dreams as the main point.

While Oofuri, Daiyou no Ace, Cross game One Outs are all good, Major will forever be 1.
Was this comment useful?  Yes

Watch the Anime!
by Bleach-No1-Manga
March 15th, 2013, 6:12am
Rating: 10.0  / 10.0
The manga chapters are missing translations so go watch the anime because i think this is one of the Best adapted Manga-to-Anime i have ever seen

We get to see the whole Goro going from a Small Kid to a fully accomplished brute man spanning 6 seasons of Drama, Comedy , Tragedy and Romance as a sub plot

after watching those Final moments i shed manly tears, what a great journey it was, i think this ranks high up among all the great Shonen Sports out there Slam Dunk, Eyeshield 21 and One Outs Truly one of the best

NOTE: This rating and Review was for the ANIME Version

Now that's how you play mind games. Pretty soon all the other kids are gonna be on edge wondering why the **** he never threw a curve.

A good read/watch
by torrentchan
May 29th, 2010, 11:22am
Rating: 9.0  / 10.0
The anime hooked me in. Amazingly it still continues. Yhe story is kind of epic, but Goro's undying motivation attracts many viewers, like myself. People, give this story a try! Not too bad art, good storyline, good baseball, good character development, good motivation, good heart pullers (pull you heart in some scenes) and isnt like those romance gooey gooey things--- there is some romance but it concentrates on the other important things---which is a PLUS PLUS for me!!!
Was this comment useful?  Yes

Exciting!
by Dragonfiremule
November 23rd, 2009, 11:19pm
Rating: 10.0  / 10.0
So exciting! <3 I read all the manga scanalations of the first volumes that were out but since there was a giant gap, I decided to watch the anime until I got caught up. I must say, where in talent-manga/achieving-your-dreams manga are concerned, this one is freakin' top of the line. Its up there with Glass Mask and Skip Beat. Not to mention the sports aspect is good within itself, although I don't really know much about baseball.

Okay man
by kaloo
October 29th, 2009, 7:34pm
Rating: N/A
Let's be straight here. Major - Dramatic Baseball Manga is half Soap Opera, half baseball and half shounen manga. It is a blend that shouldn't work but totally does. I mean it's got the generic Soap Opera Plots laced into the baseball which is led by the protagonist's Hot-blooded anime personality. It's awesome.

It's a shame you need to cut to the anime because of the gaps but even then it still shines.
Was this comment useful?  Yes

Watch the anime!!
by JHax9999
May 29th, 2009, 1:24pm
Rating: 10.0  / 10.0
Yeah... there are huge gaps in the manga scanlation, but don't let that make you miss out on this great story. For the missing volumes, I recommend you watching the anime to make up for it. There are 5 seasons out already. The anime is just as addicting as the manga, and it follows the manga closely. So, you don't have to miss out on this manga, and don't have to skip volumes either.

Anyway, this manga is one of the best sports manga out there. It follows the life of one character from childhood to early adulthood. You'll really fall in love with the characters here, as they are all very relatable. The story itself is very well-written. There are tear-jerking moments, and moments that fills you with excitement. There's romance and rivalry, and competition...all the elements that make up a great story. I honestly can't think of any reason why anyone would not like this.

Great Manga
by tsunade666
April 28th, 2009, 1:13pm
Rating: 10.0  / 10.0
The anime is cool and all but the manga is better though to sad no translation. Just looking at the raws its pretty much entertaining and with the aniem to back some up its good. But the manga is better its just to long sometimes and the anime is fast but in a good pace.
Was this comment useful?  Yes

Read it, read it not?
by fieryeagle1
April 18th, 2008, 2:40pm
Rating: N/A
From the look of it, this manga must be continuously progressive so I wonder if I should read it while leaving such a big gap between volume 2 and 33? If it is very good, that is even more the reason not to.