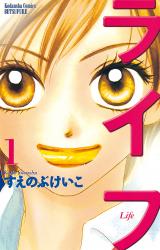 Note: You must be logged in to update information on this page.
Forum Posts Click to view the forum
Life the manga
over 9 years ago
Life by Suenobu Keiko
over 13 years ago

Spoiler (mouse over to view)
The romance was really under done. Yuki basically confessed to her at the end, and she didn't hear him.
Was this comment useful?  Yes

I reccoment this Manga, I enjoyed a lot the first half, but mostly because I enjoy the "Despair" theme and the self-hurting premise was really interesting.

Btw, the manga was more sad and depressing before the "unrealistic" bullying started, then the history became kinda boring and predictable.

As always, the "Mary Sue" ruins the protagonist.

Spoiler (mouse over to view)
I waited till the end to see Shii-Chan appear (the middle school friend), i wouldn't even care if she just did a small appearance saying hello.

The ending was "meh", if someone stops reading at chapter 60 would be the same, there is no more character development and is really predictable.

The teachers are also STUPID or may I say like cardboard boxes for decoration. The heroine is clearly being bullied and they still didn't notice...
The bullying from her classmates are too exaggerated!!!
I would die if I was wrapped in a plastic bag and pushed in the stairs, but the heroine came back unscathed...

I'm not happy while I'm reading the girl being bullied..
I get the message that students get bullied up to this day but must the author prolong the heroine's agony...
In this manga the PARENTS, POLICE, and ADULTS are useless props and are blind for not seeing the exaggerated bullying that is happening in the story...

I'm starting to hate shoujo mangas again..
If you want too read it for the sake of FEEL trip then go ahead..
But the bullying is getting out of hand and too UNREALISTIC....
The manga only revolves around 20 volumes of UNENDING and UNBELIEVABLE cycle of bullying or should I say harassment...

Too much crying
by BreakingSpades
January 24th, 2017, 5:10pm
Rating: N/A
I liked it, even though it was unrealistic. Bullying is a real problem but this was over exaggerated. The main character kept driving me crazy with all the tears. Even by ch65 she was crying over miki being supportive. Over all I think it was good. I binged read it in one day lol. Anzai is a crazy bitch lol
Was this comment useful?  Yes

Sad
by hotarusasaki
July 21st, 2013, 3:51am
Rating: N/A
I found it as quite a sad story, that pretty much made me cry in most chapters, but then again I like sad or touching manga's and I cry pretty easily when it comes to manga. The saddest part is just what happens in the story could and does happen in real life even if it doesn't happen to you or anyone around you. I really liked the moral of the story though, this story isn't just some shoujo where it's just a cute girl falling in love with a hot guy which personally sometimes get me wondering what's the point in reading it. This story actually makes you see things from different views and tells us how you can be part of the bullying just by standing there and letting it happen, and to stand strong even if there's no one supporting you. It also makes me want to choose my friends carefully, and to have your own ideas instead of just agreeing to everything. Personally I could sympathise with the main lead half of the time so I guess that made me like the story more. For those that don't want to read this because you think the main leads a wimp, she does actually get stronger. Although its not stronger as in she suddenly could do all these martial arts (it'd be a interesting development if that does happen though XD) but stronger as in she learns to stand up for herself instead of just being pushed around.
Was this comment useful?  Yes

SORRY ABOUT MY BAD ENGLISH
by Jalapeno-san
May 25th, 2013, 12:21pm
Rating: 10.0  / 10.0
Unrealistic? No. Exaggrated? Yes... but that is to make this manga more intense.
It awakens feelings of terror, shock and sympathy. Makes us question the morality
of our actions and what would we have done instead of the main character.

Also bullying in Asia is like this. My aunt told me some girls would humiliate
other girls pulling their skirts down, make them eat dirty food etc.

Mangas who makes us think more deeply, from others point of view... mangas like
these already deserve more than 8/10. Add few psychopaths and decent art and
I think you already deserve 10/10.

Also it's a huge plus the author touched such sensitive subjects as rape and suicide.
Was this comment useful?  Yes

Unrealistic
by levatein
June 25th, 2012, 9:18pm
Rating: N/A
Having marathon the whole series up until the latest chapter [67], for some reasons I was urged to write several criticism of the series.

Spoiler (mouse over to view)
1. Lame heroine
The point tells everything. I personally don't understand why is it so hard to communicate and tell whatever she experienced/suffered to someone, AT LEAST her family. On the contrary, she just kept it to herself to gradually worsened the bully. This is where I found it somewhat unrealistic (except the kidnapping and delinquents). I know that in real life there are some cases of someone who couldn't talk to anyone and had to bear with the bullying, but most of them are certain cases such as broken family, internal conflict, or whatever psychological reasons. But in this series, the heroine's family were just perfectly fine and I don't see any reason not to talk to them only because she thinks noone believe her. In addition, does a voice/video recorder to get evidence ring a bell? However, good thing that during the process the heroine grows stronger and stronger...

2. Sudden change of character development/behavior
This issue is also rather strange for me. Although the series has drama, tragedy and psychology in it but all still seems unrealistic. The biggest sudden change lies to Chika. At the first few chapters, her personality is courageous, good and value friendship. In the middle part of story, she changed for worse to be submissive to Manami. Then after Manami got picked on, she suddenly (again) to the bossy, cunning type of character. And her personality changed in a matter of few days. Well, that's some psychology for you.

Overall, I don't have any problems with the series. It's just somewhat... unrealistic. The story is going down and turning into more and more stupid so much it pissed me off. Well, it's rather complicated feelings when you read this.
Was this comment useful?  Yes

But it kept me hooked till the end.
Was this comment useful?  Yes

Really, it depends.
by Jeshia
November 15th, 2011, 8:13pm
Rating: 7.4  / 10.0
Before people start bashing the story because of the extremism, please consider that Japan is a different place, and the school, while fictional, is quite a realistic portrayal of an actual school. Bullying is not a phenomenon as it occurs everywhere, and this manga is a close-up account of what can happen to a person. It's not extreme. Her reactions, based on her character, are quite predictable as well as saddening.
As far as people's reactions to "why aren't the teachers doing anything?" Ha. I almost want to laugh at that. You seriously think that does anything? I think most of us have gone through the experience of tricking the authorities or at least having the authorities do NOTHING AT ALL. People naturally prefer the easier life. For many, it's easier to pretend as if bullying or other negative events never happened, /i/ even if they're reported. /i/

My critiques of it include the length coupled with the drama. I felt that the message of this manga was well delivered, yet I think it could have been neater and more poignant. The way the author drags it out makes a potentially profound story almost irritating to read.

My end comment? If you like something that hops on almost all the touchy teenage issues with a psychological perspective, go ahead. If you like "normal shoujo" or don't like shoujo at all, don't bother. Really, if you're looking for a REALLY good psychological manga, you should look elsewhere.
Was this comment useful?  Yes

Disturbing
by netwizard
November 1st, 2011, 12:14am
Rating: N/A
Well, I read it up to 7th chapter and I find this very disturbing.
Tortments, violence, cutings... I expected heroine to gradually grow,
become strong so that she can overcome it, but according
to the comments below it won't happen. Too sad..
I don't want to constantly shiver when looking at cuttings
and suffer as heroine suffers being bullied.
Dropped