Login to add items to your list, keep track of your progress, and rate series!
Description
Karin is a cute little girl who also happens to be a vampire... with a twist. Once a month, she experiences intense bleeding from her nose-we're talking gushers! In other words, she's a vamp with blood to spare, so rather than stealing blood from humans she actually gives her blood to them. If done right, this can be an extremely positive experience that benefits the "victim" as much as the vampire. The problem is that Karin never seems to do things right! 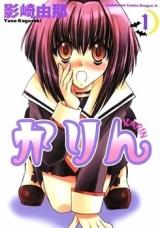 Note: You must be logged in to update information on this page.
Forum Posts Click to view the forum
Karin x Hekikai no Aion crossover in HnA 28.5
over 11 years ago
Status "completed" but V12-14 missing?
over 13 years ago
Dropped by tokyo pop?
over 14 years ago
Karin Downloads
over 15 years ago
Is Karin Dead?
over 16 years ago

I liked it until the ending.
by ClumsyTea
September 10th, 2021, 8:39am
Rating: 4.0  / 10.0
Spoiler (mouse over to view)
I read this when I was in middle school. Every time I went to my bookstore I would pick this up. I remember being really disappointed by the ending. Why did they have to erase her memory and tell her she had no family in the end? Her family was very important to her throughout the series, you can’t tell me she will never want to see her sister again.

A good bit inconsistent and anticlimatic.
by asmageddon
January 29th, 2018, 11:29am
Rating: 6.5  / 10.0
To avoid any spoilers, let me just say: The manga was a weird mix of comedy, drama, some serious conflict, romance, with a clumsy innocent protagonist, and save for few of the best scenes, it just failed to set the mood right, and simply didn't reach its maximum potential - there were no crowning moments of any kind, character development was fairly minimal, the resolution of problems far too perfect, and on top of that is an ending that was more bitter than sweet for no good reason.

Additionally, some of the events were paced really awkwardly, and in general while it was fun... I feel like I would be giving it less than 6.5/10 if it wasn't for my nostalgia about the anime.
Was this comment useful?  Yes

Great when younger and not as experienced
by Seregosa
August 6th, 2017, 6:00pm
Rating: 6.0  / 10.0
I remember loving this when I was younger, but just like dragon ball, bleach, naruto, one piece and a lot of other works, I now wouldn't touch it with a ten meter long pole, which I confirmed after reading some again. I wish I could keep enjoying stuff like this even after becoming older and having read and watched a lot more. My standards are now too high and the setting, jokes and everything else is just old to me now. It seems immature and generally has low quality, just like most of that shounen stuff that is so popular(the stuff that is probably only that popular because it's what got people into anime/manga and no experienced reader would ever want to read again or try out if they haven't read it). When you're new to stuff like this, everything feels fresh and great even if it really isn't that good. I might never have bothered to read this at all if I was older when I got into anime/manga/novels.

So... It's probably worth reading anyway, especially if you haven't read and seen thousands and thousands of different novels/manga/anime over the years, if you're younger that's also a bonus, but even if you're not, this story is not that long and will probably be possible to skim through in a few hours to a day.
Was this comment useful?  Yes

ending was pointless
by BoredJester
August 1st, 2016, 3:23am
Rating: N/A
I really enjoyed the series. I read it ages ago but never finished, so I decided to come back.
Anyway, I highly recommend the series, but the ending was just dumb.

Spoiler (mouse over to view)
I see absolutely no reason as to why wiping her memory was beneficial. In what world is not having a family better than having a family that loves you and cares for you? It was so unneeded. She was happy. Karin and Usui would have gotten married and have kids even without the memory wipe, and with Usui, she wouldn't be lonely. She could have been convinced to move out if needed. They could have just visited whenever possible. The memory wipe feels like it was thrown in for no other reason to add a sad element to the ending which is stupid. I'm literally so pissed off with that ending I refuse to read any of the bonus stories unless one of them includes her regaining her memory.

In short, ending completely ruined it for me.

Good, though ultimately kinda bland
by plotrobert
June 8th, 2016, 6:54am
Rating: 7.0  / 10.0
While I didn't completely love this manga, I have to admit that there's some things it does really well. For one I thought the pacing was great, I almost never got bored reading through this story and pretty much kept turning pages until the end. The characters are also well done for the most part, I like most of their designs and everyone is pretty well-rounded. Like others have mentioned Karin is one of those few heroines that cries a lot yet it doesn't seem stupid or forced; after all her life is pretty stressful if you look at it objectively, I would probably cry too.

I think the story is where the series kind of drops the ball. The plot isn't really awful or anything, but it is largely absent throughout, preferring for more slice of life-ish moments for the first 75% of the series or so. The problem really arises near the end, when the plot is solved in an anticlimactic way and then the whole story ends on a pretty down note. Then there's the issue that not much memorable stuff happens. When I think back on the manga and the most memorable scenes, I honestly remember Karin and Usui working in a cafe more than anything. Oh and someone might have gotten blood drained a few times I think. The story just doesn't have enough interesting stuff going on to really stay in the mind, especially if you read other manga regularly.

Spoiler (mouse over to view)
So I hated the ending mostly because I felt like it was being needlessly cruel to Karin. She gets kinda shit on throughout the whole series and then her happy ending with Usui gets marred by losing e memories of her family forever. All for the flimsy reason that "they can't see her during the day"?

This isn't the worst ending ever but I don't think the story benefitted from this melancholy ending ultimately.
Was this comment useful?  Yes

Mediocre
by NoOneSpecial75
January 15th, 2016, 6:48am
Rating: 6.0  / 10.0
As a teenager I adored this series. I followed it faithfully through the Tokyopop releases from the time volume 2 was just barely released, onwards. I even remember the ending making me cry the first time I read it.

However, I went back and read it again for the first time since then and my tastes have definitely changed. I wouldn't go so far as to label the series 'ecchi', but the panty shots and gigantic breasts really made me cringe this time around. The art isn't very fluid either, and poses that are meant to indicate movement are too stiff. Backgrounds are sparse, as are the variety of settings. Karin's house, the school, the restaurant, Kenta's house… we don't see much beyond those 4 locations and what we see of those isn't even drawn in any detail. The story, too, is bland. Kenta has almost no personality to speak of, and Karin isn't very interesting as a character. Karin's family really out-stages the Kenta/Karin love story - especially Elda, Anju and Ren. I stand by those 3 being pretty good characters (they were my favorites the first time around, as well). I also approve of Boogie-kun (I haven't seen anything quite like him in other series).

So… yeah! If you want a supernatural series just for fun and aren't too concerned with quality, give it a shot.

Kinda Nice
by Anonymous
October 25th, 2014, 6:03pm
Rating: 6.0  / 10.0
Some parts just fealt way too sappy for my taste, but the story kept progressing in a good way.
Wish the characters were drawn with more care.
Spoiler (mouse over to view)
starts with a bubbly character that is a vampire but not really. Meets the guy pretty fast. Then had a good progressing story about them falling for each other. I love the little sister. The brothers character was cool but his look didn't for the discription. A lot of sad sappy moments. And a lot of happy sappy moments. I likes the ending more then the whole story to be honest. Wish there was more on what ended up happening with the family after Karin left.
Was this comment useful?  Yes

It was kinda cool
by tipz
July 23rd, 2014, 12:04am
Rating: 6.0  / 10.0
Some parts just fealt way too sappy for my taste, but the story kept progressing in a good way.
Wish the characters were drawn with more care.
Spoiler (mouse over to view)
starts with a bubbly character that is a vampire but not really. Meets the guy pretty fast. Then had a good progressing story about them falling for each other. I love the little sister. The brothers character was cool but his look didn't for the discription. A lot of sad sappy moments. And a lot of happy sappy moments. I likes the ending more then the whole story to be honest. Wish there was more on what ended up happening with the family after Karin left.
Was this comment useful?  Yes

hate it
by IconKumiho
May 16th, 2014, 10:04pm
Rating: 9.0  / 10.0
such a lie. rebirth is when a person die and rebirth again back to earth. how can the daughter be have pass life memory about her mom life. the mom have to be dead to be rebirth. she cannot be rebirth as a daughter but within her family member to be a daughter
Was this comment useful?  Yes