Login to add items to your list, keep track of your progress, and rate series!
Description
From Anime Waves:

A young boy gets saved from drowning by a mermaid but according to mermaid law, if a human sees a mermaid's true form, both are to be executed. The only solution to the problem is for him to marry her and become part of the mermaid family. 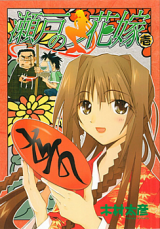 Completely scanlated (in English) by at least one group?
by PKG
October 4th, 2019, 7:12am
Rating: N/A
Half of volume 8 hasn't been translated (10-2019). Don't change the status until someone translates the missing chapters.
Was this comment useful?  Yes

you can't be so unfair
by melquiades
September 4th, 2013, 7:20pm
Rating: N/A
It is impossible not to compare the anime to the manga, and we all are being unfair when we do so...
All of the makers of the anime simply caught the essence of the manga completely, and then animated it. They basically didn't do anything that wasn't done in the manga, it is just that gags are SOOOOOOOO much better when animated

Anime was just so freaking funny that it simply set another standard for me (i'm chuckling remembering it right now xD)
But i would clearly recommend the manga because not all was covered by the anime ...just try to imagine how it would look if you were animating the scenes

good manga
by ckz
December 7th, 2012, 7:11am
Rating: 8.0  / 10.0
manga definitely better. especially the art's funny...
though the story's a little repetitive and no developement but, it's still funny and enjoyable read..
Was this comment useful?  Yes

The anime is better
by KLGChaos
April 17th, 2011, 12:31pm
Rating: N/A
If you have to check this manga out, it's much better to go with the anime. The manga basically has one thing going for it-- abuse of the male character (and his dad) with no character development. After the first couple of chapters, it gets old. Really old. The anime tones down the abuse (though sadly, there's still quite a bit there), but overall, the comedy is better in motion and it has an epic ending not found in the manga with actual development.

You'll most likely find it quite funny at first, as I did, but several chapters in, you'll just be face-palming every chapter as you wait for the lead to catch a break.
Was this comment useful?  Yes

A manga not as good as the anime
by SBX
July 1st, 2009, 3:12am
Rating: 8.8  / 10.0
I may be in the minority here, but oftentimes I prefer the manga to the anime. Seto no Hanayome (hereafter SnH) is an exception to this rule. Perhaps because I discovered the anime first and was spoiled by the infamous "Hohohoho" laugh, but I didn't / haven't gotten the same kind of enjoyment out of the manga.

It's a general harem series, but it's easy to read, and not verging on embarrassing like To-Love-Ru and He Is My Master (is that still on hiatus?). The love "polygon" is pretty clear, and anything that tries to disrupt the axis seems rather forced.

That being said, it's still a good series (an 8.7 isn't particularly shabby), and any moment in which Lunar's father appears is of course priceless. I would mostly recommend the series to those who haven't already seen the cartoon - or they're going to be quite disappointed.
Was this comment useful?  Yes

ze anime was better
by hamburgers
June 28th, 2009, 8:24am
Rating: 8.0  / 10.0
I read this after watching the anime series, and I must say, the animated version is far superior. However, that's not to say that the manga is not worth reading. I'm not a huge fan of the harem genre, but they tend to be quite hilarious, and this one, especially so. I like the idea behind the story; its one that I've never encountered before, and its certainly something that I wouldn't have been able to come up with; +points for being creative.

Other users have commented that there are a lot of 'wacky' situations, but that is what gives this series a unique charm. This is quite possibly the most hilarious series I have ever read; the only other competitor would be..."Sexy Commando Gaiden: Sugoiyo! Masaru-san" (which I highly recommend). The difference between "Seto..." and "Sexy Commando..." is that the former focuses purely on nonsense. Seto no Hanayome is a mix of elements, with a love triangle, school life, and a heavy dose of comedy.

I agree that things start to slow down and become a more typical 'love-triangle shounen manga' (hence, points off), and things can get a bit bumpy, but it was not enough to prevent me from completing the series. As is typical of the harem genre, some rather irritating characters appear later on, one of which I continued to dislike throughout the series, but most of the characters had something to contribute to the story and the lulz.

If you're looking for lulz, and this series doesn't seem to cut it for you....you might just have a problem.
Was this comment useful?  Yes

I can't understand...
by aagcnet
August 16th, 2008, 2:43pm
Rating: N/A
How people can talk bad about something so popular that gets to vol 14+... and compare it to some early work from the same mangaka that only got to vol 4... If you dont like it fine... there are colors for every taste. Just dont make it seem like a waste just because u dont like it.
Was this comment useful?  Yes

Too chaotic....
by flowerzan
June 9th, 2008, 6:44am
Rating: N/A
The story had potential. I really thought it was a good manga to read but it became too repetitive and irritating. The chaos presented at the beginning of the story dragged over and over again that it was no longer humorous, it became annoying.
Was this comment useful?  Yes

A complete disappointment compared to Zushio
by VampireBanana
June 5th, 2008, 10:56am
Rating: N/A
This was a complete disappointment compared to Zushio. (Note: I read this first and Zushio much later on.) The story was actually rather interesting at first given the interesting characters and author's ability to breath life to hilarious situations. However, after a certain while, the plot started to drag as more and more characters showed up. By the 3rd volume or so, everything was so lackluster I gave up completely as it was turning into another typical shounen story.

Note: readers expecting anything close to the mastery and brilliancy of Zushio might be sorely disappointed. This title certainly isn't as funny as his previous and well, it's not as fun either.
Was this comment useful?  Yes