Login to add items to your list, keep track of your progress, and rate series!
Description
A refreshing, unique villainess who's been dropped in the world of a novel, only to overthrow it all! The reason why? She couldn't just stand by and watch the female lead be manipulated by all four shitty male leads. The story of a pragmatic villainess who intends to throw out all the jackasses, the friendly heroine who is equally miffed at said idiots, and a wolf that only yearns for her! 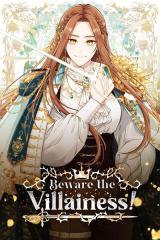 Given this is one of the first few manhwas I've read, it amazed me and I had a ton of laughs. Execution is good. Comedic expressions are so funny. I fell in love with Nine Photon. Yona the Maid is a relatable character.

Since I read this when it was completed, the chapters didn't dull me much in the long run. I just love a badass FL.
Was this comment useful?  Yes

It was super funny
by katiebruvv
March 31st, 2022, 9:18am
Rating: 7.0  / 10.0
Don't get me wrong I loved the whole manhwa from start to finish it was hilarious and had some great characters. I was just a bit bored towards the end and it felt kind of weak. Overall it was an enjoyable ride !
Was this comment useful?  Yes

Unique and hilarious (9/10)
by MorganaReads
March 30th, 2022, 10:15am
Rating: 9.0  / 10.0
This was one of my first Isekai and it really got me into the genre, although few lived up to the standard that this one set. Dialogue is gold, and characters are well developed enough. But I love the realistically strong FL (she's really good but not randomly amazing and a wiz at everything) who doesn't need the ML to save her AND the ML respects that she's got it. Some people will disagree saying he's useless, but I like that not only can she take care of herself, but the switched the roles of the typical damsel in distress/the villainess is in a weak noble lady's body, although the ML does get physically stronger himself. Also, I prefer when the villainess and heroine get along like in this story, and it isn't girl vs girl over a flat ML or the heroine was fake nice and secretly evil the whole time (SIDENOTE: love the point that the author makes about Isekai worlds resembling more Asian culture/dynasties than the Western ones they are supposed to be modeled after.) I do have to agree though that the ending romance felt a little rushed, because her feelings for him were not shown as well to be romantic until the very end

Nice but...
by Cereris
March 20th, 2022, 3:16pm
Rating: 7.5  / 10.0
Cute story.
Usual reincarnation within a fantasy world of fiction (in the sense that she finds herself inside a book), even here a little bit ridden the fashion of seeing the villains redeemed but, in my opinion, it is something that for now there can be.
Also nice to see how the protagonist is quite different from the love story already programmed and that instead a character is inserted not present in the story written by the author.
One thing I was a little sorry about was
Spoiler (mouse over to view)
the ending! Ok they are doing the beauty of 36 Side Story (which then directly add chapters no?).
In my opinion a good manga/manhua/manhwa must not have a hurried ending and then please the readers with side stories. In my opinion must close most, if not all, outstanding issues and then be able to add extra or parallel things (which in theory would be the real use of the side story) to give that extra touch to the plot.
Leaving aside this problem that often happens in many manhua/manhwa is very pleasant.
I recommend reading.
Was this comment useful?  Yes

fucking loved it
by gloriousmangalover
February 15th, 2022, 10:20pm
Rating: 9.0  / 10.0
i want the mmc so bad and the fmc is such a badass omg. love it, total gender bender, so diff from its kind. want another like it!! slightest contention is that the author never addressed that melissa was not from the world like fully. wished there was an arc on it. but otherwise, the plot, character development, everything - unique and beautiful and adorable.

Then the romance with the blue-haired butler starts and he's so lame. He's kind of wimpy and he seems to be meant to be cute, but I don't get the appeal. There's barely any chemistry with the female protagonist, who suddenly starts liking him back out of no where.

This should have just gone the lesbian route. There's genuinely more emotion tied up in the women together than any guy.

I dropped this after the attempt at romance just kept annoying me and the comedy and other interactions weren't enough to maintain my interest.
Was this comment useful?  Yes