Note: The Special translated by Lust subs on 9/11/11 is a crossover special with Dance in the Vampire Bund and Asobi ni Iku yo!
Mina makes a guest appearance in Young Miss Holmes in The Adventure of the Sussex Vampire. The story takes place in the 19th century. Less... 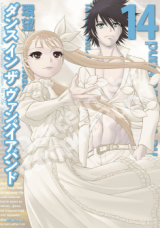 l.
by kari+
May 13th, 2016, 10:17pm
Rating: 9.0  / 10.0
interesting manga. though some confusion on some of the creature power or week development ment on characters or just personality. though still find it interesting to read even if clich. the art is very nice though

Story is immature and cliche
by moredrowsy
October 7th, 2015, 8:55pm
Rating: 5.0  / 10.0
It has all your typical tragedy and love cliche tropes. The most annoying part of this series is the mc, where he always spout "I will protect you at all cost!" but then he can't bring himself to kill his enemies. And as you know, the enemies come back and kill more of the people he love but he still can't kill his enemies because he'll go into a trauma fest when he thinks killing is bad. The story is too immature but if you're into pacifist ideals with vampires plus action scenes where the MC just runs away from his enemies 70% of the time instead of fighting, then this is your ticket to heaven.

Mmm it was okay...
by moonmystery
June 15th, 2014, 12:46am
Rating: 5.0  / 10.0
The story didn't strike me as anything original and groundbreaking, and the art contained a lot of male fan service that I just did not appreciate. Although I often read shounen manga with fan service, I hate it when it's done pointlessly. God, this had hints of all types of fetishes... Pedophilia (lolli), yaoi, big boobs, and etc.

The badass moments were plenty, and the action scenes shown throughout were pretty good too... but it's still below average. I came to really like the main pair due to their quirky relationship, but the plot is so generic that even my love for the main pair could not save this manga.

Finished and Wanting More
by KKurokun
September 4th, 2013, 4:01pm
Rating: 9.5  / 10.0
Just finished the series and loved it from beginning to end. And, the way it ends, I'll be looking forward to continuing adventures in the Bund. [*crosses fingers*] I couldn't get enough of the great artwork. It's so nice to see characters that aren't all built like pre-pubescent children or stick figures. It's also great to see all age groups represented (so tired of manga where adults are conspicuously absent). Loved the vampire-werewolf ally angle; so different from how the relationship between these two groups is portrayed in film/literature. I think it's an interesting, exciting, sexy, funny, touching series and I'm sure I'll be reading it again. If I ever fall into money, it is so going into my library. I'm just glad my library system has the books for lending. I'm also hoping the anime will be re-made a al FMA: Brotherhood, to follow the manga with the actual ending.
Was this comment useful?  Yes

On another note, the scanned version from v12 onward is atrocious. Translation is frankly terrible. The need for new manga groups to pick this up and redone with deserved quality is still there.
Was this comment useful?  Yes

I enjoy it
by htcheng
June 27th, 2013, 4:31pm
Rating: N/A
I hope end of Part 1 is not is not the final end and we will see part 2 soon. I can't say this is like manga of the century or something like that. It just a very enjoyable manga that I had read, I can't even pinpoint why I enjoy it so much I just do, maybe the story is just very interesting.
Was this comment useful?  Yes

Too much fanservice...
by Glad-kun
June 13th, 2013, 9:17am
Rating: 8.0  / 10.0
to take it seriously. And this fanservice is everywhere and all over the place. Nudity at every opportunity, loli, shota, yaoi.... bestial yaoi.
The writing is kind of off sometimes. Werewolves that prefer to fight in human form... why?
The manga is truly enjoyable, but I regret reading it because it ends with "End of Part I" and more questions than answers. Years until the ending. I don't know if I will be interested then.
Was this comment useful?  Yes

My favorite Vampire Manga
by fallton13
May 8th, 2012, 12:21am
Rating: N/A
I originally had watched the anime and loved it. Then I read the manga and found the story went further. I started wondering after ch.48 was scanlated, how long before more chaps come out. Then I found that it was not only licensed already, but the licensed version was already ahead of the scanlations. I have up to vol.11 and am looking forward to vol.12 next month. The story keeps growing but you can see the end drawing closer finally.
Was this comment useful?  Yes

Vampire Fest
by McCasper
November 13th, 2011, 1:45am
Rating: 7.0  / 10.0
This series seems dedicated to giving you as much vampire entertainment as you can possibly handle (with some werewolves on the side). If this were a movie, it would be one of the summer blockbusters that doesn't win a single award but entertains millions of people all the same. Whenever I'm itching for vampires I catch up with this series and never left unsatisfied. (insert lame pun here.)

However, it might leave some to be desired for those looking for a more philosophical work and if you're tired of vampires you might want to leave this series be for a a while. You can also see how this series goes out of its way to sexually appeal to both genders and how some plot twists are simply thrown in for shock appeal. Basically, it's what you would expect from this kind of series.
Was this comment useful?  Yes

Soft Tragedy is the name of the game
by Kaosu
October 16th, 2011, 4:57am
Rating: N/A
I really like this series. It has a loli without putting emphasis on it, it has vampires and werewolves which if done in a good way, is fine by my book. Good action, interesting premise, art is good and the flow of story is quick enough. However, what really burns my soul is constant shitting that one of the main characters goes through. Some are dumb reasons, some are beyond his control. All of it becomes agonizing throughout the series.

The real subtext beyond all of the backstories, constant stream of tragic events, betrayals, and general dark setting is one of bonds that while at times hard to maintain due to certain circumstances, are unbreakable even if it appears frail. Having read up to the latest scanlations, its apparent that the story, no matter how tragic (and I feel pointless after so much), is only there to put emphasis on this very bond between two beings.

Theres a few details that slowly builds up the state of the world and the politics behind the ongoing story; however do not let that deceive as the main focus of the story. Its clear after a while that theres a common theme that drives at the story and usually it always involves the same two characters (and their reactions to it) as the basis formed to build up events.
Was this comment useful?  Yes