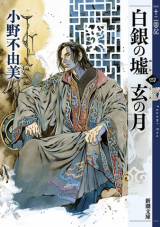 Note: You must be logged in to update information on this page.
Forum Posts Click to view the forum
Did the Tai plotline ever get resolved?
about 1 year ago
Dead?
over 11 years ago
Tokyopop cutting parts of the novel?
over 11 years ago

Teaches a lot
by Meilee123
August 4th, 2017, 4:03pm
Rating: 10.0  / 10.0
I only watched the anime so Ill comment on the story.
The best thing about this show was that the characters were very human. They highlighted human characteristics such as cowardice, ignorance, self-pity, kindness and just about everything else humanly. It highlighted politics and its limits. It gave life lessons that are oh so relatable. And it wasnt afraid to show death, which is something that makes the life lesson parts so real. It was very well written with interconnected events that led into the story very well. Even side characters are relatable because their stories were well developed; everyone spouted wisdom from their backstories. But you need a lot of patience to dwelve into the stories of a lot of side characters. The experience is similar to asking a real person their story and patiently waiting for them to tell you the whole thing.

Props to this show for not being romance based. Although I admit that would have been a sure way to make the episodes more exciting, it would have distracted from the virtuous intentions of the story.

"Trust stems not from kindness but faith."

"Ignorance is not an excuse."

"I've always blamed the world for not making me feel as though I belonged. I blamed my parents, my friends, my school, and even my hair for my grievances. But in truth, I didn't love myself. How can someone else respect and love me when I failed to acknowledge myself? I was an incomplete person, and that was why I only had shallow relationships my whole life."

"When your voice is silenced and you willingly endure the consequences, you become a coward. I've always found small flowers fascinating, and I painted these beautiful daisies while on a school trip. But my teacher told me she would be pleased if I had drawn the mountains we were viewing instead, so I ended up covering the daisies with paintings of the mountains. I never expressed myself to others since I didn't want to be hated. I wanted to look good. Now I know I was wrong."

This was unexpectedly exciting, and I ended up watching all 45 episodes in one day! The story does not contain romance as a plot, and there is heavy focus on politics and the world that the author created.

Even though there is a large cast of characters, I managed to feel sympathy for many of them. My only critique would be the way in which certain characters were portrayed-- obsessed, blind, and narrow-minded. They all got good character exposure and development, however, so their previous immaturity was only temporary.

I recommend this a lot! You can watch it on Youtube or read the novel in english!

Not My Thing
by NoOneSpecial75
April 9th, 2015, 5:07pm
Rating: 4.0  / 10.0
I read the first 2 novels based on a glowing recommendation from a friend, but frankly I found them boring and a chore to get through. They are completely devoid of any humor or romance. Just straight up action/adventure. So if that's your cup of tea, you've come to the right place.
Was this comment useful?  Yes

Mandatory reading
by DuckTales
December 31st, 2014, 6:27am
Rating: 10.0  / 10.0
Firstly, Eugene Woodbury is a great translator and his website has a list of translated versions of most books from The Twelve Kingdoms series. He also points to places wherein you can find information and books that are not available on his website. A huge thanks to him!

If you have watched the anime, I do not need to tell you why you should read these books. The books go well beyond the anime and detail aspects not covered by the TV series.

However, if you are new to this series, you are in for a treat.

An ordinary girl finds herself in a fantasy world. The fantasy world, its rules, the politics are clearly and comprehensively explained in a reasonable manner. The story's foundation is well-laid and ground rules are clearly established and the plot is built upon it in a very careful manner.

The first story details how the young girl adapts herself to this fantasy world and becomes a better and capable individual. Subsequent stories discuss circumstances of other characters, their plights and struggles towards success.

Topics such as ethics, morals and how they conflict with accomplishing personal goals, concepts of statesmanship and politics, rule of law, justice and mercy etc that are associated with governance are discussed as part of the storyline. This is a brilliant 'coming of age' story that has plenty of character growth. The storyline keeps you excited and poised and does not disappoint. You will be glad to give this a try!

Full of Lessons
by Paraph
August 1st, 2013, 6:39pm
Rating: N/A
I read the translated novel online and the reading experience wasn't great but don't let that stop you from reading this and watching the Anime.

In the anime the beginning is off putting since the protagonist is irritatingly meek, but give it a few episodes and the development will be mind blowing. The story takes place in a fantasized, mythical world, that is throughly crafted. The events in this story mainly revolve around politics. The heroine, dragged into the worlds politics, is forced to realize her faults and must seek out change. I've no doubt that you'd be rooting for her when you are halfway through.

Sometimes the author focuses too much on explaining the politics and she ends up deviating from the main story. On the bright side, this shows how well structured the world works; there is balance and reason. There is no overpowered individual.

This story's greatest quality comes the authors ability to communicate the lessons the characters have. The value of the protagonist's conflicts are so clear that you cannot leave the story without gaining some insight on how to be a better individual yourself.

AWESOME
by nadl-chan
February 24th, 2013, 4:36am
Rating: 10.0  / 10.0
Twelve Kingdoms is one of my favourite novels.The story is great, the characters are awesome and I just love the setting!
The translations from Tokyopop are pretty poor, but don`t lose hope, because some awesome persons translated it! You can find the website where you can read and download the novel in english easily on the internet (!google!).
If you have problems finding it just message me and I send you the link.

Have fun reading it!
Was this comment useful?  Yes

Nobody translating this amazing manga??
by elderamy
November 23rd, 2011, 8:57am
Rating: 10.0  / 10.0
I've seen the Anime and its very good. Even if some stuff has an odd pacing and feels out of place... Then read the novel and all made perfect sense and wished they followed it more close on the anime. Still the Anime got a more EPIC feeling to it.

Then discovered that there is a manga out there and nobody is translating it.... which is surprising considering ho popular and amazing Juuni Kokki is... Plus so many awefull manga gets translated and double/triple translated everyday...

Anw, please try to read this manga or the novel! it is amazing and one of the best out there.

The story is great and the characters are very well thought. The author has developed her own world based on several chinese/japanese mythologies and the plot works really well. There are numerous sidestories and developments between characters and plenty to add up between all the countries. One of the best developed fiction settings/universes I've ever seen (like lotr, star wars, star trek, etc).
Was this comment useful?  Yes