Login to add items to your list, keep track of your progress, and rate series!
Description
IS (Pronounced Aiesu in Japanese) is not your everyday manga. This manga strictly deals with cases of intersexuality.
This manga deals with issues concerning intersexual people. The pain they go through, the troubles they confront, and ultimately their inability to reproduce and even find a partner who will accept them as they are.
The series is consisted of cases, each dealing with different people - although some cases are much longer and more dramatic than others.
The series eventually ends up being about Haru, an intersex child, in a touching coming-of-age story.

Won the Kodansha Manga A... More...
IS (Pronounced Aiesu in Japanese) is not your everyday manga. This manga strictly deals with cases of intersexuality.
This manga deals with issues concerning intersexual people. The pain they go through, the troubles they confront, and ultimately their inability to reproduce and even find a partner who will accept them as they are.
The series is consisted of cases, each dealing with different people - although some cases are much longer and more dramatic than others.
The series eventually ends up being about Haru, an intersex child, in a touching coming-of-age story. 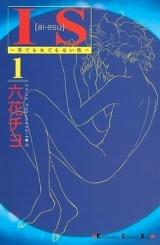 Note: You must be logged in to update information on this page.
Forum Posts Click to view the forum
IS Gets Drama
over 10 years ago
Rebirth of Aiesu! Scanlating Again.
over 11 years ago
Scanlating
over 13 years ago

For example, despite this manga's message of people being different and that being okay, it's so painfully heteronormative and supports rigid gender roles right until the end.
Spoiler (mouse over to view)
That "girl things, boy things and special intersex people who can do/like both and bring everything together" with Nozomi left me an awful aftertaste. Was too hard to include one girl who liked soccer or a boy who wasn't interested in playing the same things as the other boys?

The portrait of young people with disabilities was also iffy.

In spite of that, IS has its good moments, of course, and that's what kept me reading until the end, but I've mixed feelings about it.

Just a bunch of depressing stories about people with shitty self-esteem because of their genitals. I found it hilarious that the solution to the "Oh no! I'm an intersex!" conundrum was to become a lecturer on intersex about 50% of the time.
Was this comment useful?  Yes

Wonderful Subject, BUT-
by blackluna
August 8th, 2015, 3:38pm
Rating: 5.3  / 10.0
The subject is wonderful, and I am glad that someone decided to breach the topic. There are issues though. The information given is repetitive and incomplete: it would be easily possible to give some more depth given the scope of the manga. IS's understanding of intersex conditions is poor and often inaccurate, both on the grounds of sex and that of gender (if intersex individuals are born genderless then all people are, which isn't necessarily the case either, even according to the manga). Also, all intersex individuals are represented as sterile, which happens not to be the case: it is largely dependent on the particular condition of the individual, the probability being determined by the factors that make them intersex (see Wikipedia for starters). This is relevant because the manga has a huge focus on fertility, completely ignoring other facets (adoption, wanting children in the first place, etc.) and assuming that having children is the proper course of events for all couples. Then there is the assumption that all XX females and XY males are fertile, heterosexual, and cisgender (or at least are supposed to be): whilst obviously the reality is far more complex. (Side note: in humans, conditions where the affected individual has both male and female gonads, at least one of these will not function. This is relevant in the last story...) Going by the manga's logic, a woman who had a hysterectomy is no longer female, or is she still female because she was born with all the parts?-- it's ridiculous either way. The views IS represents on these issues is backward, and it is not hard to find works which have better views on sexuality and fertility, although Haru's situation of being so completely between male and female gender-wise is highly unusual in Far Eastern works. Furthermore, the LGBT community is completely passed over and ignored, and even cast in a slightly negative light when mentioned in passing. While it tries to deepen understanding of gender issues, "exploring" them while passing over a group that has brought much attention to these matters since the 1980's is odd and never supported or justified in any way. As a story it is well done and the art is suitable (it even avoids many cliché pits), thus the rating, however, as an ambisexual, I can't help but be perturbed by this.

Wrooooooooonnng.
by Baniita
March 12th, 2015, 12:05pm
Rating: 1.0  / 10.0
I don't know if it was a constant scanlation mistake or the author's mistake, but they didn't even seem to understand the difference between gender identity and sex. "Intersex people are born genderless"? WROOONG. Agender, genderfluid, gender nonconforming, gender neutral, non-binary, etc, are all gender identities. They mean to say born being of neither female or male sex. Jeez. Heck, the first girl exhibits mostly female traits and express desire to be female. Thus, her gender is female (if that's how she feels). Also, the "I don't want to trick him" was irritating if this were written by a cis person.

It starts off in a episodic case-by-case format but once the main story of Haru is introduced, the real magic happens. Though the description sounds heavy (and a little depressing) it's nothing short of bright and lovely. It has its sad moments, but they always end with a hopeful resolve. The main message is consistant and always explained well. The character growth is heart warming, reflective and relatable in such a way, it makes you feel like anyone has the ability to learn and improve from the complications of life. And in all, it has a wide range of feel-good qualities that are both informative and inspiring.

The last thing I want to do is run on with flowery praise, but it is a story of honorable mention. It is a breath of fresh air and a joy to read.

Sidenote: I also found myself loving the mangaka's personal side stories. She is hilarious ^O^ (plus a couple side characters - Julia and Daimon <3)

Definitely worth reading
by Suxinn
April 27th, 2013, 9:13pm
Rating: 9.5  / 10.0
Never has a manga made me cry more than IS has. It does an incredibly good job at what it sets out to do: raising more awareness for intersexuality (and, consequently, more desire to learn about intersexuality).

While it's true that the story is a bit simplistic and some parts work out a little too well... but, for its topic, it really is doing the best it can. And rather than drama for drama's sake, it really uses the drama to its advantage, and every time something happens, the characters grow and develop and learn from their mistakes.

The whole thing is just so intensely touching, really, and while it is definitely not a perfect piece of work, even its imperfections are beautiful to see.
Was this comment useful?  Yes

illumination
by Acerola
September 2nd, 2012, 12:51am
Rating: 10.0  / 10.0
When I was 25, there was a person in love with my boyfriend. This newly He told me he was in love with him. He was formerly a girl. I was never able to understand why they became male (operation) and fall in love with a man.

This manga gave me a little bit of understanding. Thanks. I will try to be more open minded in the future.

Nice.
by lialah
August 17th, 2011, 12:11am
Rating: N/A
I don't often see manga with this kind of theme taken even remotely seriously, which is why I'm very glad I came accross this. It deals with serious issues and there's enough romance to satisfy the typical josei/shoujo readers, without depicting the romance as abhorrently cliche.The struggles the characters go through, while slightly overdramatic, are realistic and not limited to the people with intersex characteristics. Both the main characters deal, in their own way, with a society that looks fown on people who don't fit into the neat box of 'male' and 'female'. The secondary characters are well thought out and go through their own struggles.

I only have a few gripes with this manga, which I'm going to agree somewhat with KoariNite. The issue of surgery for people of intersex, I'm sure, has to be far more complicated than that. From what the mangaka seems to be implying, for a person to have gender assignment surgery would leave their personality irrevocably altered into the mindset of the 'gender' they decide to become. It seemed to be especially implied in the case of Haru. Now, I'm not denying that there are differences between sex. Still, at least for most people, I'm in serious doubt that an individual who has been wearing shorts and t-shirt their whole life, and are into sports, are going to suddenly have a total 180 in personality, and suddenly decide they like make-up, fashion and dresses instead.

There's only this little issue though, and may only be me who sees it that way. Overall, I'd say defiantely read it, you don't often see the issue of intersex taken very seriously in manga.

Good Topic But...
by KaoriNite
June 14th, 2011, 8:48am
Rating: N/A
in the beginning i was really into it. the story is unique and it actually has a good message about raising awareness of IS and promoting understanding and acceptance. however, the stories were repetitive. also, i just felt like the story was overwhelmed by the message. it was too preachy. and, i felt like it looked down on people with IS who choose to get surgery. it kept saying we need to accept that there is a third sex and the stories were all about characters learning to accept themselves and then teaching others about acceptance, which i agree is a good thing but, at the same time, the story makes it seem like intersex people should never get gender reassignment surgery and just figure out how to live being intersex. i just think the issue is more complicated than that

Moving, if Uninformed
by HoshiSama
August 17th, 2010, 9:42pm
Rating: 7.5  / 10.0
This manga could be a good introductory tool to the idea of intersexuality but it is not really scientifically accurate and fails to understand it's own subject matter. The author implies that intersexuality (which encompasses over 200 different conditions) always causes infertility, which is simply not true. If you really want to learn about intersexuality then look elsewhere. I also take issue with the complete lack of LGBTQ understanding. For a manga about people who do not fit the biological gender-binary it is very gender and hetero-normative. There also seems to be a lack of understanding that you can have a fulfilling sex-life without penetrative sex. It's a good story, but ultimately not one I think the author really had the understanding to write.