Login to add items to your list, keep track of your progress, and rate series!
Description
Hikari Kohinata is a cheerful 15 year-old girl who lives near the ocean and she spends much of her time diving as a result. On her first day of high school, she meets a teacher who also likes scuba diving. There's also a 16 year-old classmate, Futaba Ooki, who gets dragged along in Hikari's maelstrom as soon as they meet at school. 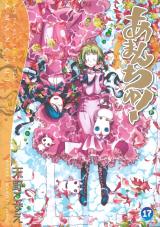 Note: You must be logged in to update information on this page.
Forum Posts Click to view the forum
Amanchu! Gets Summer 2016 TV Anime
over 6 years ago
Favorite Character?
over 7 years ago

Sadly no Aria
by residentgrigo
December 29th, 2014, 5:53am
Rating: 6.0  / 10.0
I read Amanchu! for 6 Volumes and had fun at first but the midnight oil finally ran out and the series is now on Vol.10 in Japan. The 2 leads have character but none else do and that is an undeniable problem while a point or purpose is now impossible to be seen too. A random Peter Pan chapter and then another about how Hikari forgot to put on her bikini top and then had to hide her breasts for one chapter back to back made me realize that i was only enjoying the well done art and nothing else as the interesting diving elements mostly went. I further have a feeling that the author lost the plot because the new chapters were not lining up with what came before.
I thus dropped the manga as i don´t read moeblob appreciation. Go for her main work instead or Yokohama Kaidashi Kikou / Yotsubato! (a 8,5/10 for both) which all kept the Mono no Aware magic going all the way. All in all not a bad manga but now sadly a boring and pointless one. Let´s see how Kozue´s next work will be as she is talented.

Unrated
by Hell_Clues
August 18th, 2011, 3:53pm
Rating: N/A
Upto volume 2. I think there is a king of this type of manga and this one isn't it. The first volume had an interview with some good advice in it.

This manga is just one of those appreciate stuff with an excitable (ummm how do I describe her, oh yeah yotsuba) type of girl. It doesn't fail in this. If you want to learn some basics on scuba diving, this manga seems to have it. I wouldn't mind trying scuba diving but it seemed needless the way the info was given, and by that I mean boring(just the information bit, not the entire story). Though it made sense in the story and one character is learning.

Negatives: a little false gay with how close the girls are all the time and so quickly. Often closer than humans usually are for no reason. Not a single male in the first volume with any meaningful interaction or in the club room( isn't there usually a thing about member limit). But it's early.

If I were to rate this right now it'd only be somewhere around 6 or 7 based on the way the story was presented. By that I mean that it seems average good so far.

update: Some of what I mention gets resolved in V.2 which makes it seem like volume one could be trimmed down by half and part of volume 2 could have been added. Reminds me of when people talk about decompressed comics. Though in this case it's more that the structure didn't seem thought out to realize what was important early.

great!!!
by gopackgo
February 1st, 2011, 11:43pm
Rating: 10.0  / 10.0
Very laid back manga thats easy to read. Amanchu is a simple slice of life story with a small shoujo-ai feel to it. If you want to read a funny manga without having to worry about the plot then Amanchu! is perfect for you.

It's so simple, so soothing and so satisfying... I can never completely describe the warm, mushy feeling that I find myself in when I read Amanchu (and even Aria)... I always end up smiling no matter how horrible a day I had at work.
It's "Pikari Magic" I guess

I find this a great read
by LightReborn
February 27th, 2010, 5:36pm
Rating: 10.0  / 10.0
I really enjoy the unique protagonists. They all have a unique way of acting or looking at things. (except for dotty, she's pretty normal... but still!) I particularly enjoy the events that Hikari stirs up.

The manga's a pretty laid back story. plenty happens each page but there isn't a lot to digest... I think i said that right... to make an odd comparison, it's a quick-release pill of a plot. Plenty of plot, you just get it into your system faster than other ones.

I'll add more if it strikes my fancy, or if I realize i missed something.
Was this comment useful?  Yes

More of Amano's Genius
by Crenshinibon
May 22nd, 2009, 5:54am
Rating: 8.1  / 10.0
Amano, is, again, one of the authors I give a lot of credit to. Although I'm sure most are familiar with my opinion by now, Aria was a fantastic piece of work that I hold in a very high regard and would be willing to reread any number of times. So far Amanchu! is a weaker story, but I daresay that could be because of my own personal bias. Aria is fundamentally a story about the small beauty in the ordinary, Amanchu! instead choosing to focus on the idea of even the ordinary being fun (though, of course, Aria did touch on it).

In any case, Amanchu! is another excellent escapist work. It's lackadaisical, soothing, and altogether cathartic. I imagine that I will update this review in the future, but for now it's enough to say that it's a series worth following from the start- digesting it slowly and savoring it will only enhance an already good experience.

..what an odd girl

good manga so far though, i'll come back and give my opinion when i finish all the released chapters
Was this comment useful?  Yes

Very interesting characters so far, and the progress is amusing.
*looks forwards for more*
Was this comment useful?  Yes