Login to add items to your list, keep track of your progress, and rate series!
Description
As a child Sakura Mamiya mysteriously disappeared in the woods behind her grandma's home. She returned whole and healthy, but since then she has had the power to see ghosts. Now a teenager, she just wishes the ghosts would leave her alone! At school, the desk next to Sakura’s has been empty since the start of the school year, then one day her always-absent classmate shows up, and he's far more than what he seems! 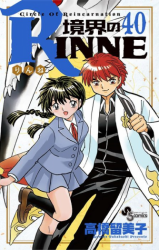 Note: You must be logged in to update information on this page.
Forum Posts Click to view the forum
RIN-NE Ends in 3 Chapters
over 5 years ago
Kyokai no Rinne Thoughts
over 9 years ago
What happend to the translation groups?
over 13 years ago

Dropped twice
by PZcolo
November 7th, 2018, 9:58pm
Rating: 3.0  / 10.0
Just what Celianna says plus I dislike the level of stupidity used to make even the most tragic moments into no more than a joke. This is nothing new for Rumiko but after 40ch it's been anything but that and considering I just find that humor irritating I can no longer keep reading, the mini-arc about his father and debts was just too much.
Tried reading this twice and I'm pretty sure there won't be a third.

Great series
by goosebump
June 18th, 2016, 11:55pm
Rating: 10.0  / 10.0
Even though people complain about the characters being boring, I personally find the main character to be sweet and the girl actually not annoying. The main people in this series are actually nice and I enjoy reading a manga in which characters care about each other. Though it's not as funny as 1/2 Ranma, it's still quite funny and makes me laugh often. Overall, I really like it.

Something different from Takahashi Rumiko
by LightOrNot
September 17th, 2015, 5:15pm
Rating: N/A
I very much like that the heroine in this manga is so "low-tension", she very much goes with the flow. I would liken her to Sakata Gintoki from Gintama but without the sometimes high-tension tsukkomi of Gintama.
Was this comment useful?  Yes

Rumiko shows she is long past her prime
by great_k
March 10th, 2015, 4:58am
Rating: 6.5  / 10.0
Rumiko Takashi has been one of the main stays in the manga world since the late 70's.
One of the best mangakas of the 80s with Ranma and my favorite manga Maison Ikkoku.
It would be ridiculous for her to still be producing industry dominating manga almost 40 years after her debut. Nobody is on top in any field for that long.

Personally I think that her manga peaked in the 80's. I stopped enjoying her series in 90s, after about the 1st 1/3 of Ranma where the series started to deviate from the original formula.
I disliked the shounen cliches of Inuyasha and now we have this series.

While using an episodic format like Ranma, the characters aren't endearing, the humor isn't as amusing, the action is not as good as the early Ranma battles and the MC does not have the versatility that the split Ranma does.
One thing that is surprising is how balanced Sakura's personality is given Rumiko's own admittance that she prefers her characters to be flawed. A lot of people have commented how this makes her boring and I tend to agree given the context of this series.

Kyoukai no Rinne is not a bad series and certainly not an unreadable one, but it does very little to distinguish itself on the market.
Was this comment useful?  Yes

I like this series
by Kitty Phuong
August 17th, 2014, 6:06pm
Rating: 9.0  / 10.0
I love Takahashi Rumiko. I love the art. I love the characters. I love slice of life manga. I think this manga series gets better and better.
P/s: English is just foreign language in my country, so I don't know whether my grammar is right or wrong...
Was this comment useful?  Yes

Slice of life comedy
by kronpas
December 5th, 2013, 9:51am
Rating: 8.0  / 10.0
This manga isnt meant to be read all in one go. You read a couple of chapters once, then forget it, so dont expect much character development, story progression etc. Honestly I dont think anyone claimed him/herself a fan of Rumiko Takahashi to be complaining about this manga, as its basically the same as her previous works, from story narration to art to character design and settings.

In short, it is another Ranma 1/2 (although not as memorable).

well, I like Urusei Yatsura, Ranma and Inuyasha but not Rin-ne. (I feel something wrong when I read Rin-ne)
Was this comment useful?  Yes

I was disappointed to see the art style had not been upgraded since InuYasha. It's like the mangaka is still stuck in the art style of the 80's. So the whole manga has a very 'dated' kind of look to it. But, I can tolerate this.

RIN-NE is about a boy named Rinne who is a Shinigami, a sort of death god who exorcises souls. He's dead-poor, and lives in the real world where he has to pay real money. In order to get out of his debt, he tries to be as cheap as possible when exorcising a ghost (many contraptions he chooses to use cost a lot of Yen apparently), and asks for money in return when someone requests he exorcises a ghost.

Then there's the supposedly main character, Sakura, who is nothing but a background character. She's a normal student, and she can see ghosts, this means she can see Rinne as well. She basically follows him around after this, sometimes helping in hearing sob stories from ghosts, but not doing much else.

RIN-NE is surprisingly dull. It it not a plot driven manga, definitely not. This is a 'monster-of-the-week' manga with no main plot. At least InuYasha had a main plot, aside from their random 'monster-of-the-week' battles. Anyways, you'll see some ghost bothering a person. They ask Rinne for help. Rinne hears the ghost's sob story. Rinne needs to pay for some ghost trap thing to help get the ghost to leave. Rinne tries to be cheap about it. Sakura is there too, not doing much. The random person that was bothered has an epiphany and the ghost leaves. Rinne, Sakura and all the other random characters have 0 character development.

That's basically what happens every 2 or 3 chapters. After 83 chapters, there still is no main plot. There was however, a few chapters that explained how Rinne got into debt, but this has not become a 'main plot'. It was sort of pushed to the side to be forgotten.

Oh, and did I mention there's some romance in there as well? Or at least, I think. Rinne definitely likes Sakura after a while, but Sakura, being the background character that she is, either ignores it blissfully, or is really that dense.

Rinne isn't a half-bad character, but not much to brag about.Sure his attitude towards money is fun for a while, but at least make some new jokes with it. Sakura really hurts the series. She's dull, barely there, offers nothing new, and remains to be a background character for most of the time. Gee Rumiko, were you so hung-up on writing tsunderes (Ranma 1/2 and InuYasha) that you had no clue how to write another girl personality? Well, it definitely shows. I have no problems with a more laid-back girl, but come on - she's barely even present! And if she says something, it's just so dull and uninspiring, any character could have said it.

If you liked Ranma and InuYasha, and think this manga will be great too, because it was made by the same mangaka - then please turn back now. RIN-NE is nothing like those two. It's like the mangaka lost her motivation to make a good series. RIN-NE is barely entertainment, and I like plotless mangas! Provided they have some character development that provides the continuity. RIN-NE has no character development. It's sad.
Was this comment useful?  Yes

No story
by Usara
October 12th, 2010, 1:15am
Rating: N/A
Art's great but no real development. It's like reading ah my goddess until you finally hit the storyline in the 20th volume or reading detective conan and getting little main storyline plots every 15 chapters or so.
Was this comment useful?  Yes

Is all the momentum because of Rumiko?
by amytan2134
January 18th, 2010, 3:54am
Rating: 7.5  / 10.0
Rumiko Takahashi is no doubt one of the best manga-ka. She's had so many hits and stories loved by so many people. So Rinne makes me wonder if all the great comments are due to Rumiko and not so much due to the actual series. As of ch 35, I think Rinne is only average - not bad but not excellent. The intended jokes has fallen flat to me and if it wasn't written by Rumiko I wouldn't have read this far. It does have potential so I'll continue to read it and hope it gets better.

Getting better. I like the addition of Ageha. Some people don't seem to like the main character(s) but I like the two main characters (especially Sakura). It's good to see a character not so wacky and resort to violence so fast. But the jokes I still find lame...