Login to add items to your list, keep track of your progress, and rate series!
Description
From Tokyopop:
Aliens have landed on Earth and are now a normal part of society. These beautiful beings have been given the name "DearS" and are trusted and welcomed by most humans. In order for the "DearS" to learn Earth's customs, they are sent to random high schools to "home-stay." When Takeya helps a DearS in his school, she calls him "Master." Thus begins the humorous life of Takeya and his sexy alien follower, Ren, who tries to figure out the wacky customs of this place called Earth! 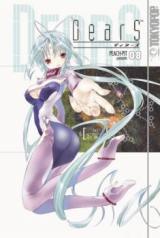 Note: You must be logged in to update information on this page.
Forum Posts Click to view the forum
anime/manga
over 13 years ago
Resurrected [03/07/07]
over 15 years ago

Would have been great if not for...
by Jandalman
July 19th, 2011, 5:12am
Rating: 4.0  / 10.0
Takeya. Just Takeya. He's basically the king of all jerks in the universe. Seriously never in the entire series did I cheer for him to be together with Ren. She and all the other girls who like him are WAY too good for him. If I could decide I'd have paired him up with some 7 foot tall neanderthal named Bubba in some back water prison. If you somehow have the power to remove his presence from the manga and replace him with a protagonist of your own making that is less jerkass more "actually has a heart" then perhaps you would find this series more enjoyable.
Was this comment useful?  Yes

The main flaw is a loathsome protagonist. Seriously by end of the tale I wanted to see Takeya curb stomped in the worst way.
The point of these kind of stories is for the reader to live vicariously through the protagonist. Flawed but human with an inner nobility or strength is the usual template.
But Takeya is narcissistic, full of self-pity, he lashes out violently over minor slights, lacks altruism and indulges in baseless conspiracy theories. Even emo's, auspies, and borderline psychopaths would be loathe to identify with the character.

It's too bad; If they wouldn't have made the lead such a self absorbed twit, I would have liked it more.

nice manga
by dremondtanic
October 24th, 2010, 1:49pm
Rating: 10.0  / 10.0
i just finsh this manga in 2 days and i have to say, it was pretty good. Not too exagerated in the ichiness, and fun to ready. There is not any real plot in the story until the last 15 chapter, and wwell for this type of manga, it had a pretty good end (not the best but still better than many others).

OF course at the end didnt make much sensce, but there is no reason y a sci-fi or fantasy or i should say any type of manga should make much sense, if not what the reason to read those type of manga if it not exagerated. just like cartoon or anime need to exagerate a human figure, it shoudl be the same for a manga.

and for last, i dont know why some people compare it with chobbits, this manga has nothing to do with except that some of the character look very cute, and that is to be axpected, have not interst in ugly character. and anyway mostly all anime or manga always have either children or teenager or most likely not older than 23 (but still look like teenagers) people as the main character, it to be expected for a manga.


anyway i will definitely recomend this manga to read, and give it a 10 because i like it and not because some place doesnt make scientific sense
Was this comment useful?  Yes

good read
by Spearsmen620
November 25th, 2009, 3:01pm
Rating: 10.0  / 10.0
i read this entire series in two days, in the end i was moved to tears, i utterly HATE Takeya's dad so much!! this manga is really funny at points and 'eh' at others but this manga is really good if you can get over the ecchi-ness. no full frontal nudity but it can get crazy at times, kinda reminds me of Chobits manga, sort of but this time the girl is emotional not like chi who always had a poker face. Anyways, this manga is and always will be one i recommend.


What is this BONUS volume?

Hm
by mogiks
July 20th, 2009, 7:25am
Rating: 8.0  / 10.0
It seems pretty clichéd, how many times have you seen manga where some hot girl comes out of nowhere (an alien or robot or something) and starts living with a guy? But this manga has a few twists and interesting things in later volumes that make it stand out.

As per usual, PEACH-PIT's art is really nice. I wasn't that fond of the ecchi element but over the volumes it became less about huge breasts and more about the characters and their relationships. It actually became quite deep although the very very end was pretty stupid. The comedy was fairly funny, and I liked all the characters. It's very difficult to have such a large cast and pull it off like that, it was done very well. If you can get over the ecchi thing, I don't think this is a bad manga for girls to read as well. For the deeper parts, some sad, and some funny stuff, I give this manga an 8, it's definitely worth trying.
Was this comment useful?  Yes

Disappointing in the end
by splight
May 16th, 2009, 11:09am
Rating: 6.0  / 10.0
Warning, spoilers will follow.
Plot is a total mess. DearS started as obviously artificial species made with genetic engineering by their previous owners. It continues along the anime quite smoothly but and after that author tried his best to be "original". He made them in "parasites"! But how can that be "parasites", if:
1) They obviously have no space traveling technology. Ship, in which they traveled, was not build by them.
2) If, by any chance, they have space traveling technology, they can easily fix their replication problems, so do not need hosts at all.
3) If they not need a hosts for replication, then they: A) Plain old space locust with you will find in half sci-fi (not harem or ecchi through) there is and wouldn’t be cute slaves; B) Or just plainly crazy.
4) IO had threatened humankind by neutron bomb. Question: A) Where did she found neutron bomb? B) To destroy life without destroying planet itself you need aprox 6-8 neutron bombs at high orbit to detonate together, because, well, neutrons can’t pass trough Earth all the way from one side to another. Neutron doesn’t kill instantly, humankind will have 20 minutes to revenge at least, if it detonate all their nuclear weapons, no life will be possible on Earth for 500-2000 years, what was that nonsense about reverting Earth nature to its primitive state? C) Even if will destroy humans, what next, where did she get from that? Obviously she wouldn't be able to save their ship, because if is not alive, so cannot be protected by "shifting life energy". Don't DearS will die out in few generations due to birth problems even if they will have Gate for a while?
5) Anyway, DearS as Trojan horse parasites have very little changes to survive and kill even after 2-3 changes of hosts.
6) And why they look like human? One coincidence can be forgiven, but will they look equally cute to some, for example, intelligent squid?
Well, story was believable until that omission with “parasites”.

Very enjoyable.
by SomePerson
April 23rd, 2009, 7:50pm
Rating: 10.0  / 10.0
Read the whole series in a few days, liked it a lot. It was generally a light-hearted and fun series but it also had its dark and serious parts. A bit ecchi, but not too extreme, and I just loved it!
Was this comment useful?  Yes

Great series
by DemonicAzn
August 14th, 2008, 1:38pm
Rating: 9.5  / 10.0
Read all 8 volumes in one whole night. Really enjoyed all of it until the very end. The art was kinda messy in the beginning but it started picking up as it went along. Would recommend it to anyone looking for a manga with echhi-shounen with some romance in the plot. Quite addictive at times when it makes you wanna see what happens in the next chapter. Gets kinda dark in the last volume and it made me felt a strange sadness which all packed into the last 6 chapters, was all too sudden for me.

Though I really would have liked to see what happened to them all after the ending. Was still a great read and would re-read it again sometime in the near future.
Was this comment useful?  Yes

Typical Harem manga.
by Deva
August 6th, 2008, 2:19pm
Rating: 5.0  / 10.0
If you are a fan of the genre you probably will like this one too. It has all important elements and is funny on some level. The story is just ridiculous and completely idiotic, but who cares about the story in Harem mangas ?
Was this comment useful?  Yes