Login to add items to your list, keep track of your progress, and rate series!
Description
Yoichi Karasuma has spent all of his life in the mountains, training in the Soaring Wind, Divine Wind swordsmanship style. Under his father's guidance, he is able to master the technique at the age of 17. With nothing left to learn, Yoichi is sent to a new dojo located in the city so he can continue to train and gain an understanding of modern society.

Unfortunately, Yoichi has no idea how to act or speak to anyone in the present day and acts like a samurai, complete with odd speech and traditional clothing. As he goes to live with the Ikaruga sisters Ayame, Kagome, and Chihaya, at the dojo,... More...
Yoichi Karasuma has spent all of his life in the mountains, training in the Soaring Wind, Divine Wind swordsmanship style. Under his father's guidance, he is able to master the technique at the age of 17. With nothing left to learn, Yoichi is sent to a new dojo located in the city so he can continue to train and gain an understanding of modern society.

Unfortunately, Yoichi has no idea how to act or speak to anyone in the present day and acts like a samurai, complete with odd speech and traditional clothing. As he goes to live with the Ikaruga sisters Ayame, Kagome, and Chihaya, at the dojo, Yoichi, clueless on how to interact with others, is constantly hurtled in hilarious misunderstandings. Less... 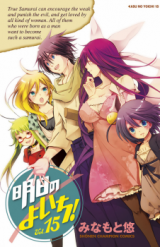 Note: You must be logged in to update information on this page.
Forum Posts Click to view the forum
Can someone just give me a brief summary about this story?
over 10 years ago
What happened to chapter 15 & 16....
over 13 years ago

Some of the characters actually have depth, which sets them apart from many other characters in the same genre that are pretty one-note. This isn't to say that all the characters have depth, just some. Even the protagonist, Yoichi, doesn't have that much personality when you really think about it. He's not a bad character, far from it, but it still irked me that he could solve most problems with ease. He certainly doesn't get any stronger as a samurai, and his character growth is barely noticeable. But Ibuki and Ayame, two of the four sisters, get the most development out of anyone and their great characters. But I have to wonder if it's just because their two of the main girls that they got so much attention.

Oh, and the art's actually pretty good. Everyone is designed well, especially the girls, although for a story with emphasis on swordplay, the actual fight scenes aren't anything special.

I thought this would be a series I would regret reading, but I might read it again if I'm in the mood. Went for the fan service, stayed for the characters.

Crap
by rin645
August 28th, 2012, 1:23pm
Rating: N/A
This manga is crap, the girl beating up the protagonist through out every chapter... and every character has no common sense, all the enemy has stupid reason for fighting. All the scenarios of this manga was so frustratingly stupid too. DON"T READ IT!
Was this comment useful?  Yes

open ending
by lilgeedi
October 17th, 2011, 8:45pm
Rating: N/A
im reading manga end watching anime for over 2 years. what i find very strange is that almost every manga or anime has a open ending why is that so dude what is wrong about ending it realy good especialy harem manga/anime u never see who the main character ends up with. there are some couple of manga/anime that ended realy good actualy the only good manga that ended good whas change 123 end for anime i would say gosick.i liked watching asu no yoichi liked the manga but the end whas realy fucked up

this is so bad
by senior_gir
October 7th, 2011, 12:06pm
Rating: 5.0  / 10.0
after reading to chapter 54 then just getting frustrated and ragequitting to the last chapter, only to find out it was just as bad as the other chapters, it makes me wish i hadn't even read it. each chapter is almost identical, with the only difference being the angle of the panty shots. I litterally mean just the angle. how the panty shot happens is literally the exactly the same way. some miniscule problem happens, so someone uses special move (usually yoichi) and then bam naked women appear followed by him getting a raging nosebleed and half getting killed by a woman (or women). every. damn. chapter. Oh and i forgot to mention that the last chapter had no closure WHATSOEVER. If i had actually had to pay to read this manga, i would have looked around for the author just so i could punch him in the nose for making something so shallow.
Was this comment useful?  Yes

Is it really over?
by remi39
October 6th, 2011, 11:15am
Rating: 9.0  / 10.0
None of the main problems were solved in terms of the parents coming back or figuring out any of the relationships. I liked it but i'll feel dissapointed if it ends like this. Hopefully there's a follow-up manga that gives a complete resolution
Was this comment useful?  Yes

Liked it until the latest releases.
by Jandalman
September 2nd, 2011, 12:37am
Rating: 5.0  / 10.0
The series started pleasantly enough, I mean it was no masterpiece but I'd say it was on the same level as Naruto in terms of readability (ie not the best but still entertaining.) but then the latest chapters have just taken a depressing turn and the main characters just seem so flippin useless AND clueless about all the things that is wrong in their world. The male hero is so infuriatingly pathetic it's painful to read.
Was this comment useful?  Yes

Started out good...
by KLGChaos
May 15th, 2011, 12:01pm
Rating: 6.0  / 10.0
But quickly became repetitive. Girls who beat the main character comedically gets boring after a while (and the girls here make Narusegawa from Love Hina look like a Saint). Plus, there's no progression to the story at all. Just a bunch of different girls falling in love and lots of panty shots. There's nothing else to really keep the manga going outside of that. It's like Love Hina, but without any forward growth of the characters.

As someone who actually enjoys plots and character growth in his manga, this is something I read just when I'm feeling brainless.
Was this comment useful?  Yes

At times funny and great, at others boring, dull and cliche
by dufus397
July 13th, 2010, 3:14pm
Rating: 6.0  / 10.0
Asu No Yoichi started out great, but quickly became a stereotypic ecchi-harem. The action is ok, but that's still not acceptable considering how much the story is focusing on it these days.

Yoichi, the main character, is a samurai that has trained with his father in the mountains all his life. His father, seeing how Yoichi can no longer learn anything there, decides to send him off to a school that teaches the same technique that Yoichi uses, so that he gets some real life experiences.

Yoichi is pretty good for a main character, being this noble person with samurai values, he tries to protect and help all those around him.

After that, it's just Yoichi with four sisters, and normal ecchi. What really brought me in were the chapters that focused on a specific girl(be it one of the sisters, a classmate, or a warrior wanting to kill him) and how that girl was changed by Yoichi's attitude and words of encouragement.
Was this comment useful?  Yes

No Progress
by laxarus
May 24th, 2010, 2:49pm
Rating: 6.0  / 10.0
It started really good but even after 4 volumes it just keeps repeating the same thing with different stories. No progress, character development, or good fighting at all. I am still reading and giving it "6" because i still hope this will turn out to be good.
In short, these are the ratings i give this series:
Ecchi = 9
Harem = 8
Story = 2
Fighting = 2
Romance = 4
Character development = 3