Login to add items to your list, keep track of your progress, and rate series!
Description
Tagamori Shinta is a student who routinely confesses with complete sincerity to any girls that he likes, failing every time with good reason. One day, after another failed attempt, he stumbles upon a strange shrine and ends up making the most important wish of his entire life. A romantic comedy packed with action on a celestial scale. 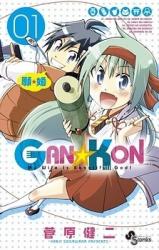 very funny
by whitespade
September 23rd, 2017, 6:27pm
Rating: 9.5  / 10.0
if you want a manga that make you laugh from start to end, this is it. the art is cute and the plot is interesting but not convulated, and especially the gags are funny. you cannot ask more from a shonen comedy manga.
Was this comment useful?  Yes

It was a fun read.
by SangMo
November 4th, 2016, 12:53pm
Rating: 9.0  / 10.0
The comedy and fights were good, I liked the romance, but the ending ruined it from being a perfect score. The ending felt incredibly rushed. It left many unanswered questions.

Spoiler (mouse over to view)
Obviously him and Isana are together, but it leaves it kinda open. He has to deal with the brat child Susanoo and he gets a letter right at the end from her father saying he won't give up his daughter. For it to be all about his marriage to Isana, it would have been nice to actually see the ceremony and them being officially married.
Was this comment useful?  Yes

Friendly Warning
by Anonymous
February 10th, 2015, 3:48am
Rating: 6.0  / 10.0
Just a warning for those picking up this manga: it's heavily gag like. <---- Makes it sound like I really hate this manga, but that's not what I mean. What I mean is that the thing this series revolves around is humour. So my prediction is that due to the silly powers the main couple have been getting and the general lack of seriousness in the manga, I'd expect stuff to happen (battles, romances bits etc.) but then in the end it will feel so shallow as not to even exist in the first place (i.e. first and last chapters will have very little change to the entire series).
I was going to tag it as gag, but I'm a noob so I'd rather not label incorrectly.
Anyway, I seek character development and not copious amounts of humour, so peace, I'm out of here, but might be worth checking out for someone who wants a good laugh.
Was this comment useful?  Yes

Well this is surprising
by Zepheris
July 15th, 2012, 4:57am
Rating: 10.0  / 10.0
Did not expect to actually enjoy this given how much i hate most shounen material and yet i am amused and entertained far longer than i expected for a shounen series, interesting... so this sort of male protagonist can still pass through my mental filter... when most others similar to him failed...

Hmmm, now i understand... the male protagonist still have a fair amount of tsukkomi element in him, and not entirely immaterial.

So we have a shounen action comedy with a tsundere goddess(possible goddess anyway), a young male protagonist who is usually the boke but sometimes the tsukkomi, and a hilarious circumstance.

Yep, that sits fine in my book as long as the male protagonist retain his tsukkomi parts..