Login to add items to your list, keep track of your progress, and rate series!
Description
Haru, a fun, lovable, easygoing guy, has a problem, he nearly burnt his girlfriend to death with his power. Meanwhile, another serial arsonist is on the loose, and there are rumours of strange incidents having occurred before! Could there be more people with unexplained powers? What will happen to the human torch? 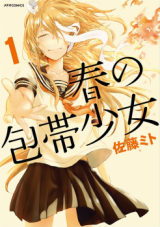 Gripping story of a couple's circumstances
by Dr. Love
August 26th, 2015, 9:56am
Rating: N/A
The story keeps you interested from the start, and it has a special charm to it that makes you want to read the next chapter. As this is an adequate mystery the puzzle pieces slowly start to fit together in a natural way. The superpowers tie in well with the story in a realistic way, as if it could actually happen.

The characters are fleshed out and not one-dimensional. The ones in the center are the couple, Haru and Natsu, who are adorable and have each other's best interests in mind. Sadly, because of that, few things could've been avoided if they'd been straightforward. However I feel like they came stronger out of this ordeal, learned out of it and now appreciate each other more. There are some loose ends but not really critical to what the story was trying to portray.
Was this comment useful?  Yes

A heartfelt and very mysterious love story
by residentgrigo
March 16th, 2015, 5:16pm
Rating: 7.5  / 10.0
Well the manag came to an end and 2 reviews are not amused. Shrug. The ending works fine for me so i down-voted the "new" Rushed Ending / Axed (a lot are mine btw.) but the manga had more story in it i will admit.
The narrative is good overall so i can recommend it to a very broad audience.
The romance aspect was very heartfelt and the art caried emotions very well. The new Hiniiru is a but similar and to a 8/10 start so let´s move over to that and i look forward to Mito Satou´s next work.
Was this comment useful?  Yes

Horribly Disappointing
by malk
March 14th, 2015, 3:18am
Rating: 4.0  / 10.0
I had incredibly high expectations for this manga as it started with a really interesting romance plot with a superpowers/mystery subplot. It looked like it could really develop into a very interesting and psychological manga. The last two chapters were soul-crushing for me. The fact that this manga was axed is very apparent with the one-dimensional horridly cliche ending this manga got. The development of the only character that got development actually harmed my opinion of her. The turn from promising to cliche and bland was quick.

Another Axed Ending
by SNaG21
March 13th, 2015, 7:54pm
Rating: 5.9  / 10.0
I've been running into a lot of these lately. Anyway, this manga has nice (albeit underdeveloped, but that's not wholly the fault of the mangaka) characters, awesome ink work, an interesting supernatural element, and a cool mystery. Unfortunately, because it (presumably) got axed, the characters (outside of the eponymous Haru) got almost no development, staying one-dimensional.

As a result, the ending is dumb. However, the manga is worth it just to read through the relationship between the principal characters, which is pleasant without being sickly sweet.

after the first chapter
by Lorska
January 1st, 2013, 3:57pm
Rating: 8.5  / 10.0
The artwork is nice, the characters are pretty standard, but there's nothing that doesn't fit, or is annoying.
So far you don't know why or how exactly he burnt anything, but this is only the first chapter. The premise is pretty interesting, but we'll need more to see if this is headed in a good direction.

Keep this in mind and watch out for more.