Login to add items to your list, keep track of your progress, and rate series!
Description
Kurosaka Gengo is just your normal highschool boy, who likes to skip cleaning duty. However, Gengo's peaceful life ends when he comes across a strange man. That man claims to be an alien and is in need of Gengo's body to survive on earth. Not only does Gengo deal with the alien, but with others that are after him! 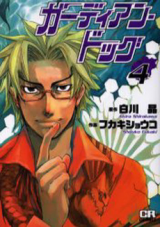 lacking in execution
by whitespade
April 14th, 2014, 10:18pm
Rating: 7.0  / 10.0
the whole thing is there - great plot of god vs devil, likeable characters, interesting superpowers, good art - however the execution is quite lacking. everything feels so rush, and somehow volumes of backstory seems to be eliminated. i dont know whether its because two people are working on this, there is certainly a lot more needed to be filled.

still, the idea is good, so i am quite entertained.
Was this comment useful?  Yes

Lost Potential
by MangaGhost
April 12th, 2012, 12:00am
Rating: 6.0  / 10.0
Reminded me a little of Kiseijuu (Parasyte). It had a few interesting ideas, but the story was told poorly and was choppy. It definitely felt rushed and not fully fleshed out, which is a shame because I thought it had some potential. I would have liked to have seen more character development and interaction. Art wise I thought it was pretty decent. I liked the freckles on teacher's face and Ishtar was drawn pretty nicely. Main character was just bland and not much to him. His 2 female high school friends were not much better. One was just a glasses girl with a crush, the other a tsundere type and that pretty much defined them. There was almost no background on glasses dude, he was just the guy who knew everything even more than the "God" in the story. He basically filled the role of explaining everything to the readers, which wasn't too great. Most of the characters were very 2 dimensional, only the teacher was more rounded out as we knew who she was, how she came to be, what her motivations were, her goals, her abilities were more clearly defined, etc. Again this could have been a really good story instead its just barely mediocre.
Was this comment useful?  Yes

Meh...
by VampireBanana
August 8th, 2011, 10:22pm
Rating: N/A
I read till mid-way in vol 3 before I gave up on this. Reason being there was a ton of action scenes but the plot moved at the pace of a snail, unacceptable for a short series like this. There were a ton of characters but they often spent most of their time fighting and acting without thinking. There were hardly any defensive measures being taken and I got fed up watching the enemy rushing in wildly, like a maniac chicken on a triple dose of heroin. It was also painful seeing the main character still being mostly clueless about his powers in vol 3 and it was even worse when many of the characters were also equally clueless about their actions.

The action wasn't too bad, though and the abilities and powers of the characters were nice and reminded me of Kiseijuu. Too bad much of the manga wasn't as well thought-out.

The best impression leaving manga I've read
by Fakt
August 5th, 2010, 11:52am
Rating: N/A
I have read many countless mangas, i know that after awhile your view of manga changes and how easily unimpressed you get after so much of the same over and over again, but i must say this is one of the best ive read in awhile.

My ruling for Mangas:
No mangas deserve a 10 unless it made you want to buy all of the copies just for the sake of giving money to the creator

A must read. Dont listen to MY opinions give it your own

Wierdly bad
by Regnak
April 28th, 2010, 11:35pm
Rating: 7.0  / 10.0
Started off quite interesting and somewhat similar to Kiseiju. The art and characters are quite nice and appealing. However the story was completely trashed.

The story felt rushed and was badly told with a lot of missing spots. Might be because it was cut short, but either way it felt half-assed.

Had high hopes, but ultimately it fell short of its potential.

Impressive
by mystichead
April 18th, 2010, 3:44am
Rating: 8.5  / 10.0
As stated previously, for a shounen its pretty darn impressive. there is character depth and development as well as having a decently complex yet simple plot(a rare feat). The only gab i have about this is the ending was somewhat rushed, while it was somewhat unexpected (aint spoiling it, READ IT), i would say the plot was developing in a good pace and would have lasted up to a couple more volumes. It was a good ending, showing that even though it was rushed it was well thought out

Despite this i say give this a shot. it doesn't lack depth like most shounen (mind u i like shounen), it ends at a decent spot without dragging or without being completely off-course like other shounen/shoujo, the distributions of powerups is sane and a good plot device rather than having constant stronger enemies and stronger good guys.

As a critic, and one who prefers seinen over shounen, I still conclude that this a worth-while manga, just because the elements involved and its originality in at least in the ending devices

Lack of build-up
by yuno19
April 17th, 2010, 9:13am
Rating: 6.0  / 10.0
The moment i start reading the last chapter, i remember a manhwa called threads of time. This manga and that manghwa have things rushed, ends kinda forced. For each things concluded whether at every flag or at the end, i can only shocked "huh? huh?" Maaan, if only some build-up is in order, people will follow easier, and the story this manga offers would be told perfectly..

Overal, this is a good manga. Kinda reminds you to 'kiseijuu' by mangaka who also write 'historie' (who's his name again?), but with minimal emotional content. Good at one side, but unexploited moments of truth make this bland compared to that of 'kiseijuu'.

Worth score nine from average score giver, but I am a stingy reader who don't know how hard to write manga, thus only concerned by presentation toward the audience. six from me.
Was this comment useful?  Yes

Pretty impressive for a shounen
by tailor31415
April 15th, 2010, 4:49pm
Rating: N/A
The good thing about this series is it didn't try to drag on and make the plot more complicated or anything extreme. The length was very good. However, the main character didn't do as much cool stuff throughout as I wished he would, but the ending kinda made up for it.
Ending itself was spectacular compared to normal shounen endings!! Definitely unexpected, but even so, it made me very satisfied at the end.
The art style was a bit new at the beginning, but by the end, I appreciated it as an amazing style!
All in all, great series! A good read for a boring week/weekend!
Was this comment useful?  Yes

Hmm not bad
by John21
April 12th, 2010, 12:12pm
Rating: 9.0  / 10.0
Awesome art. Nice powers and the plot is ok. The action scenes are a bit hard to follow but its definetly interesting as characters seem to have different agendas, plus female heroine is a total noob regarding how humans live which leads to some nice comedy as well. Also the backgrounds of this whole alien business is quite intriguing. You find out new things about the characteristics of the aliens in every chapter. Its not something that will blow you away but still its a good read.

EDIT-: Ending was not upto my expectations and was actually not that good.