Login to add items to your list, keep track of your progress, and rate series!
Description
From Juné Manga

Onoda is a straight guy and he is three years younger than Harumi Deguchi. They have nothing in common and at first, they were just friends. But that’s not enough for Harumi- he wants more from Ryo and he realizes that he has fallen in love with him. Feeling anxious and emotional, he wants to tell him how he feels… but he can’t. Fearing rejection, he’d rather be just friends and not ruin what he has with him. Here- we have a story of pain, sorrow and happiness of being in love. 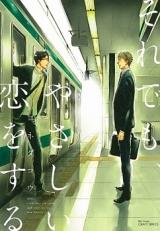 Cute!
by sofistree
September 21st, 2016, 2:19pm
Rating: 9.0  / 10.0
I don't love it quite as much as the main story, but the two in this one are pretty adorable! I'd actually have loved to see the main four hang out more - they all have such good chemistry!
Was this comment useful?  Yes

I give it a 10
by Yoneko
September 28th, 2015, 9:44pm
Rating: 10.0  / 10.0
I love all Yoneda's works. (I still cry for the unfinished and unpublished.) She never lets me down tbh. This one is so entertaining. I wasn't very fond of Onoda when I read Doushitemo Furetakunai but I liked Deguchi a lot since his brief appearances back then and now I love him, and now I'm good with Onoda so of course I loved this story!

Subtle and intense
by jellaaay
July 25th, 2015, 10:01am
Rating: 10.0  / 10.0
Since reading Doushitemo Furetakunai, I've been a fan, and this spin-off just made me like Yoneda Kou all the more. I'm sure fujoshies are open to just about any type of story when it comes to yaoi, but if you want to taste a bit of what realistic relationships are this one is definitely a must! There are plenty of adorable moments that will keep you hooked. Read till the very end!
Was this comment useful?  Yes

Nice
by MirayAllen
September 25th, 2014, 9:49am
Rating: 8.5  / 10.0
This was an entertaining reading. Onoda is one of my favourite side characters and, every now and then, I enjoy reading this spin-off. The prequel to the previous doujinshi ("Hours" and "Colour") was indeed a great addition, as we came to know a little more of Deguchi's character and motive.

I really appreciate the fact that Onoda remained true-to-form, also. Like the man himself, I don't agree that he's big-hearted at all (haha) and that he comes across as someone who genuinely cares about others (even though he doesn't, not particularly) makes me like him even more. Onoda is just really put together, a man who's hardly surprised at anything, and who prefers his relationships to remain perfectly one-sided. You can see, here as well as in Doushitemo, that he's not the type to meddle with other people's business. The way he reacted to the confession was, I think, very in-character. The thing shook his world a little bit but, on the other hand, he felt flattered.

Spoiler (mouse over to view)
and of course he was disappointed when Deguchi confessed to sleeping around. You don't have to excuse yourself Onoda-san! It was really mean what you said but you made perfect since, somehow, haha

That he wanted to wait and think about it made sense. I wish more mangakas resorted to that method instead of uncritically throw semes/ukes at random on their respective lovers and call it love. The fact that Onoda was mean to Deguchi, however, is quite another matter. It's terrible sure, but it was also expected of him, because Onoda is so obviously that kind of subtle, very charming calculating guy (and yet not so calculating that he wouldn't feel bad about it). Ha! It's really great. It was a marvelous characterization throughout. And then Deguchi was alright too, I guess. He is just like Onoda's ex-girlfriend (so-called). Iron-willed, someone who know what he wants and is not afraid to fight for it. His heart is always at the bottom of his throat, prepared to throw a tantrum. It is bigger than Onoda's, that's for sure. They balance each other out, somehow.

As regards the romance, the plot and the overall mood, the whole thing is very much in sync with Doushitemo Furetakunai, which is a blessing. Yoneda Kou never leaves you hanging. This one does not excel the original in quality or character design in any way, but it is a welcoming addition to it. I missed Shima-kun and Togawa immensely and I love that they come together in the end. It was lovely :3

Not my favorite Yoneda's, but still Yoneda's
by Akako
June 14th, 2014, 9:39pm
Rating: 9.0  / 10.0
I was running in circles not knowing what rating I want to give this. I like Deguchi very much, now even more with the introduction of the first chapter telling how he got involved with Onoda.
Spoiler (mouse over to view)
He is a little mean when he blames Shima for falling with a straight guy, but that's how human he is, even if you previously thought you wouldn't let that happen to you sometimes you just can't say "No" to love.
Onoda on the other hand isn't that likable. He's also human, with his hesitation and all, but I don't like how he hurts Deguchi in the process, making him anxious because he needs time. This let-me-think-what-I-want kinda pisses me off (saw it in Yoneda's Reply and didn't like it there either). It's not that I am against it and again, life is like that, it's just a turn off for me.

Despite this, Yoneda manages to convey emotions so well through her beautiful art and witty dialogue that I can't deny her. And the last chapter made me incredibly happy.
Spoiler (mouse over to view)
When Onoda suggested that he and Shima should go drinking with Deguchi, my hoping was that Togawa will show up as well, he's one of my favorite semes <3.
Was this comment useful?  Yes

Better than Doushitemo Furetakunai
by 801crazed
June 10th, 2014, 10:11am
Rating: 9.5  / 10.0
Although this volume is a spin off from Doushitemo Furetakunai, it has higher quality writing is much more enjoyable. The original story was a bit too typical but this was a breath of fresh air when I first read it.

Yoneda showed love to be painful and complex, as it is in real life. Not the shmoozy and angsty stuff in many other BL with a similar plot line. Even the humour in the manga is not cheap. A highly entertaining and touching manga!

Oh and the new stories that Yoneda add so much more depth to the series. The new prequel especially gives us insight into how Deguchi met and fell for Onoda in the first place (though it was mentioned earlier, this chapter really fleshed it out).
Was this comment useful?  Yes