Login to add items to your list, keep track of your progress, and rate series!
Description
Reunion proves painful and brings up unresolved feelings when stepbrothers Shuuya and Kyou meet again.


Associated Names
Person Being Waited For
Person Who Waits 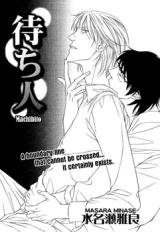 Rushed & ends with a bitter taste.
by Yankee-chan
October 6th, 2013, 9:42am
Rating: 5.0  / 10.0
Well, it is a oneshot and therefore, there isn't much space for character or plot development. Still, it would have been nice, if it wasn't that rushed and focused on getting the characters together physically. Even after the ending it felt like they are far apart from each other on the emotional level and ...

Spoiler (mouse over to view)
Seeing the one stepbrother turning into an impatient manipulator, right after he told the other one he would wait, just left a bitter taste. That's exactly what I meant, about them being far apart emotional, just like the few words the one being pursued said all together. Lol.

Another "no shades of gray"
by Amitielle
July 22nd, 2011, 1:58am
Rating: 6.5  / 10.0
I realized while re-reading most of Minase Masara-sensei's works that, even if the style is good, the graphic is really poor when it comes to details and shades. I understand that if the drawing is simpler it may be more beautiful and good, but this just hurt my eyes. It's too much white and a little black. It's as if it's unfinished.
Regarding the story...well, not much to say. The plot is not that complicated because it's an oneshot and basically it's about a reunion. I kind of realized that most of sensei's work is the same. The same kind of plot, same kind of characters...nothing changes much.
It's good as it lasts but if she keeps this, all her work will become boring.
I don't mean to offend. I like her, but sometimes I live under the impression that she becomes lazy and her ideas won't change much.

Cuttie!
by kurosu_yuuki
June 4th, 2010, 2:57pm
Rating: 7.0  / 10.0
It's basically about sex...the plot isn't exacly new (that's why I don't like oneshots much, though).
The ending is a little surprising.
And although I don't give a damn about incest, it actually creeped me out a little. And they weren't even real brothers! And there a lot of mangas where the characters are brothers and I don't mind at all...strange.

Oh, but the art is fine!

Deftly Delivered Comment on the Selfish Nature of Love
by MightyMaeve
February 11th, 2010, 7:02am
Rating: 10.0  / 10.0
OH! So far, out of all her one shots that I've read, this one is by far superior to the rest. The artwork is clean and beautiful, not overly toned, but what really shines is the snappy story.

Wow! I just love the surprise twist at the end! It is built up perfectly--when I read over it a second time, there are lots of cohesive hints about Kyou's growing desperation not to be alone--but it was still a surprise when I arrived at the end revelation!

...:)
by Sakura_Hikizaki
September 10th, 2009, 8:58pm
Rating: 8.0  / 10.0
I personally enjoy stories of love betweem stepbrothers. This one of Minase sensei's older works for sure. It was short and the story so fast that I didn't enjoy it as I would have if it was a little longer.

But over all a good read, but not one of sensei's best work.
Was this comment useful?  Yes